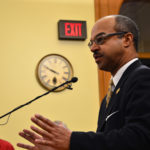 In this file photo, Sen. David Haley, a Kansas City Democrat, testifies during a Senate committee hearing on Thursday, Jan. 29, 2015, at the Statehouse in Topeka. Haley recently introduced a bill that is expected to reduce the number of wrongful convictions in Kansas due to eyewitness misidentification.

A bill that is expected by some to reduce the number of wrongful convictions in Kansas because of eyewitness misidentification passed the Senate on Thursday.

The bill, originally introduced by Sen. David Haley, D-Kansas City, passed on a 38-1 vote with only Sen. Mary Pilcher-Cook, a Shawnee Republican, opposing it.

The bill in its current form is not as stringent as the original and does not require the videotaping of police interviews of suspects, but it has broad support of the law enforcement community. It now goes to the House.

If passed, the bill would require law enforcement agencies to adopt written policies on procedures that police use to gather witness identification evidence. The bill also recommends that the policies that police agencies adopt incorporate best practices that the National Academy of Sciences, the International Association of Chiefs of Police and others have endorsed.

Some of those include:

• Ensuring the officer who administers a police lineup does not know the suspect’s identity. This is to prevent the officer from making unintended cues to the witness.

• Instructing witnesses that the suspect may or may not be in the lineup and even if the witness is unable to identify a suspect, explaining to the witness that the investigation will continue.

• Ensuring that nonsuspects in a lineup match the witness description of the suspect so that no one in the lineup stands out.

• Having eyewitnesses provide a statement in their own words describing how confident they are that they selected the right suspect. That statement should be in writing.

This year’s bill is a result, in part, of the release of Floyd Bledsoe from prison. Bledsoe spent almost 16 years behind bars for a murder his brother admitted doing.

Bledsoe had been pushing for the requirement that police interviews be recorded because he said he might not have been wrongfully convicted if jurors had been able to see or hear his brother’s confession and see or hear him express his innocence.

But Haley said the bill still is a good step forward in implementing safeguards against witness misidentification.

“This is a good start towards insuring consistent identification standards,” he said. “I am genuinely glad to see common sense legislation finally proceed that will improve public participation and accuracy in identification.”

The Innocence Project has studied the problem and says “eyewitness misidentification is the number one contributor to wrongful convictions.”

The nonprofit organization studied 337 cases of wrongful convictions and found that in 71 percent of them, 238, eyewitness misidentification played a part.

The study found that of the 238 wrongful convictions, 97 actual perpetrators were later identified. They had remained at large, in some cases committing more crimes, and were later convicted of 100 additional crimes including 64 rapes and 17 murders.

“Wrongful conviction is the gravest violation of personal liberty and also poses severe public safety risks, as the real perpetrator could remain on the street,” an Innocence Project news release said.