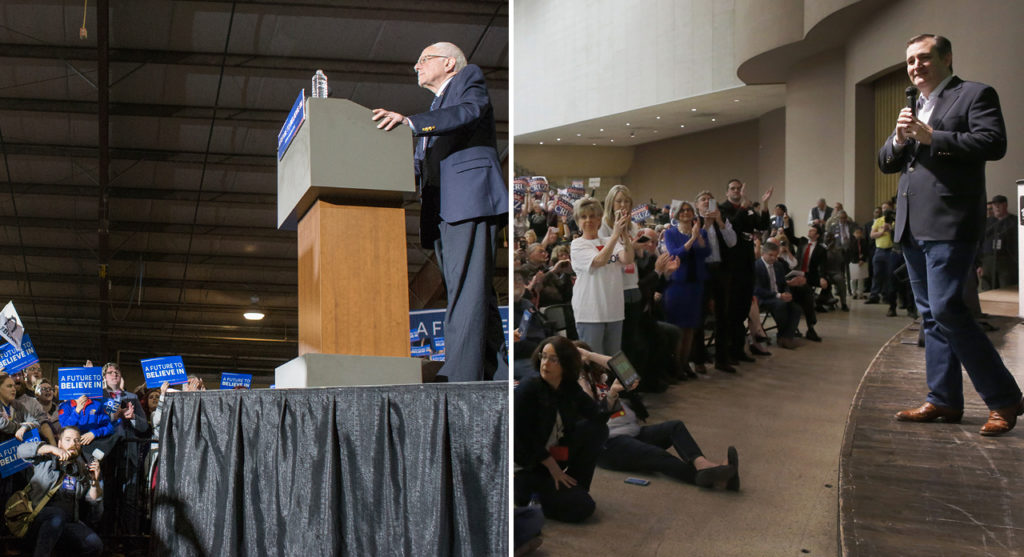 At left, Democratic presidential candidate Bernie Sanders speaks to a rally crowd at the Douglas County Fairgrounds in Lawrence on March 3, 2016. At right, Republican presidential candidate Ted Cruz speaks to a crowd at a Wichita caucus site on March 5, 2016. Both secured victories in their respective parties' caucuses in Douglas County and Kansas statewide.

A big turnout in Douglas County for Vermont Sen. Bernie Sanders helped push him over the top in the Kansas Democratic caucuses on Saturday, while Texas Sen. Ted Cruz won both the local Republican caucuses and the statewide GOP vote.

Both Sanders and Cruz took Kansas by more than two-to-one margins over their nearest rivals, according to preliminary vote totals from both state parties.

More voters than expected turned out for both the Republican and Democratic presidential caucuses Saturday in Douglas County.

Long lines at the GOP caucus in Lawrence produced some frustration and anger. And so many turned out in the Democratic caucus that hundreds of voters had to gather outside on a middle school football field to be counted.

Sanders also won by a huge margin, 78-22 percent over Clinton, at the 3rd District caucus site in Eudora.

Statewide, the Kansas Democratic Party said, Sanders beat Clinton, 68-32 percent out of just more than 39,000 caucus votes counted. As a result, he will get 23 of the state’s delegates to the Democratic National Convention, while Clinton will receive 10. The party will also send four “super delegates” who go to the convention not bound to any candidate.

On the Republican side in Douglas County, where 2,407 ballots were cast in Lawrence and Baldwin City, Cruz led with 37 percent of the vote, followed by Florida Sen. Marco Rubio at 20 percent; Donald Trump with 18 percent; and Ohio Gov. John Kasich with 16 percent.

The total GOP vote in Douglas County also included 190 provisional ballots that will be counted within the next several days, according to Douglas County GOP Chairwoman Kathleen Ammel.

Statewide results showed Cruz finishing with 48 percent of the vote, followed by Trump with 23 percent; Rubio with 17 percent; and Kasich with about 11 percent.

“The scream you hear, the howl that comes from Washington, D.C., is utter terror at what we the people are doing together,” Cruz said while campaigning in Idaho on Saturday, according to the Associated Press.

Of the 40 delegates Kansas will send to the national GOP convention, the party said, Cruz will get 24, followed by nine for Trump, six for Rubio and one for Kasich.

In Lawrence and elsewhere in Kansas, turnout for both parties’ caucuses exceeded expectations and left some wishing that Kansas would reinstate traditional primary elections.

The Kansas Democratic Party said about 39,000 people participated in this year’s caucus, up from 36,723 who took part in the 2008 caucuses.

The Kansas Republican Party reported turnout in this year’s caucuses was about two and a half times that of 2012. More than 81,000 voters took part in the Kansas GOP caucuses this year, compared with 29,857 votes four years ago.

“Reports from dozens of county locations indicate that turnout is often four or five times that of 2012 and growing,” said Kansas GOP Chairman Kelly Arnold.

The large turnout left some voters frustrated and even caused some to not cast a ballot at all.

“My wife and I allotted 40 minutes to come to the caucus to cast our vote, and due to the delay in the process we are unable to stick around and vote,” said Steve Conley, a Lawrence Republican. “We just cannot say enough about how sad that is, the whole process of not being allowed to cast a ballot in 45 minutes of one’s day.” 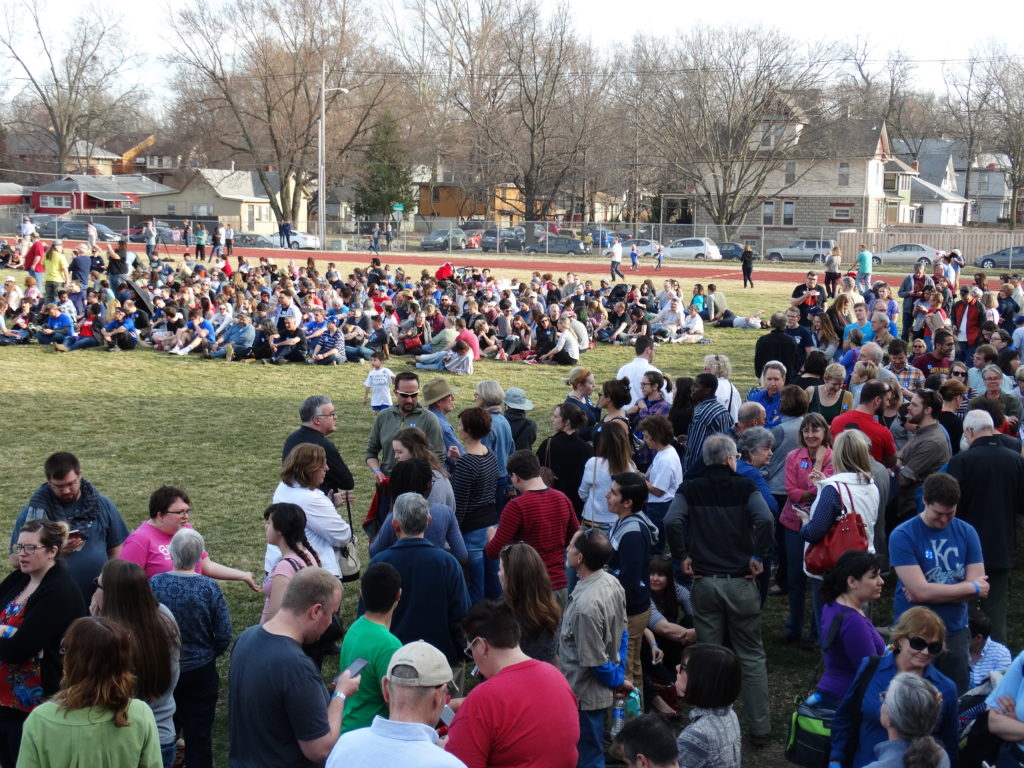 So many voters turned out for the Democratic caucus in Lawrence that two gymnasiums could not hold them all. Hundreds of voters stood outside on the football field to be counted.

Republican officials said a slow Internet connection at Southwest Middle School caused delays in early voting, with some voters having to stand in line 30-40 minutes just to verify their voter registration.

But that didn’t dampen the spirits of all GOP voters, including Cori Tate, a Free State High School student who cast her very first vote in any kind of election Saturday.

“I think it’s interesting,” she said. “I like how casual it is. It seems like everybody is just here to participate, and I think it’s good that everybody’s here to vote for the person they want to be president, and have a say in the process. I just think it’s great.”

But Vera Cole, who said she’s accustomed to voting in traditional primaries, said she did not enjoy the time spent listening to campaign speeches before the votes took place.

“I want to vote,” she said. “I’ve already read. I already know. I’ve listened. I don’t want to come and listen. I only have time to vote. And I don’t like the idea of 10 a.m. to 2 p.m. Four hours? Look at the crowd. It’s not fair to people. Look how many wheelchair people we have.”

For Democratic voters, the process was longer because instead of casting paper ballots, as Republicans did, they had to physically stay in place, in some cases for hours, to be counted.

At Liberty Memorial Central Middle School, hundreds of voters were still standing in line trying to get in by 3 p.m., when all voters were technically supposed to be in place. Those who showed up early quickly filled the large gymnasium, and the overflow Sanders crowd was sent to the smaller gym.

But within an hour or so, that gym also filled to capacity, and hundreds more voters were sent outside to the school’s track and field area to be counted.

Still, most Democratic voters remained upbeat about the process, at least as they were standing in line waiting to get in. 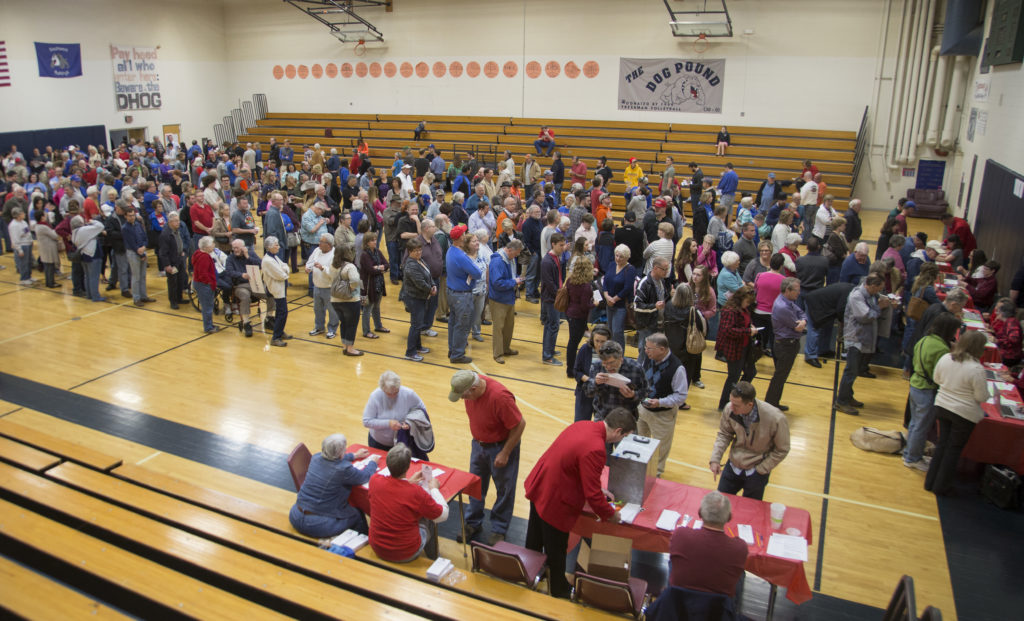 “I think this is great, and I think the amount of millennials here and the people age 18-25 is amazing, and it’s showing just how passionate we are about this race,” said Brianna Woods, a first-time voter.

“It’s great. I love the weather. I was here eight years ago, and I’m comparing it to that,” said Terry Smith, referring to the 2008 caucuses that were held during an ice storm on Feb. 5 that year.

Her husband, George Smith, said he had no preference between the caucus process and traditional primaries.

“Either way. Whatever gets participation,” he said. “I wouldn’t say that (the caucus) is any better, but it does give people the chance to make their case.”