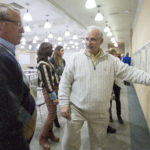 Daniel Rowe, right, of Treanor Architects, discusses one of 11 proposed ideas for a mental health crisis intervention center with Lawrence resident David Johnson during a public design workshop on Tuesday at Bert Nash Community Mental Health Center, 200 Maine St. Johnson said that incorporating the beauty of the surrounding park was important to him when considering the designs.

At the conclusion of a daylong design workshop for a proposed mental health crisis center, Amy Warren said she could see the influence she and other Bert Nash Community Mental Health Center employees had in the early planning of the center.

Warren, the Bert Nash director of adult services, was among the Bert Nash staff members who met Tuesday morning with architects from Treanor Architects on the design of the proposed mental health crisis intervention center. Two afternoon sessions at Bert Nash followed, at which the public was invited to join Bert Nash staff to share ideas for the crisis center. The work session ended with staff and public commenting on 11 floor plans that architects developed from the day’s earlier discussions before those present voted for their favorites.

Treanor Architects President Dan Rowe said the input would help the architects come up with a design that would be embraced by its staff and the community it serves.

“I hope at the end of this, you feel like you own it and tell people in the community you designed it,” he said.

The floor plans reflected the programmatic functions Bert Nash staff and the public advocated for the crisis center during Tuesday’s workshop and at a design charrette Treanor and Bert Nash hosted last month. The proposed floor plans provided space for both short-term and long-term voluntary care, more secure space for those receiving treatment involuntarily and a substance-abuse detoxification room.

The floor plans differed in how those programmatic elements were arranged around spaces for administrative, support and law enforcement uses and areas reserved for public entry and visiting rooms.

Other elements all designs shared were courtyards that would give patients access to sunshine and fresh air. Rowe said more such areas could be further developed when designs were completed for the surrounding landscape.

The public and Bert Nash staffers culled the 11 original floor plans to three by placing a sticker on their favorites. Rowe said architects from Treanor would use those three selected floor plans to start the architectural work of developing two or three early concept designs for the crisis center. Those drawings would be shared with Bert Nash staff and the public at another workshop in about 30 days, he said.

At the work session, Shaw said the crisis center’s proposed site benefited from its location directly to the south of the pond in the Sandra J. Shaw Community Health Park. He noted, however, that the 11 proposed floor plans were sited partly on what is now a Lawrence school district maintenance yard.

Douglas County Administrator Craig Weinaug said the county was in negotiations with the school district to acquire the Second Street yard through a property trade. The county and school district have exchanged valuations for the properties involved and are negotiating a money exchange needed to make the swap work, he said. While he was hopeful something could be worked out, that was not guaranteed, he said.

Another possible change — the closure of Second Street south of the crisis center — would require the city of Lawrence’s approval. Rowe said its closure would help create a campus-like feel at the site, but that the Lawrence water department’s needs might dictate the street remain open.

The Douglas County Commission and Bert Nash entered a memorandum of understanding in November that will have the county build the mental health crisis center on land Bert Nash owns north of its home in the Community Health Facility.

Although the County Commission agreed Feb. 24 to link consideration of building the crisis center with the expansion of the Douglas County Jail and the creation of a mental health court, it has yet to decide on how to finance the construction of either project.