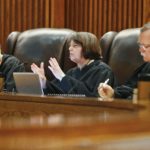 Kansas Supreme Court Justice Marla Luckert, center, asks a question to the state as they make their arguments in front of the Kansas Supreme Court, Tuesday May 10, 2016, in Topeka, Kan. The court was hearing arguments Tuesday on whether the technical changes approved by lawmakers earlier this year are fair enough to poor districts that the justices can abandon a threat to shut down public schools. (Chris Neal/The Topeka Capital-Journal via AP)

Topeka ? The Kansas Supreme Court said Tuesday that it is satisfied with the Legislature’s action last week addressing school funding equity, and it will not issue any other remedial orders such as closing public schools.

“In short, the legislature has currently satisfied the court’s orders in Gannon I, Gannon II and Gannon III regarding equity. Therefore, no judicial remedy is necessary at this time,” Chief Justice Lawton Nuss wrote in a two-page order, referring to the court’s first three decisions in the case Gannon v. Kansas.

Alan Rupe, an attorney for the plaintiff school districts in the case, said those districts “are extremely pleased that schools will be opening in the fall and that funding will be distributed in a manner that comports with the Kansas Constitution’s equity requirement.”

Previously, the court had said that the method of distributing two kinds of aid among school districts failed to meet constitutional standards because some low-wealth districts had to levy higher property taxes than wealthier ones to achieve comparable levels of funding.

That included equalization aid for local option budgets, or LOBs, which are the additional funds districts can levy on their own over and above their general state aid, and capital outlay budgets which pay for big-ticket purchases such as new equipment, furniture and building repairs.

The court said in February that both equalization formulas were unconstitutional, and lawmakers responded by amending both formulas.

The court reviewed those changes and issued another opinion May 27, saying the Legislature had cured the problem with capital outlay equalization, but that aid for local option budgets was still unconstitutional, and it gave lawmakers until June 30 to fix the problem.

That prompted a two-day special legislative session last week that resulted in lawmakers coming up with a bill that added $38 million in LOB equalization and reinstated an earlier formula that the court had previously upheld as constitutional but that lawmakers had repealed in 2015.

Gov. Sam Brownback signed that bill Monday, and the state and the plaintiffs submitted a joint stipulation to the court that day saying they agreed that the new bill met the Kansas Constitution’s requirement for equitable funding.

Tuesday’s court order puts an end to one portion of the ongoing litigation. But Nuss said in the order that the court will next turn its attention to the other, more significant portion challenging the overall adequacy of school funding.

There, plaintiffs are seeking upwards of $500 million a year in additional base state aid for public schools.

In the time since the lawsuit was filed in 2010, lawmakers also repealed the base aid formula used at that time and replaced it with a system of block grants that essentially froze each district’s funding in place for two years.

Lawmakers are expected to write a new school funding formula during the 2017 session, but the Supreme Court’s decision in the adequacy portion of the case could have a significant impact on the Legislature’s actions.