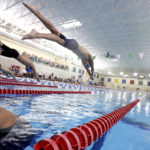 In this file photo from July 2014, a swimming meet is held at the Lawrence Indoor Aquatic Center.

This week, a group of engineers will finish the final of 40 “energy audits” on city-owned buildings and facilities.

As with other Lawrence facilities, including fire stations, recreation centers and parks, 360 Energy Engineers will check City Hall’s lighting, heating and cooling systems, water usage and insulation. The audits, which have been going on across Lawrence the past two months, are part of an effort to install efficient equipment to save energy — and money on utility bills.

“The main goal of the program is to address energy efficiency in our city buildings, not only to save energy but to save money for taxpayers,” said Eileen Horn, sustainability coordinator for Lawrence and Douglas County. “At the same time, we can address deferred maintenance in our public facilities.”

Lawrence has not bought into anything yet, besides the audits.

On May 24, the City Commission unanimously approved a contract with Lawrence-based 360 Energy Engineers, a business started in Kansas University’s Bioscience and Technology Business Center. Engineers will finish auditing the city facilities and then compile a list of possible projects to present to commissioners.

If the City Commission decides to move forward with some of the projects, the cost of the audits — $64,000 — will be rolled into the overall project cost. If commissioners decide to opt out, the city will owe 360 that sum.

The audit results, project recommendations and estimated costs are likely to be presented in August, according to information Horn provided to commissioners. The commission could direct 360 on what projects it wants to pursue, and plans would be crafted into September. If it were to gain approval, 360 would work on designs this fall, hire subcontractors, then start on the projects in early 2017.

“There’s a lot of ‘ifs’ in there,” Horn said. “If the commission is supportive and approves the project, people would start seeing improvements in buildings in January 2017.”

Through the system, 360, an energy service company, would work under state contract, and Lawrence would pay back the project costs.

“The biggest challenge we’ve always run into with addressing energy efficiency in our buildings is that sometimes the more efficient option is more expensive up front,” Horn said. “Yes, you may save money by buying that energy-star piece of equipment or that LED light, but your budget for that year gets dinged by trying to make that purchase.”

Horn said she did not yet have an estimate of what the overall costs would be.

Engineers with 360 have audited all city recreation centers, besides the new Sports Pavilion Lawrence, and every fire station except for the under-renovation Fire Station No. 1. The indoor and outdoor aquatic centers were checked out, as were the Community Health Building, Lawrence Arts Center and all of the buildings at Lawrence Municipal Airport.

City staff and engineers chose buildings that are “energy hogs” to consider for improvements, Horn said. They analyzed the cost per square foot of energy bills and found what facilities were in need of maintenance.

For example, the Indoor Aquatic Center has corroded lighting, and staff has problems with controlling humidity there, Horn said. Engineers will present what’s required to fix those issues, how much energy would be saved and how much it would cost.

Horn said she’s been trying in recent years to get the city to consider projects through the state’s energy savings program. It finally has “momentum,” she said.

“This is exciting for a million different reasons,” Horn said. “This could be an innovative model for us as a city about how to be proactive with our buildings and address those energy needs before the equipment breaks. When it breaks, we have to go buy whatever is available off the shelf. We can be more proactive and address those needs and get in front of it.”