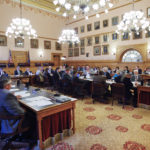 The Kansas House and Senate Judiciary committees discuss how they can respond to a Kansas Supreme Court order to fix their school funding formula, deemed unconstitutional by the court, on Thursday June 16, 2016 at the Kansas Statehouse in Topeka, Kan. (Chris Neal/The Topeka Capital-Journal via AP)

Topeka ? There were deep divisions Thursday among state lawmakers, and members of the public, about how best to prevent the Kansas Supreme Court from closing schools next month and whether a constitutional amendment is needed to prevent the court from making such a threat in the future.

The House and Senate judiciary committees held a joint hearing Thursday to discuss those issues in advance of next week’s special legislative session to deal with the Supreme Court’s latest school finance order.

While much of the discussion centered on one plan to restore an equalization formula that had previously been held constitutional but that lawmakers repealed last year, some lawmakers also vented their own anger at the court, arguing that the justices had gotten the decision wrong and that the Legislature and governor should simply ignore it.

And Rep. John Rubin, also an Overland Park Republican, said it’s the court’s job to strike down unconstitutional acts of the Legislature and governor, but that “the Kansas Supreme Court, and its decisions, can act unconstitutionally.”

On May 27, the court struck down a provision of this year’s school funding plan that distributes equalization aid to subsidize the local option budgets of some districts. That money — about $429 million in the upcoming academic year — is intended to make sure that school districts throughout the state can raise comparable amounts of money through comparable tax levies, regardless of the relative property wealth within the district.

The court said that disparities in the tax levies required by different districts were so wide that it made the entire local option budget portion of the school finance formula unconstitutional. And because those LOBs, with state and local money added together, total roughly $1 billion statewide, or 25 percent of all school funding, the flaw in the formula makes the entire school funding system unconstitutional.

It gave lawmakers until June 30, the last day of the fiscal year, to fix the problem, and it strongly suggested that it would not allow the state to operate schools next year under an unconstitutional funding formula.

One solution that the court has suggested, but has not required, is for lawmakers to reinstate the formula that existed before 2015 and fully fund it, a move that would cost about $38 million more than the state is spending now.

But members of the public who testified before the joint panel were divided on whether the Legislature should do that.

David Dorsey of the conservative think tank Kansas Policy Institute, suggested the Legislature should distribute money to school districts regardless of any order the court may issue and pass a law indemnifying state and school employees from contempt charges if they disobey the order.

“If any school districts choose not to open their doors … provide every student in those districts with state-directed vouchers to attend any public or private school of their choice.”

But Suzan Patton, superintendent of the Pratt school district, said she believes it’s important to everyone in Kansas that schools are funded equitably.

“Our students go to your communities,” she said. “I can’t tell you how many Pratt students are now living in Johnson County. But the fact is, they are successful taxpayers. They are successful employees in all kinds of major industries and work arenas.”

By the same token, she said, “I need to hire the best teachers. We have doctors who come into our community. Guess what the first place is they go to visit? Our school district.”

Rep. Boog Highberger, D-Lawrence, who serves on the House Judiciary Committee, said he was disappointed by the tone of the hearing.

“I’m really struck by the hostility by some of my colleagues toward the judicial system and, I think, a real misunderstanding of the function of the judicial system,” he said. “Some of my colleagues think the function of the courts should be to do what the people want. No, that’s the Legislature’s function. The court’s function is to make sure the Legislature follows its constitutional duties.”

Sen. Jeff King, R-Independence, who chairs the Senate panel, said the committees will probably issue a report after the hearings, advising the House and Senate budget committees about how to respond to the court’s ruling.

But he said the committees may also recommend constitutional amendments to limit the court’s authority to order certain kinds of remedies in school finance cases.

Kansas lawmakers enacted similar statutes during a special session in 2005, which was called in response to an earlier case in which the court also threatened to close schools if the Legislature did not comply with its order. But some have suggested those laws could easily be overturned as well as infringements on the court’s constitutional power.

Dorsey of Kansas Policy Institute said those amendments don’t go far enough, and he suggested another amendment to strike the word “suitable” from Article 6 of the state constitution, which currently says, “The legislature shall make suitable provision for finance of the educational interests of the state.”

A constitutional amendment requires passage by two-thirds majorities in both chambers of the Legislature, then a simple majority of voters in a statewide election.

King said if lawmakers approve any amendments during the special session, they would most likely be placed on the Nov. 8 general election ballot.

Video from portions of the hearings (most recent first):

Thanks for bearing with us as we attempted to live stream some of the Kansas Legislature joint judiciary committee's hearing on school finance.Read updates from Journal-World reporter Peter Hancock and the Associated Press here: ljworld.com/ksleg616