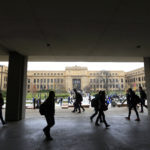 Students walk between classes at the University of Kansas on Monday, Nov. 16, 2015, in Lawrence, Kan.

Topeka ? Tuition at state universities in Kansas will go up between 4.9 percent and 6 percent next year for in-state undergraduates, under proposals approved Wednesday by the Kansas Board of Regents.

KU’s interim provost, Sara Rosen, said the tuition proposed by and approved for KU represented a balance. She added that state budget cuts are significant, however.

“We’re always concerned about the balance of both the need of the university and the need of the students,” Rosen said. “We’ll still be behind quite a bit even with this increase.”

All campuses except Wichita State University and the KU Medical Center proposed higher tuition this month than those brought before the Regents for a first-reading last month. The May tuition proposals were prepared before Gov. Sam Brownback signed the state budget and ordered additional allotment cuts to higher education that were millions more than expected.

Regent Bill Feuerborn, who made the motion to approve additional increases as proposed, said he thought universities came back with “conservative” increases from last month to this month.

“I hate it that we have to raise tuition at all,” he said. “If the state dollars are not there, then they have to come from somewhere.”

“At some point you’re serving a very small percentage of the Kansas taxpayers,” she said.

Going forward, Brandau-Murguia said she urged university CEOs to worry as much about access for all students as they have been about increasing tuition to fund faculty and staff raises and the quality of education.

Like Rosen, who attended Wednesday’s Regents meeting in the stead of KU Chancellor Bernadette Gray-Little, other university CEOs cited needs including increased compliance costs, faculty salaries and remaining competitive in their markets.

“Instead, what I’ve committed to do is to attempt to find other ways of increasing our efficiency this year to hold down costs,” he said. “It is an effort to say, ‘do we really have to do this?'”

Incoming KU freshmen, for the second year, may opt to pay a compact tuition rate instead — significantly higher, but locked in for four years. KU’s proposed compact rate for in-state undergraduates is $5,242 per semester (or $5,727 including required fees). That’s a tuition increase of $297, or 6 percent, over the 2015-16 compact rate.

Increasing Lawrence campus tuition the additional 1 percent — from the 4 percent originally proposed in May to the 5 percent approved Wednesday — is expected to bring in an additional $1.8 million for KU, universitywide, KU officials have said. Overall, the new proposed tuition and required fee increases would generate $9.1 million in additional ongoing funding for the Lawrence campus per year, and $2.1 million in additional ongoing funding for KU Medical Center, a total of $11.2 million per year.

Brownback’s May 18 action means a $7 million cut from what had previously been approved for the upcoming fiscal year for KU’s Lawrence campus, about 5.1 percent lower than what lawmakers had initially approved when they adopted a two-year budget during the 2015 legislative session. The KU Medical Center was also targeted for a $3.7 million cut, bringing the total cut for the KU system to $10.7 million.

Source: Kansas Board of Regents