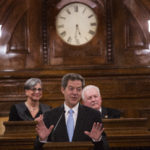 Topeka ? Gov. Sam Brownback said Tuesday that he plans to call a special session of the Legislature to address a recent Kansas Supreme Court ruling on school finance.

“I will do everything I can to keep this session focused on education,” Brownback said in a statement. “I am working to arrange the particular dates of the session, which will occur later this month.”

Last month, the Supreme Court ruled that the formula the state uses to distribute one form of aid to local school districts is unconstitutional, and it gave the Legislature until June 30 to fix the formula.

Many have interpreted that as a threat to close schools on July 1, although the court also has the option of ordering its own fix to the formula.

“After discussion with Legislative Leadership, I have decided to call a special session to keep Kansas schools open, despite the Court’s threat to close them,” Brownback said in the statement. “It is distressing that the Kansas Supreme Court has put the schools and legislature of Kansas in this position over less than 1 percent of school funding.”

On May 27, the court struck down a portion of this year’s school funding formula that distributes equalization aid to poorer school districts to subsidize their local option budgets, which is the additional money districts raise above and beyond their base state aid.

Those budgets, known as LOBs, are mainly funded through local property taxes. But the state subsidizes those budgets for less wealthy districts so they don’t have to levy higher property taxes than wealthier districts with larger bases of property valuation.

Republicans have been saying that the issue involves less than 1 percent of the state’s $4 billion education budget because it is estimated that implementing one possible fix would cost less than $40 million.

However, in its May 27 opinion, the court stated that the unequal method of distributing aid makes the entire LOB system unconstitutional. When both local tax dollars and state equalization aid are combined, that adds up to roughly $1 billion, or 25 percent of the entire education budget.

The court’s decision was released late in the day on May 27, the Friday before the Memorial Day holiday weekend. Lawmakers returned to the Statehouse the following Wednesday, June 1, for the traditional “sine die” ceremony to close out the session. But they did not take up the school finance decision, saying that too many lawmakers had not yet read the opinion and there wasn’t enough time in the one-day sine die session to deal with it.

Conservatives in the Legislature have been harshly critical of the court’s opinion, calling it an overreach of judicial authority, with some indicating they might prefer to defy the court by not calling a special session. And Demcorats, who began calling for a special session over the weekend, have been equally harsh in their statements, blaming the GOP leaders for creating an unconstitutional funding scheme in the first place.

Following Brownback’s announcement Tuesday, neither side appeared willing to tone down its remarks.

“The Kansas Supreme Court has made their desire to close Kansas schools crystal clear,” House Speaker Ray Merrick, R-Stilwell, said. “Their willingness to use Kansas children for their own political gain is despicable. Despite the court’s attempts to stir up fear, it’s not going to happen. During the upcoming special session Republicans will ensure that schools remain open while at the same time upholding the Kansas Constitution and not bowing to judicial overreach.”

“It appears that Sam Brownback is finally listening to the people of Kansas who are very concerned about keeping schools open in August,” Senate Democratic Leader Anthony Hensley, of Topeka, said. “However, it remains to be seen whether he and Republican legislative leaders want to comply with the Gannon (v. Kansas) equity order in a bipartisan way. Or, will they once again push through legislation that sets up yet another confrontation with the Kansas Supreme Court?”

Meanwhile, Rep. Tom Sloan, of Lawrence, a moderate Republican, urged the governor and speaker to put their anger toward the court aside.

“Just as the Legislature and Governor may disagree with each other, so too may Legislators and the Governor disagree with the Court’s decisions,” he wrote in a letter to Brownback and Merrick. “Yet, we must recognize that within the authority granted by the people, all of us are striving to uphold the Kansas Constitution to the best of our abilities, even when we disagree.”

Lawmakers on both sides of the aisle have suggested that the week of June 20 would be the most likely time for a special session. That would give them only 10 days to pass a bill and send it to the governor so that he could sign it and deliver it to the Supreme Court before the June 30 deadline.

But lawmakers have another incentive to work quickly, especially those who are involved in contested primary elections.

Under state law, according to Carol Williams, executive director of the Kansas Governmental Ethics Commission, incumbent lawmakers may not solicit or receive campaign contributions from registered lobbyists while the Legislature is in session.

After the sine die session last week, lawmakers could begin soliciting and receiving contributions. But Williams said they will not be able to do so during the special session.

She also said that if a lawmaker already has a fundraiser scheduled, and if the special session is going on that day, he or she may go ahead and hold the event. But any registered lobbyist attending will not be allowed to make a contribution until after the special session ends.