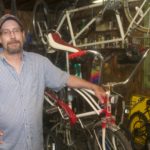 His love of older bicycles led to a home business for Mark Whaley. The garage of his Baldwin City home is filled from wall to wall and floor to ceiling with many different kinds of bicycles.

What’s outside of Mark Whaley’s Baldwin City garage hints at what fills it.

Leaning against a tree is a rusty 1950s-era bicycle of the kind that eschews straight lines for French curves of bent steel and a cast-iron gate with the word “bikes” spelled out on its top.

Stepping to the garage door, Whaley warns there won’t be much room to walk inside. And, indeed, it is filled wall to wall and floor to ceiling with all kinds of bicycles. There are folding commuter bikes, lots of fat-tire bikes, an adult chain-driven tricycle, a tandem hanging from roof rafters and a number of 1970s children’s bikes with banana seats and ape-handle bars.

It was on the original banana seat ride, the Schwinn Stingray, that Whaley first developed his long love affair for pedal power.

“I put a lot of miles on that bike,” he said. “I’d ride halfway up to Lawrence, where I wasn’t supposed to go.”

Like most teenagers, Whaley put his bike away when he got keys to something with a motor. He found his way back to his youthful passion when he stopped at a garage sale.

“I saw a neat old bike I liked,” he said. “I bought it and fixed it up. I got a lot of compliments on it. It kind of escalated from there.”

“I went to an estate sale in Grandview (Mo.),” she said. “There were hundreds of old bicycles there. I knew he liked the old bikes, so I bought eight for him.”

They all needed work, and he got further hooked on bicycle maintenance, Whaley said. He soon started scrounging for more bikes at garage and estate sales, then sold the reconditioned rides.

The hobby became a 20-hour-a-week side business as he got a reputation in Baldwin City as someone who had bikes for sale or could repair them at his neatly organized work bench. Whaley said he mostly sticks to older bikes, staying away for more complex modern road models that require a lot of specialized tools.

“If someone brings one by, I can usually find a way to fix it,” he said.

Word has spread beyond Baldwin City that he has bikes and fixes them at reasonable prices, Whaley said.

“I get calls from Topeka, Johnson County, Leavenworth and Lawrence,” he said. “It’s all word of mouth. I haven’t kept up on Craigslist.”

His growing reputation has produced another source of bicycles. Whaley said they just started showing up in his front yard overnight or at his 40-hour-a-week job in Olathe. Sometimes he repairs them to sell and other times he strips off usable parts.

Whaley hasn’t forgotten the roots of his business. For him, it’s still the enjoyment of riding and saving old bikes for another generation of riders. His favorite current ride is a 1950s-era fat-tire bike with coaster brakes and a faux gas tank mounted between double top tubes.