Students across Kansas will likely spend half as much time taking state assessments next school year. That reduction is welcome news to Lawrence school board leaders.

“Generally — from my experience in talking with teachers, parents and students — I think that you would find that they have all felt over the last many years that there’s just too much testing going on,” said board Vice President Shannon Kimball.

On Tuesday, the Kansas State Department of Education announced that it would reduce the total required material to be assessed by 60 percent next school year. 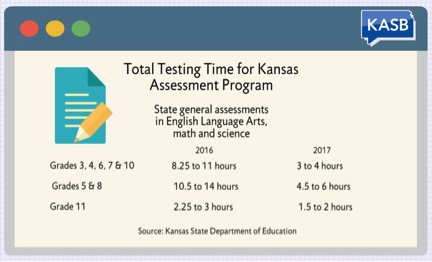 State education officials said they had lots of conversations with superintendents, principals, teachers and advocacy groups during last school year’s assessments, and decided to reconsider how assessments were given.

“They were concerned that students were spending a lot of time out of class taking tests, so we asked ourselves what would be a more efficient and useful way to go about administering the state assessments,” KSDE Assistant Director of Assessments and Accountability Beth Fultz said in a news release.

Such a significant reduction in the amount of material students are tested on is possible because of revisions made to the federal No Child Left Behind Act in December. Changes to the law — made under the Every Student Succeeds Act –gave more authority to states and local school boards, including how state assessments are administered and their results used.

State assessments are given in English, math and science to students in grades 3-8 and 10-11 over multiple class periods. The maximum amount of time students spent taking tests for the 2015-2016 school year is estimated to be 14 hours, according to KSDE. With the 60 percent reduction in material, the maximum time students spend taking tests is expected to fall to about six hours.

Because the tests have no specific time limits, the number of hours students in Lawrence spend taking state assessments will vary school by school, according to Terry McEwen, the district’s director of assessments, research and instructional resources. Though with 60 percent fewer test questions, time spent on the test by students is likely to decrease by a similar amount, McEwen said.

Kimball said she thinks that state and district staff both believe that reducing state testing will benefit teachers and students.

“We can get quality information about where our students are — what they’ve mastered and what they haven’t — with less testing,” Kimball said. “I think that’s a win-win for everybody. By reducing the amount of time our students are spending, I think that will actually improve test performance, because we have more instruction time to cover the materials and the skills that we need our students to know and to master.”

KSDE plans to provide additional information on changes to state assessments after school starts in August.