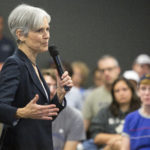 Jill Stein, the Green Party’s presumptive presidential nominee, told a crowd Saturday at the Lawrence Public Library that her call for forgiving the student debt of 43 million Americans was the formula for making the White House a “Green House.”

“The student loan crisis is the gateway issue,” she told a crowd of about 200. “There are 43 million young people and people going into middle age who are trapped in student loan debt. Forty-three million, it turns out, is a winning plurality in a three-way presidential race.

“We are calling for bailing out the young people and not so young people who are trapped in predatory student loan debt. We did it for the crooks on Wall Street. It’s time to do it for their victims.”

Stein, a former clinical physician who said she is now practicing “political medicine,” was a two-time Green Party candidate for governor of Massachusetts and the party’s 2012 presidential candidate, finishing that race with 0.36 percent of the vote.

To improve her chances in the November, Stein is looking to get on the ballot in as many as 47 states. Her visit to Lawrence coincided with a petition drive to collect the 5,000 signatures in the next three weeks needed to get her on the Kansas general election ballot in November.

Her second national campaign is noticeably different, Stein told the library crowd. In addition to more responsive crowds, there’s more media coverage with reporters asking her about what voters’ disenchantment with the presumptive nominees of both major parties, Democrat Hillary Clinton and Republican Donald Trump, means for her campaign.

“I have to pinch myself that this could happen,” Stein said. “Stranger things have happened in this campaign year.”

Stein took several swipes at the concern her candidacy would split left-leaning voters and hand the presidency to Trump. She characterized the “lesser evil” appeal to vote for Clinton as the politics of fear that overlooked the fact Democrats haven’t acted on the key issues.

“The politics of fear, it turns out, have actually delivered everything we are afraid of,” she said, citing the loss of jobs to foreign countries, the 2009 Wall Street bailout, climate change and wars in Afghanistan, Iraq and Libya. “We got all that on steroids, whether it was Democrats or Republicans.”

Stein presented her ideas for addressing those issues, starting with a call for a “peace initiative” of cutting by half the county’s military spending, which consumes 57 percent of the budget. The initiative would end wars for oil, which she said created more terrorism and refugees.

Domestically, Stein called for a “Green New Deal” to be paid for through savings in military spending. Among its components would be the creation of 20 million new “living-wage” jobs by investing in sustainable energy and public transportation to address climate change and environmental degradation. That investment would transition the country to 100 percent clean, renewable energy by 2030, Stein said. Other elements of the plan would be universal health care, free college education and the forgiveness of student debt.

Dave Crawford, of Lawrence, was one of many in attendance wearing a T-shirt from Bernie Sanders’ campaign for the Democratic nomination for president. As he left the library, he said Stein was “a breath of fresh air.”?”She goes further even than Bernie,” he said. “I think being outside the Democratic Party, she can say things that push even further.”