President Barack Obama’s nomination of a Lawrence attorney to serve on the federal bench got a warm reception in Kansas, including the crucial support of his home state senator.

The president announced his choice of Terrence J. Campbell for the U.S. District Court in Kansas on Thursday. He would succeed U.S. District Judge Kathryn Vratil, who in 2014 took senior status, a form of semi-retirement. Campbell must still be approved by the Senate Judiciary Committee and confirmed by the full Senate.

U.S. Sen. Jerry Moran, a Republican, in an email Friday said he looks forward to supporting his Senate confirmation.

“Providing advice and consent for Presidential nominees is one of the most important roles of the United States Senate and a responsibility I take very seriously,” Moran said. “Mr. Campbell is a respected lawyer with high qualifications that make him a strong nominee to fill the vacant federal judgeship in the District of Kansas.” 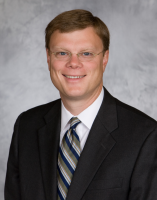 The state’s other Republican senator, Pat Roberts, also praised the nominee but stopped short of a commitment. Roberts said in an email that the Senate Judiciary Committee will begin to examine Campbell’s credentials, the first step in a thorough vetting process.

“Terry Campbell enjoys a good reputation in both the Kansas legal community and the community of Lawrence where he has raised his family,” Roberts said.

Campbell, who began his legal career as a law clerk to U.S. District Judge John Lungstrum from 1997 to 1999, practices civil and criminal litigation at the law firm of Barber Emerson, L.C., a Lawrence firm he joined in 1999. His resume also includes part-time stints as a traffic judge pro tem for the District Court of Douglas County from 2005 to 2008 and as an adjunct professor in 2001 teaching contracts at the University of Kansas School of Law.

In a phone interview Friday, Lungstrum cited Campbell’s years of experience handling a mix of cases in his law practice which he said when combined with “his intelligence and hard work ethic” would make him someone who would be able to hit the deck running on day one and be an excellent judge.

“I don’t see it as being controversial at all,” Lungstrum said of the nomination. “The only question is whether the schedule that is in place in the Senate will allow for him to make it through. I feel quite certain, based on anything I know about Terry, that there is nothing likely to come up that would cause somebody pause.”

Contacted by the Journal-World on Friday afternoon, Campbell’s office, Barber Emerson, L.C., said he did not wish to comment on his nomination.