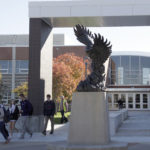 A Free State High School student who was displaying a Confederate flag on the vehicle he drove to school has been told he can no longer display the flag on school property.

Lawrence Superintendent Rick Doll said that the administration at the school considered the student’s free speech rights before making the decision.

“School staff see this issue as an educational opportunity for students and fully understand the school’s obligation to respect students’ free speech rights and protect students from racial discrimination and harassment, as the Confederate flag may be associated with racism, slavery and violence against African-Americans,” Doll said via email.

“Discrimination is conduct which affords a student different treatment, solely on the basis of race, color, national origin, religion, disability, sex, sexual orientation or gender identity in a manner which interferes with or limits the ability of the student to participate in or benefit from the services, activities or programs of the school.”

A spokeswoman for the district said that the decision not to allow the student to bring the flag to school was based on the effect it was having on the environment.

“It was disrupting the learning environment, so Free State High administration asked the student not to bring the flag back on campus,” district spokeswoman Julie Boyle said via email.

Free State’s policy states that any student who engages in discriminatory conduct shall be subject to disciplinary action, up to and including expulsion from school. Boyle said that apart from being told not to bring the flag to campus, the student was not disciplined. Further details about the incident could not be shared under the Family Educational Rights and Privacy Act, which protects the privacy of student education records.

Doll said that the incident would be used to discuss issues surrounding race with students at the school.