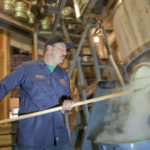 Geoff Deman, head brewer at Free State Brewery, pulls out spent malt from the lauter tun in this file photo from 2014.

Topeka ? A Kansas House committee voted Wednesday to advance two bills that would increase the production limits on microbreweries and allow them to manufacture hard cider.

That action sends the bills to the full House for consideration. But a Senate committee that is considering identical bills has reportedly decided to take more time to work on the exact language.

House Bill 2469 would double the current production limit, allowing them to produce up to 60,000 barrels of beer per year. And House Bill 2467 would, starting in 2017, allow them to produce “hard cider,” defined as a carbonated beverage made from fermented apples or pears, with no more than 8.5 percent alcohol content.

Currently under Kansas law, microbreweries like Free State Brewing Co. in Lawrence are only allowed to produce up to 30,000 barrels per year. Beyond that, they are considered a beer manufacturer, which not only puts them in a different tax category but also means they cannot operate their own “brew pubs” where they sell their own products.

But during hearings on the bill last week, officials from the Department of Alcoholic Beverage Control noted that the 30,000-barrel limit applies to each license, not to the “brand” or group of owners. Therefore, a single company could open a number of establishments with each one producing up to the maximum amount allowed.

The bill was introduced on behalf of Manhattan-based Tallgrass Brewery, whose owners have said they will likely reach the 30,000-barrel limit by the middle of next year.

In the House Federal and State Affairs Committee, Rep. Pete DeGraaf, R-Mulvane, offered a motion to table the bill for a week in order to work on that language. He noted that under federal law, a company that produces more than 60,000 barrels per year is considered a manufacturer and subject to the federal manufacturer’s tax.

He said that by allowing a microbrewery to produce up to 60,000 barrels at multiple locations, Kansas might effectively be giving microbreweries an unfair advantage over large manufacturers.

Philip Bradley, a lobbyist for the Craft Brewers Guild of Kansas, told the committee that’s not likely to happen because of the large capital investment it takes to buy the equipment needed to set up a second facility. Most microbrewers, including Tallgrass, would prefer to simply raise the production limit on their existing facilities.

The majority of the committee, however, voted to move forward with the bill in its present form. But the Senate committee that is considering an identical bill did not.

Sen. Ralph Ostmeyer, R-Grinnell, who chairs the Senate committee hearing the bills, said his panel will not take action until it can work out compromise language to satisfy both the microbreweries and the beer manufacturers.