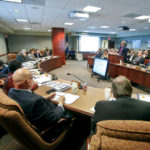 The Kansas Board of Regents listens as Kansas University's Tom Beisecker discusses the results of a faculty and staff gun survey on Wednesday January 20, 2016, in Topeka, Kan. Beisecker told the regents that the current legislation would have a chilling affect on tough campus discussions. The board is acting because a state law will prevent universities from barring concealed weapons starting in July 2017. (Chris Neal/The Topeka Capital-Journal via AP)

TOPEKA — The Kansas Board of Regents updated its weapons policy Wednesday to comply with a state law requiring universities to allow concealed carry of guns on their campuses starting July 2017.

Now, it’s up to each of the six state universities to develop policies outlining how the controversial law will be implemented on their specific campuses.

Board of Regents chairman Shane Bangerter said the state law doesn’t leave a lot of leeway when it comes to implementation — it’s very clear that lawful concealed carry must be allowed.

Statistics indicate that only a small percentage of the population carries concealed guns, Bangerter said, so he doesn’t think universities will actually see much of a difference after July 2017.

“This law isn’t going to change anything a whole lot one way or the other,” he said. “How much time and energy do you want to spend on it, and how much money?”

Each university will have to weigh that for itself, he said.

Bangerter said the Regents policy aims to provide “common sense” guidance for implementing the Personal and Family Protection Act on college campuses, which have had an exemption since 2013 that will expire in 2017. The policy requires each university to:

• Create policies and procedures for the “safe possession and storage of lawfully possessed handguns.” Those must include directions for reporting policy violations, how the university will educate students and employees about the policy, and where to find firearm safety instruction.

• Determine whether guns will be prohibited in specific buildings or areas and, if so, provide adequate security measures and signage at entrances. Universities must provide the Regents Governance Committee with a list of these buildings, the rationale for banning guns from them and the security measures in place. Security measures also may be implemented on a “temporary, as-needed basis.”

• Ensure that, if security measures are used to prohibit guns in stadiums or other large venues requiring tickets for admission, tickets state that concealed carry will be prohibited at the event.

The Regents policy also addresses guns at the individual level.

“Each individual who lawfully possesses a concealed handgun on campus shall at all times have that handgun in their custody and control, and shall either keep it on their person with safety mechanism, if any, engaged, or stored,” the policy states.

Anytime a handgun is not on the individual’s person, it must be locked in a secure storage area provided by the university, stored in his or her residence, or locked in a vehicle and concealed from view, according to the policy. If the gun carrier lives in a dorm or scholarship hall where guns are allowed, he or she must lock the gun, concealed from view, in a device that meets “minimum industry standards for safe-keeping of handguns,” the policy says.

Weapons in general — such as switchblades, explosives or crossbows — will continue to be prohibited on state university campuses, as will open carry of any firearms, according to the Regents policy.

Earlier in the meeting, the Regents saw results of a Council of Faculty Senate Presidents survey that indicated 77 percent of university employees statewide don’t want guns on campus.

“It becomes apparent from the results of this survey that this is really not a Second Amendment issue; this is an issue of campus safety,” said Tom Beisecker, associate professor of communications studies at KU, speaking on behalf of the council.

While he acknowledged the Board of Regents did not enact the law, Beisecker said the board has a duty to ensure a free learning environment and that allowing the law to remain in place would create a “chilling effect” on university campuses statewide.

“The implementation will restrict faculty members’ and students’ sense of academic freedom,” he said. “It will diminish their willingness to engage in robust controversial debates.”

Regent Zoe Newton requested information about universities in states where campus carry already has been enacted.

“Until we’ve actually been through it, we don’t have anything but what people think,” she said. “It may give us some information, and maybe even some comfort.”

She said those states’ policies and laws were reviewed prior to drafting the Regents policy.

Next steps for KU

Bangerter said the board wants to have universities’ policies ready for its review by October.

At KU, the next step for administration is to gather a group of university attorneys, campus police and other relevant stakeholders to begin developing a policy, chancellor Bernadette Gray-Little said.

While some groups on the KU campus have pledged to lobby the Legislature to change the law — and Gray-Little herself has stated she personally opposes allowing guns on campus — she said that’s not the plan for university administration.

She said KU leaders must now respond to the Regents’ directive.

“I think there will continue to be efforts on the campus to look for ways to work with the Legislature over time,” Gray-Little said. “I think for the administration, what our role is at this time is to see what are the best things we can do to keep our campus safe, and comply with the law.”

Jan. 14, 2016:Heard on the Hill — Kansas university employee gun survey results are in; KU generally more anti-gun than other schools

Dec. 17, 2016:Heard on the Hill — Preliminary results are in from statewide student gun survey