Report: Kansas residents buy groceries out of state due to food tax 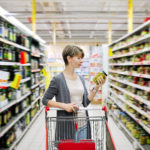 Wichita — Kansas’ high sales taxes on groceries have people crossing state lines to shop, particularly residents living in border counties, and the trend is hurting not only low-income families, but also rural grocery stores and local governments, according to a new study.

Kansas lost $345.6 million in food sales in 2013 — costing the state $21.2 million in lost sales tax revenue, according to a recent report by Wichita State University’s Kansas Public Finance Center. The center analyzed the latest available food sales data, which does not include last year’s food tax hike to 6.5 percent, among the highest in the nation even before local sales taxes are added in. Kansas is one of only 14 states that tax food.

In northwest Kansas, 73-year-old Larry Adams and his wife struggle to make ends meet on the $800 monthly Social Security check he receives. The Logan couple has been doing most of their grocery shopping and non-food item shopping in neighboring Nebraska for about 10 years when they cross the border for doctor’s appointments.

Nebraska doesn’t have a grocery tax, he said. “It doesn’t cost us anything extra to go out of state,” Adams said of driving the 80 to 100 miles.

Of the state’s 105 counties, 35 counties share at least one border with a neighboring state that has either no or lower food sales tax than Kansas, the study noted. Colorado exempts grocery store food sales from taxes, Missouri has a 1.2 percent tax on food sales and Oklahoma has a 4.5 percent tax.

The WSU study was commissioned by KC Healthy Kids, a nonpartisan, nonprofit that has been advocating for healthy living for 10 years. The study found that for every 1 percent difference in sales taxes between adjacent states or counties, food consumption drops about $101.80 per person per year in the county with the higher food sales tax.

KC Healthy Kids was looking for ways to make compelling arguments to the Legislature this session on why it should eliminate or reduce the sales tax on food, state policy manager Ashley Jones-Wisner said, and the first was equity, because sales taxes on groceries have a disproportionate impact on low-income families and their access to food. But the organization realized it needed hard numbers on the economic impact such taxes have on the state.

“We could talk until we were blue in the face as advocates, but it’s nice to have some data — some substantial data from a neutral third party — to kind of substantiate that,” she said.

The state’s largest county, Johnson County, suffered the biggest losses with an estimated $93 million loss in food sales in 2013, the report said.

But food sale losses on a per-capita basis hit less populated border counties the hardest — especially Greeley, Pottawatomie and Comanche counties, where grocery stores are already struggling to survive amid dwindling populations. When people crossed borders to shop, it hurt the local economy, as well as county and municipal governments who impose their own sales taxes on food and other items.

“We are putting a tax on something which disproportionately affects low-income households, and it appears to cause people to move across borders to do shopping, which basically produces a revenue loss,” said Ken Kriz, the center’s director. “So the question is, thinking going forward, what are the goals we are trying to achieve by keeping this in place?”