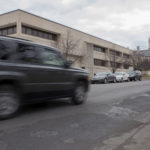 Hanging from a visor inside the car of Lawrence’s Assistant Public Works Director is a notepad, which he keeps to jot down the location of potholes he spots while driving around the city.

Mark Thiel said he pulls over, writes the note, and then sticks it in the city mailbox of Mike Perkins, the street division manager.

The number of notes, and potholes — and general street deterioration — is on an upturn, according to city analysis. And Thiel is drawing a parallel to that and a decrease in funding for Lawrence’s pavement maintenance program.

“We have started to see since 2014 a parallel between the deterioration rate and the funding,” Thiel told City Commissioners last week. “I think it’s key to recognize those two numbers are tied very close together.”

The Lawrence City Commission has approved a set of pavement improvement projects for 2016 costing $2.8 million, but that amount is only a portion of what the pavement maintenance program received in its outset. The “dwindling” dollars mean the city isn’t staying ahead on its maintenance projects, Thiel said, creating a growing backlog of streets that need to be improved before they’re so bad that preventative maintenance is no longer cost-effective.

The city’s pavement maintenance program, created in 2005, is intended to slow street deterioration. It includes work on streets still sound enough for preventative maintenance — everything from pothole repair to filling cracks on mildly damaged streets, to replacing pavement, curbs and gutters on previously neglected roadways.

The program was designed to receive $6 million annually in order to be sustainable and avoid a backlog of projects, but the amount budgeted has been dropping yearly since 2012, according to city reports.

“We are quite a bit behind related to street maintenance where we should be perhaps funding it,” Interim City Manager Diane Stoddard said during a presentation about the program Feb. 23.

The city tracks the quality of its streets with the Pavement Condition Index, which rates streets from 0 (worst) to 100 (brand-new).

Though the lane miles of streets classified as “fair to poor” has gone down since the program’s inception from 31.5 percent of Lawrence’s streets in 2005 to 17.5 percent currently, the downward trend has “begun to level out,” Thiel said.

Lower funding in 2015 and this year has pushed $6.6 million worth of deferred projects onto a backlog.

“When I explain this program to a new engineer, I talk about it as a pyramid or a three-legged stool,” Thiel said. “What I mean by that is the program is basically supported by its funding source, its ability to be successful and the people. So, if you lose any one of those three legs of that stool, you get a little bit of weakness. If you look from 2005 to today, especially at the deterioration rate and the funding line, you can see deterioration has increased… which means we’re losing ground.”

Adding stress onto the program is the increasing number of lane miles in Lawrence — up from 802 in 2005 to 852 now — and the cost of including pedestrian and bicycle and traffic-calming additions to routine street projects.

The cost of those improvements, coupled with a shortfall in funding, “is stunting overall progress levels” leading to fewer maintained streets, the memo reads.

Thiel also spoke to city commissioners about the need for a program solely focused on curb replacement.

Of Lawrence’s 3.17 million linear feet of curb and gutter, approximately 260,000 are classified as in poor condition. The estimated cost to replace the curbs classified as poor is $10.4 million.

In his presentation Feb. 23, Thiel showed commissioners five photos of cracked streets that were deferred from maintenance in 2016 because of the funding shortfall.

“Some of these comments sound kind of negative,” Thiel concluded. “But it’s fair to the program, I think — a program I value as being successful — that you all are aware of some of the things we’re seeing out there.”

Mayor Mike Amyx asked that commissioners receive another report on the program when they’re determining the 2017 budget.

“… Just to remind us, especially of the deferred maintenance projects,” Amyx said. “That list will continue to grow, so I think we need to be aware of that.”

• Harvard Road from Wellington Road to west of Iowa Street: microsurfacing and patching