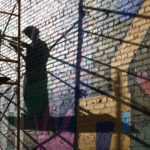 Lawrence artist Dave Loewenstein works on a mural in Joplin, Mo., in this image from Called

In Joplin, Mo., there is a mural stretching about 60 feet across the side of an old brick building near the intersection of 15th and Main streets.

Its imagery is colorful and childlike. Representations of historical Joplin transition to butterflies, flowers and kids at play interspersed with less cheerful images — barren trees, destroyed buildings, ominous clouds — before giving way to a phoenix triumphantly soaring toward the sun.

Near the mural’s upper right corner reads a quote from Langston Hughes: “And trees put forth new leaves to sing in joy beneath the sky.”

Dedicated in September 2011 — just four months after an EF-5 tornado ripped through Joplin, destroying one-third of the town and claiming the lives of more than 150 people — the mural has since become a symbol of hope and rebirth to the community.

But when Lawrence artists Dave Loewenstein, Nicholas Ward and Amber Hansen traveled to Joplin just a month after the tornado to begin work on the project, there was uncertainty.

Not from the residents, Hansen remembers, but from the artists themselves. As outsiders, they thought, is it really our place, or the time, to enlist the community in this effort? When talk around town still focused on rebuilding lost homes, when the mural site was only a few blocks away from some of the storm’s worst destruction?

“The significance of painting on that wall was intensified, and partly because it was shortly after the tornado,” says Hansen, who, along with fellow mural assistant and fiancé Nicholas Ward, chronicled the experience in their first feature-length documentary, “Called to Walls.”

Joplin’s is one of four community mural projects (among them Tonkawa, Okla.; Newton, Kan.; and Arkadelphia, Ark.) featured in the film, which makes its Lawrence premiere Saturday at Liberty Hall. The filmmakers, Loewenstein, Tonkawa project coordinator Audrey Schmitz, Rocket Grants program coordinator Julia Cole and writer/activist Arlene Goldbard will take part in a panel discussion after the screening, followed by an after-party at Decade coffee shop with live music from No Magic and Invisible Public Library.

What: Lawrence premiere of “Called to Walls”

Cost: Tickets are $5 and can be purchased online through Ticketmaster or at the Liberty Hall box office.

Funded partially by the Mid-America Arts Alliance, with a little help from Kickstarter and the filmmakers’ own wallets, “Called to Walls” documents a particular brand of art far removed from slick urban spaces, hip galleries and prestigious museums.

“At a very basic level, what all these projects have in common is they’re being (presented) with a question of, ‘How do you feel, imagine, see the narrative of the place you live, and what does it look like?’ Let’s start from there,” says Ward. “That’s a really amazing way to start dialogue in a group of people, and it’s a question that isn’t asked very often.”

On the first day of painting in Joplin, led by Loewenstein, somewhere around 100 volunteers showed up to help. Support remained strong, even on the last day.

“It was really important to them to add their mark to the wall,” Hansen says. “That was transformative for me to see.”

In the spring of 2010, Hansen and Ward were just a few weeks shy of wrapping up their graduate studies in painting at Kansas University when Loewenstein asked, over coffee, if they’d like to join him on a series of murals for the Mid-America Arts Alliance.

The project aimed to document the history of six Heartland towns and spark an ongoing conversation about the influence of art in a community. Hansen and Ward, both products of small towns, wanted in.

(They have their degrees, but skipped out on the commencement ceremony.)

So, in a matter of two weeks, they were with Loewenstein in tiny Tonkawa, Okla., living in a bed-and-breakfast located above the town’s funeral home. It was called Rest in Peace.

The idea, Ward says, was to embed themselves in the community. They’d spend about three months in each town before completing the mural and moving on to the next, so why not get to know the place?

“We were having dinner with people every night, becoming really engaged, and spending so much time hearing people’s stories that it just became this really familial experience and a really rich (version) of what art could be,” Ward recalls. “When I would call home and try to explain to them the experience we were having, it wouldn’t register to them. To communicate that narrative, it seemed film was the best approach.”

The movie was “playful” in tone at first. But the stories that presented themselves in communities like Tonkawa, where the filmmakers discovered a “disconnect” between townsfolk and the neighboring Tonkawa tribal reservation, gave the project scope and ambition.

Part of the goal of the Tonkawa project (as well as the others) was to promote inclusivity, in both the design teams and the murals themselves. Loewenstein and his assistants traveled to youth programs, schools, tribal offices and, in the case of the Arkadelphia mural, a nonprofit that provides services to adults living with developmental disabilities.

Anyone — young or old, rich or poor, artistically inclined or otherwise — was encouraged to share his or her story and contribute to the design process. In many cases, such as in Tonkawa, the murals forged “unlikely” partnerships between groups that may not have interacted much before.

“These projects make no false claim of solving political problems,” Ward says, but “I think a big component of our role was to ask questions and listen and see if we could stir up conversations that weren’t already happening.”

In Tonkawa, the finished mural includes an image of a Native American leader pointing out his tribe’s diminished territory on a map of Oklahoma — the likeness is taken directly from a scene in “Called to Walls” with Tonkawa tribal president Don Patterson. In Arkadelphia, representations of the city’s rich African-American history are focal points. Newton’s mural, too, reflects the town’s railroading industry and Hispanic population.

And in Joplin, particularly, young people played a substantial role. Loewenstein reportedly enlisted more than 200 area children to share, in drawings, their dreams of Joplin. The tornado and its chaos was a recurring theme that the artist — and community volunteers — couldn’t ignore, even despite pressure from the city manager’s office.

The resulting mural was dedicated in a ceremony attended by more than 100 Joplin residents, artists and city officials. A children’s choir from a local church sang Bob Marley’s “Three Little Birds” to commemorate the occasion.

“Many people talked about their experience having to cross the city looking at the bleak landscape, and how it (the mural) gave them this new hopeful thing to look at traveling through that landscape,” Hansen says.

Last fall, when “Called to Walls” was in its last stages of postproduction (there’s still a bit of tweaking to be done while the filmmakers wait to hear back from film festival selection committees), Ward and Hansen returned to many of the mural communities.

They wanted to screen the film for the people with whom they’d forged these lasting relationships, and they hoped the film would resonate. “It felt like a homecoming,” says Hansen, who plans, at the invitation of community members, to screen the movie again in Joplin this May, for the fifth anniversary of the tornado.

Adds Ward, “I think the project as a whole is a remarkable experience that requires a lot of circumstances to come together: funding, the understanding that engaging in arts this way is valuable to people and communities, and that we have to be able to trust or give value to these things, even though there’s not necessarily a way to gauge the worth or tangible outcome, aside from that mural.”

Ultimately, he wonders, “How do you give worth to the experience of that when what you have in the end is a picture on the wall?”