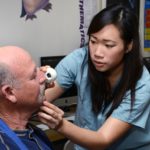 Baldwin City ? A Baldwin City Masonic Lodge, in collaboration with 21 other lodges across the state, helped break records for the number of free cancer screenings given across Kansas.

According to the Midwest Cancer Alliance, the outreach network of the Kansas University Cancer Center, nearly 2,000 people statewide were screened for their risk of skin and prostate cancer through Masonic Lodge screenings. Previously, Lodges had screened about 400 Kansans each year.

He said the lodge was very pleased with the results.

“Two personal friends of mine were screened for skin cancer and referred to their personal physicians, and then they had cancerous or precancerous skin lesions removed, based on the recommendations and then their consultations with their physicians,” Stoops said.

Stoops noted that without these skin cancer screenings, he’s not sure his friends would ever have known to visit their doctors.

“I think it’s something that people don’t take enough time to consider,” he said.

Stoops is also a trustee of the Kansas Masonic Foundation, which he said has invested more than $25 million in KU cancer research and the MCA. He said Masons value charity, and he thinks this is a good way to support charity in the community.

“It’s something a lot of people don’t think about, and as Masons it’s our duty to provide to our communities as best we can,” Stoops said. “This is something we found is not available in a lot of the rural communities, so through the Masonic Foundation and KU, we’re able to provide that service.”

He said Palmyra Lodge No. 23 applied to have the screenings held in Baldwin City, and although the lodge plans to apply again next year, screenings are rotated so they may be given to a Lawrence or Gardner lodge instead.

According to the American Cancer Society, skin cancer is the most common of all cancers, with about 3.5 million diagnoses in the U.S. each year.

Who should get screened for skin cancer?

• Family history. If your family has a history of skin cancer or melanomas, Groneman said, you should start getting screened earlier.

• Sun exposure and sunburn history. The more sun exposure and damage your skin has suffered, the higher your risk of developing skin cancer. According to the Mayo Clinic, having had one or more blistering sunburns as a child or teenager also increases the risk.

• Fair skin. Although anyone can get skin cancer, having less melanin — or pigment — in your skin means you have less protection from UV radiation, according to the Mayo Clinic.

How often should people get screened?

Groneman said people should get yearly skin cancer screenings “to have kind of a record of any changes, anything that’s changing on their skin.”

What should I expect at a screening?

A dermatologist will examine your skin for anything that looks abnormal or is changing in size, shape or color, Groneman said.

From the initial screening, the dermatologist will recommend ther next step: either visiting your primary care physician to follow up, or just getting screened again next year.