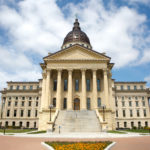 Topeka ? A House committee advanced a bill Monday that would expand a program that offers tax credits in exchange for contributions to scholarship funds that help lower-income students attend private or parochial schools.

The program, which critics have called an indirect form of state-funded vouchers for private schools, is currently available only to students who qualify for free school meals and who attend low-performing schools in low-income neighborhoods, known as Title I “priority” and “focus” schools

Lawmakers established the program last year. It currently offers a 70 percent nonrefundable tax credit to corporations that contribute to scholarship funds that enable those children to transfer to a participating private or parochial school.

In the first year of the program, lawmakers capped the total volume of tax credits available at $10 million. But according to Department of Revenue officials, the total amount of scholarship contributions was $776,000.

House Bill 2457 would expand the program by raising the income threshold to 185 percent of the federal poverty level — the income limit to qualify for reduced-price meals — and making it available to students from any pubic school, not just Title I priority and focus schools.

It would also make the tax credits available to individuals as well as corporations, raising the credit amount to 90 percent of the contribution amount.

Department of Revenue officials explained that a tax credit is more generous than a tax deduction because it is subtracted directly off the tax bill that is owed, rather than off the income upon which taxes apply.

Rep. Kasha Kelley, R-Arkansas City, who pushed for the bill, said the intent is to help students who otherwise would be consigned to the state’s lowest-performing schools.

“We hear a lot that kids’ families do have choices, and that is true if your pocketbook allows for those choices,” Kelley said. “But this particular group of children right here are in that group whose choices are muted by the fact that their pocketbook doesn’t equal the weight that others would.”

But Rep. Sue Boldra, R-Hays, argued that the program effectively shifts state resources to schools that, in some cases, do not hire licensed teachers, do not have to meet state accreditation requirements, and do not administer state assessments in order to measure student progress.

“None of the money went to Montessori schools or early childhood schools,” Boldra said, referring to a report about which private schools received scholarship funds in the first year. “All of the money on these sheets went to religious schools, parochial schools. I don’t have a problem with parochial schools, but there’s no accountability that goes with this.”

Boldra offered an amendment, which was defeated, that would have steered the money back to public schools by allowing the scholarship money to be used to pay transportation and out-of-district fees for students who want to transfer from one public school to a different one.

The bill now goes to the full House for consideration.