A slice of Hollywood in Lawrence: Through a Glass Productions creates movie magic in Sunflower State 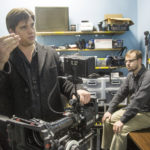 From left, Jeremy Osbern and Chris Blunk, founders of Through a Glass Productions, located at 720 E. Ninth St., talk about some of the camera equipment used in their business.

The air inside the storage room feels stagnant and warm.

Its high walls are lined with shelves of cameras and their various accoutrements, leaving little space for the three men — one cinematographer, one producer and one enthused Journal-World photographer in his own version of heaven — squeezed inside.

“He’s a lens connoisseur,” explains Marcus Guider, referring to Jeremy Osbern, the aforementioned cinematographer and co-founder of Through a Glass Productions, where we lay our scene. “He has quite a bit of them.”

Just how many constitutes “quite a bit” escapes Osbern, who pauses for a moment, straining to lift a metal case containing at least a half a dozen lenses onto a nearby tabletop, before answering: “Too many and not enough.”

The room is small (a closet really, measuring no more than 7 feet in any direction) but it’s just a room — one room of several in a 3,000-square-foot office in Lawrence’s Warehouse Arts District bearing the name of a production company launched not even 12 years ago by a pair of young filmmakers fresh out of college.

In the summer of 2004, Osbern and Chris Blunk founded Through a Glass Productions. They had just graduated that spring and wanted to produce a feature-length film. It was their first.

Initially, Through a Glass operated out of Osbern’s apartment in the 700 block of Massachusetts Street, nonfunctioning air conditioning and all. The venture later moved to an office above the now-shuttered Buffalo Bob’s Smokehouse at 719 Massachusetts St. It was a 200-square foot, windowless space that “smelled like barbecue all the time” and lacked an elevator to transport equipment, but “it was good for the time,” Blunk recalls.

The friends spent four years on “Air: The Musical,” shooting during the weekends in between commercial jobs and securing investors scene by scene, all with a budget hovering somewhere between $100,000 and $200,000.

“We started shooting the feature in December, before we could realize how bad of an idea it was,” jokes Blunk, who penned the musical tale of misfits looking for human connection.

“At that point, HD technology or digital technology wasn’t what it is now,” he says. “So we shot the film on 35-millimeter film, which was a huge expense because you have to buy the film stock and get the film stock processed and transferred.”

Since its release in 2008, “Air: The Musical” has been distributed over four continents, in places as far flung as South Africa and Turkey. It’s still available here in Lawrence at Liberty Hall — “We were smart enough to start with an ‘A,’ so it’s right in front of the local section,” Blunk notes.

Over the years, Through a Glass has expanded in size and ambition. Recent projects include “There Will Be No Stay,” a documentary chronicling the lives of executioners that’s currently being promoted by Susan Sarandon, and Kevin Willmott’s 2014 film “Jayhawkers,” about basketball legend Wilt Chamberlain’s time at Kansas University.

Aside from the occasional commercial, the company mainly deals in documentary and narrative films, handling pre-production, production and post-production “all under one roof.”

“We’ve found a niche being one of the new companies in the area that primarily focuses on movies,” says Osbern, who recently served on the jury, with wife and fellow filmmaker Misti Boland, for last month’s Slamdance Film Festival in Park City, Utah.

The current offices at 720 E. Ninth St., which the company acquired three years ago, boast seven full-time employees in addition to a part-time assistant editor and an intern, plus the 50-to-100 people Through a Glass hires for any given project.

The team is young. Osbern and Blunk, both in their early 30s, along with editor Stephen Deaver, are the self-described “old men of the group.” Marcus Guider, the company’s camera operator/camera assistant is just 25, having been referred to Through a Glass by his former professor Kevin Willmott a few months after dropping out of school in 2012.

“As far as camera work goes, Jeremy has 10 more years of experience,” Guider says. “I’ve been fortunate to train under him and, at this point, I’m building my portfolio to show what I’m capable of.”

Back in the company’s storage room, Osbern and Blunk are discussing the ever-evolving technology of the film industry. A lot has changed since they were Guider’s age.

“This one’s panamorphic. I’ve been shooting more and more with these,” Osbern says, showing off one of his prized lenses. “There are still a lot of things shot on digital that look like digital, but you take an old panamorphic lens and it gives a really great cinematic quality that you can’t get otherwise.”

New cameras come out every year, Osbern explains, but filmmakers, like the crew at Through a Glass, can still use lenses to “craft images in different ways.”

Osbern likens them to the film stock he and Blunk spent “hours on end” splicing together at Oldfather Studios during their college days. They may have been some of the last students in the Kansas University film department to work with actual film, the two now recall.

In 2004, the year they graduated and founded their company, “everyone told us to do anything in film we had to go to New York or L.A.,” Osbern recalls.

But they stayed because they wanted to help build the film scene in Lawrence, which seems to grow “every year,” especially in recent years with the success of the Free State Festival and projects such as “Jayhawkers” and Blake Robbins’ “The Sublime and Beautiful” using the Lawrence area as filming locations.

Roughly a decade after Through a Glass’s launch, tax incentives have started to attract filmmakers to places far less expensive than Hollywood — places like Michigan and New Mexico and Louisiana.

And hopefully, right here in the Sunflower State. Today, Through a Glass films somewhere around 70 percent of its projects in the Lawrence area.