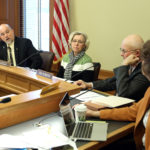 Topeka ? Kansas would decrease penalties for first and second-time marijuana possession under a bill overwhelmingly approved Wednesday by the state Senate, though pot users still could face stiff fines and time in a county jail.

The Senate approved the measure, 38-1. It’s a narrow version of legislation approved by the House last year to liberalize marijuana laws, and the measure will go there next for further review.

The vote reflected strong, bipartisan support for keeping people convicted of marijuana possession out of state prisons, so their beds can be used for violent criminals. The Kansas Department of Corrections had more than 9,700 inmates in its custody as of Tuesday, or about 100 more than the state capacity of its prisons.

“It’s a reform bill,” said Sen. Greg Smith, an Overland Park Republican, chairman of the chamber’s Corrections and Juvenile Justice Committee. “We’re taking people that have committed nonviolent crimes and not putting them in prison.”

The measure would reduce the punishment for first-time misdemeanor possession to six months in jail and a $1,000 fine, rather than the current year in jail and $2,500 fine. A second possession conviction would result in a year in jail but would no longer be a felony, so an offender wouldn’t be sent to state prison.

Amid earlier legislative discussions about marijuana penalties, Wichita voters last year approved an ordinance reducing penalties within the city for possessing small amounts of marijuana, only to see Kansas Supreme Court invalidate it last week over a technical issue.

The only vote against the Senate bill came from Democratic Sen. David Haley, of Kansas City, who proposed imposing only a $50 fine for first, second, and third-time possession of small amounts of marijuana. Senators voted 31-5 against his proposed amendment to the bill.

Haley said he believes his proposal mirrors public opinion about how marijuana possession should be punished than the Senate bill.

“I call it a common sense approach,” he said.

Smith said opposition to Haley’s proposal was so strong because the Corrections and Juvenile Justice Committee hadn’t reviewed it first.

But the committee has shown some caution about liberalizing marijuana laws.

It stripped from the bill a House-passed proposal to legalize the use of therapeutic hemp oil to treat severe seizures, so that the idea could be studied further by another panel. The action came after emotional testimony from parents with children who regularly suffer severe seizures.