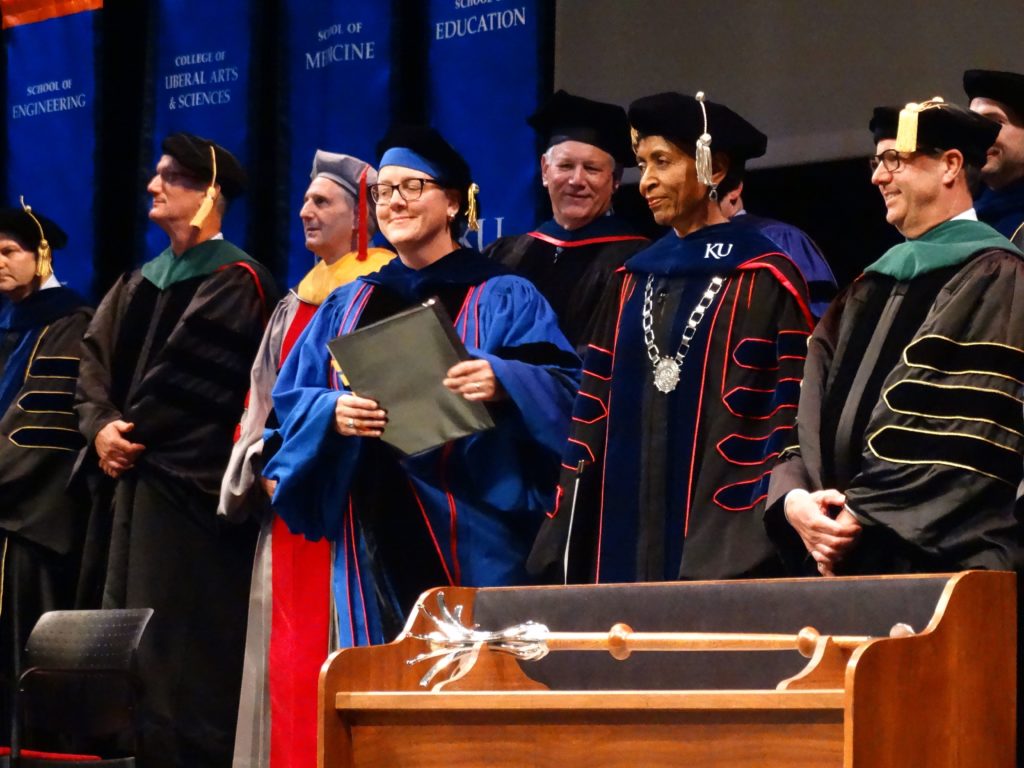 University of Kansas Chancellor Bernadette Gray-Little and other top academic officials formally opened the new academic year Sunday night, challenging students to both accept and be agents of change.

Sunday’s ceremony at the Lied Center marked the 151st convocation of a new term at KU, and much of the ceremony was tinged with a sense of history, from the medieval regalia worn by the academic leaders on stage to reminders about the origins of the university and the state of Kansas. 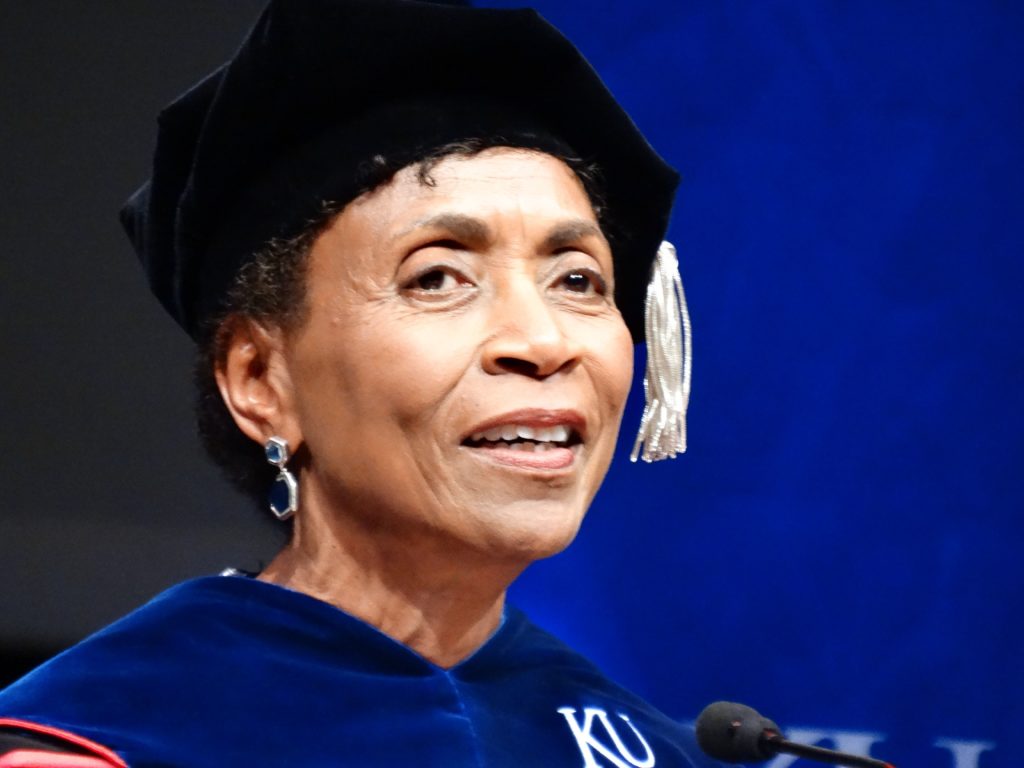 “The University of Kansas has embodied the aspirations and determination of the abolitionists who settled on a curve of the Kaw River in August of 1854,” said DeAngela Burns-Wallace, vice provost for undergraduate affairs. “Their first goal was to ensure that the new Kansas Territory would enter the union as a free state. Another goal was to establish a university.”

But there were also references to many of the social issues confronting the United States today, some of which are dominating this year’s presidential election.

“The past few years have seen a magnification of some of our country’s toughest challenges,” Gray-Little said. “Each day, it seems to be touching on issues such as wealth disparity, climate change, the need for new sources of energy and water, immigration, safety and security, and we could go on.

“These are complicated issues, and they reflect many issues you will study at KU,” she said.

There were also a few moments of levity, both scripted and unscripted, including the processional march that opened the ceremony to the tune of the “Imperial March” from the “Star Wars” movie saga.

Moments later, as she was introducing others on the stage, University Marshal Ruth Atchley appeared to lose her train of thought when she accidentally introduced Gray-Little as “Chancellor of the United States.”

Gray-Little joked about that at the start of her speech, noting that the “Imperial March” had been played the night before, during Traditions Night festivities, and she had casually mentioned to someone how it would be nice to march into the convocation to that song. 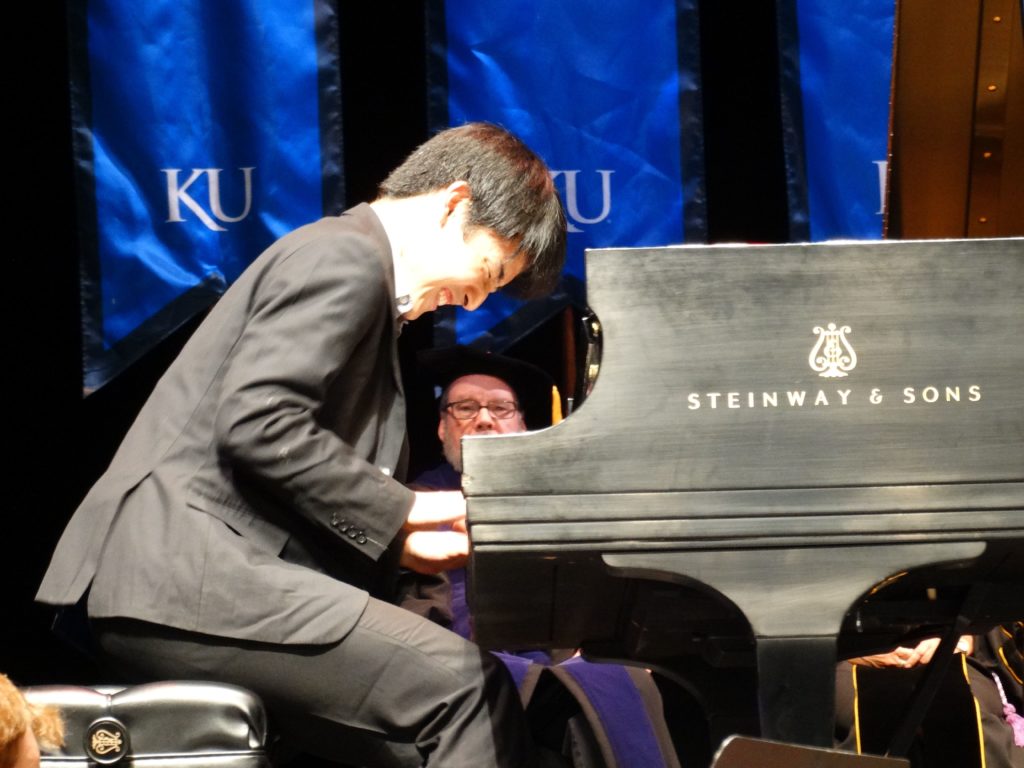 “We have to, because when you’re Chancellor of the United States of America …” she said as the audience of several hundred erupted in laughter.

Kai Ono, a fourth-year student studying classical and jazz piano, provided musical interludes before and during the ceremony, starting with an improvised instrumental version of the Beatles’ song “Blackbird,” followed by another improvised version of Stevie Wonder’s “Sir Duke,” a tribute to the late jazz legend Duke Ellington.

Another KU student, Ike Uri, a senior majoring in sociology, economics, philosophy and Russian, gave an address offering words of advice to the 151st class of incoming freshmen, saying they should take full advantage of both the academic and social opportunities of college.

Uri’s parents, from Concordia, were in the audience to hear the speech, as was his cousin, Melissa Ferguson, a fifth-year senior at KU who was attending her third convocation ceremony.

“It’s exciting, and I really like seeing the staff in their academic regalia,” Ferguson said. “It just gets you ready to have the year start.”