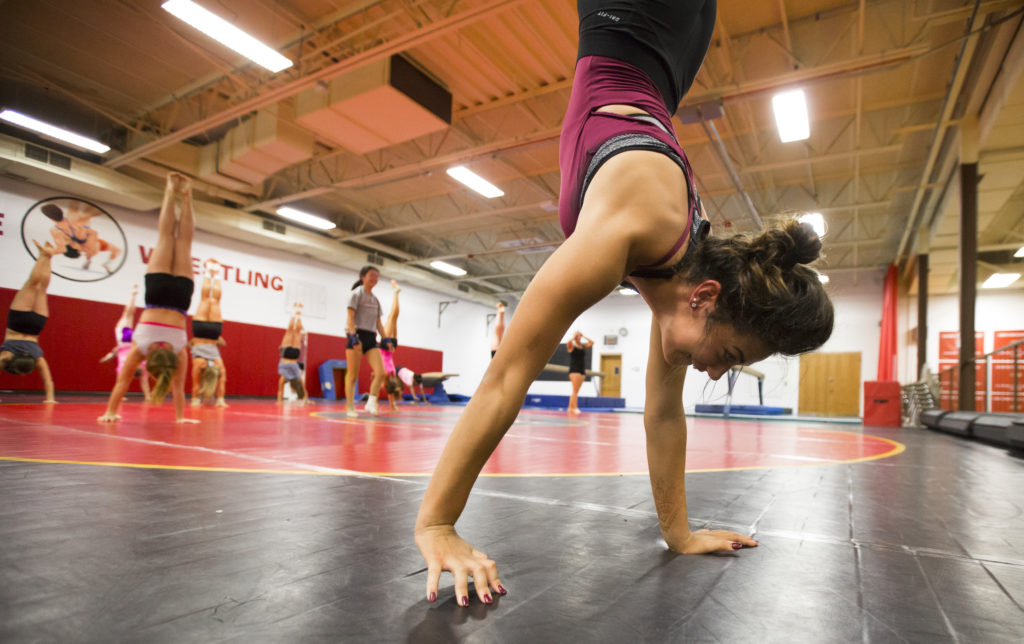 Free State freshman gymnast Kenzie Rorabaugh performs a handstand walk across the length of the practice space on Tuesday, Aug. 16, 2016 at Lawrence High School. This year, the gymnastics team has seen a higher number of girls sign up in comparison with years past.

After watching members of the U.S. gymnastics team win gold medals in the Summer Olympics, plenty of local gymnasts want to make a similar impact at the high school level.

The Lawrence High and Free State gymnastics teams have more than doubled in size from last year, jumping from eight girls to 20 for the first day of practice Monday.

“It’s a huge motivator,” said Brooke Kissinger, who coaches both Lawrence and Free State. “Even for private gyms and everything, they see a higher enrollment after Olympic years. This year, we have Simone Biles, who is the greatest gymnast of all time potentially, so she’s inspiring a lot of people, which is awesome for us.”

The large teams, who practice together, have certainly filled most of the practice area, which also serves as the LHS wrestling room. They spent the first two days setting up and cleaning mats.

With an increase in the number of girls competing this year, both varsity squads will practice in the morning before school and the junior-varsity practices will remain in the afternoon.

It’s a change from last season when the Firebirds didn’t have enough girls to complete a varsity lineup for meets.

“We have a lot of new sophomores that didn’t know that the team existed last year,” Kissinger said. “I’m not sure how that happened. But a lot of them said that they didn’t know that there was a team. We have a small team, so I guess that is very possible. But they all found out about it and came out this year, which is exciting.”

Trujillo, a Wichita North graduate, was an assistant coach on last year’s team and was excited to continue coaching at the high school level. There were more than 30 girls for the first day of practice Monday, filling up all of the school’s courts. 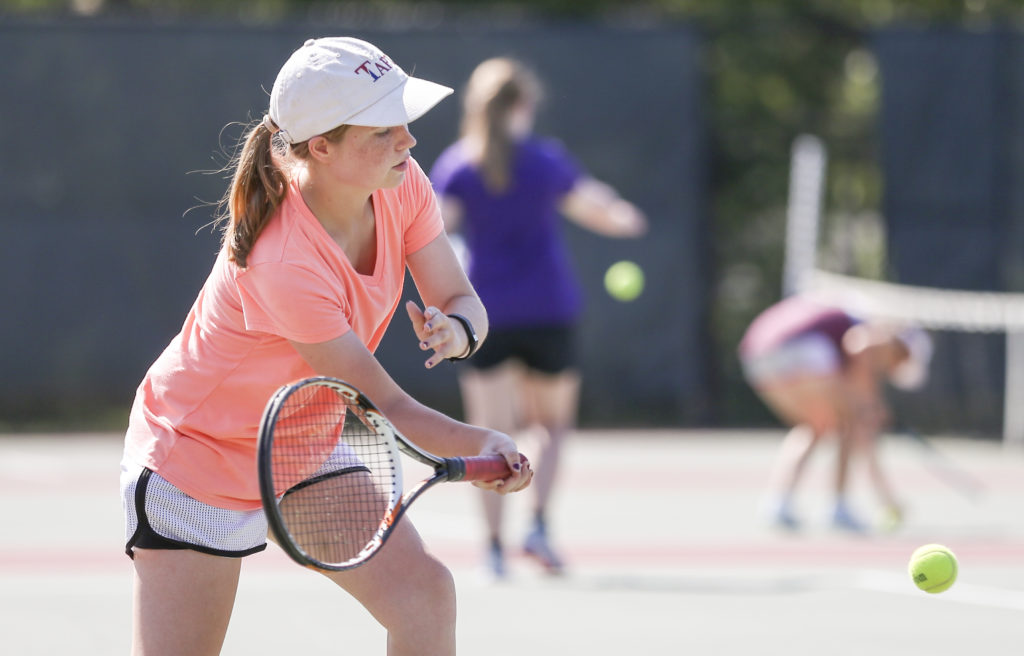 “I can’t wait for this new challenge that I have,” Trujillo said. “I have some support from the team and the parents, which is always reassuring. I’m excited to see what we can do with Free State tennis this year and hopefully continue a tradition of success.”

Lawrence’s girls tennis team opened on Monday with 20 girls, which could grow once paperwork is processed for a few athletes and school begins.

Of the 20 girls at the first practice, about half were freshmen and there was only one varsity returner.

“As an individual, it gives me more challenges to work with new people to increase their tennis ability,” LHS coach Chris Marshall said. “I think as a coach and you wanting to win, you want the same people that have been successful with you in the past.”

It’s difficult to find an athletics program in Lawrence that continues to grow as much as Free State’s cross country team.

Last year, the Firebirds peaked with a record-high 117 runners during the season. About 90 showed up for the first day of practice on Monday, and that number is expected to grow in the next week.

“I think we’ve got a chance to go higher than that, go up into the 120s someplace, which is good,” FSHS coach Steve Heffernan said. “I didn’t see a lot of hands new to cross country (in the first team meeting). That was different. A lot of these kids are returning folks out of that group we had last year.”

With two new assistant coaches, Heffernan said the main goal of the first few days is learning about each kid and devising running plans.

“Half that group showed up for at least a few days of running this summer, if not even more,” Heffernan said. “Which means by the time we get to the end of this week, we might see that we’re quite a ways ahead of where we were a year ago.”

Lawrence’s cross country team had about 60 runners for the first day of practice on Monday. Under first-year coach Laura Koster, the Lions talked about team policies on the first day and went for a short run.

“Really excited,” said Koster, who was an assistant coach last year. “We introduced ourselves. We’re all new to them. I was here last year, but we’re new and we’re excited. We just told them to have a great year.”

A year ago, Lawrence’s girls golf team opened the season with only two members.

Fast forward to Tuesday and the Lions were expecting 10 to 12 golfers for the upcoming year.

“It’s right where we want it,” LHS coach Jennifer Schmitt said. “We definitely wanted to build numbers and wanted to have kids out who are just trying the sport. A lot of underclassmen and younger girls who came out for something new, which I think that’s a cool thing.”

“In the days of club ball and kids who have played for years, it’s nice to see them going out on a limb and trying something new like golf,” Schmitt added.

Schmitt said about half of the group is freshmen, which gives the team a strong base for the future.

Free State’s girls golf program nearly doubled in size with 11 girls showing up for tryouts on Monday and Tuesday.

“We’ve had 11 the last couple of days, so thrilled about that,” FSHS coach Layne Meyer said. “It is tryouts, so I don’t know if that’s what we’re going to end up with. But we’re really excited that we have the interest we have and the numbers we have at tryouts this year.”

The Firebirds finished last season with two varsity golfers — six in the program — and Meyer said finding four girls to fill out a varsity lineup is “definitely a goal” this year. 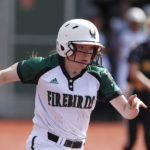