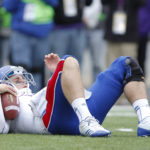 Kansas quarterback Dayne Crist lies with his back to the field after being sacked by the Kansas State defense during the third quarter on Saturday, Oct. 6, 2012 at Bill Snyder Family Stadium in Manhattan.

Texas A & M transfer LaQuvionte Gonzalez, a small, fast wide receiver, gave the small crowd at the Kansas spring exhibition someone to talk about on their walk out of the stadium.

He looked great, and he looked even better during spring conditioning, where he drew praise from the coaching staff as a hard worker blessed with leadership skills. He has matured a great deal since leaving A & M. Sometimes, a change of scenery brings on a change in attitude.

Most of the time, it’s same player, different address.

Kansas coach David Beaty is rolling the dice on a pair of Alabama football players who decided to leave Nick Saban’s peerless college football program to play for Beaty, whose first college victory won’t come until Kansas mops up the field with Rhode Island five weeks from today.

Daylon Charlot, the ninth-ranked wide receiver in the nation in the Class of 2015, left Alabama, where he caught two passes for nine yards as a true freshman. Saban lamented Charlot’s lack of patience in deciding to leave. Impatience can be a function of immaturity. As Gonzalez has demonstrated thus far, some young men do grow up overnight. So Charlot comes to Kansas, a move he announced Thursday, without disturbing baggage.

A day later, 6-foot-5, 305-pound offensive tackle Charles Baldwin announced he too will come to Kansas. Leaving Alabama wasn’t his idea. He was tossed for violating team rules. Time will tell whether the scale shows a higher number for Baldwin or the baggage he brings with him.

Baldwin was a top recruit in his junior-college class and turned down a number of other heavyweights to attend Alabama.

Junior-college rankings are nice, but most Kansas football fans have suffered through countless reminders that the rankings and $4.75 will get you a venti caramel macchiato at Starbucks: Andrew Bolton, Jocques Crawford, Marquel Combs, Chris Martin, Marcus Jenkins-Moore, Kevin Short, Pearce Slater.

Baldwin arrives at Kanas with two strikes. Strike 1: He was first-string right tackle heading into spring football for Alabama and was bumped down the depth chart. True, the bottom of ‘Bama’s depth chart has more pure talent than the top of KU’s at most positions, but it still can’t be viewed as a positive. Strike 2: He violated team rules and was bounced from the program, which says that either Saban thought the rule violation was significant or he was underwhelmed by Baldwin’s talent effort, put him on a zero-tolerance list and cut ties at Baldwin’s first transgression. Either way, not encouraging.

Kansas has hit on a few productive transfers from four-year schools in recent years, but the batting average is much closer to the Mendoza line than to Cooperstown consideration.

In order, from working out well to flopping, a look at 16 recent transfers to KU from four-year programs:

1 – Marcquis Roberts: Gets the nod over two other productive four-year transfers because this will be his second season as a starter. Smart, tough linebacker has played through a lot of knee pain in a career that started at South Carolina. He deserves to see how good he can become playing with less pain and might get that chance this season.

2 – Nick Harwell: Off-field issues at Miami of Ohio led to his suspension and then transfer. He caught 44 passes for 470 yards and five touchdowns in his one season with the Jayhawks.

3 – Nigel King: A physical receiver, he had terrific hands and knew how to go up and catch wayward passes. Turned 30 receptions into 537 yards and a touchdown, but only stayed one year after transferring from Maryland, declaring early for the NFL draft. Not fast enough, he went undrafted.

4 – Justin McCay: After transferring from Oklahoma, where he never caught a pass, the Bishop Miege graduate had 27 receptions in two seasons at Kansas and did strong work on special teams. We’ll never know if he would have made bigger contributions as an outside linebacker or strong safety.

5 – Corey King: Instead of using the scholarship on a high school recruit, Kansas opted for the University of Miami graduate transfer. He started every game at defensive tackle for the 0-12 Jayhawks.

6 – Joshua Williams: A graduate-transfer from Nebraska brought to KU by Charlie Weis, Williams started all year at defensive end, but did not register a sack. He was a solid guy and decent player, but the scholarship would have been better spent on a four-year player.

7 – Darius Willis: Recruited to Buffalo as a quarterback, he switched to linebacker, was demoted to second team by Turner Gill’s successor and then joined Gill at Kansas as a linebacker. Had an OK senior season at defensive end for Weis.

8 – Kent Taylor: The No. 1-ranked tight end in the nation in high school, Taylor followed Weis from Florida, where Charlie was offensive coordinator, to Kansas. Not much of a blocker, he always looked as if he were about to become a big-time threat. It never happened. Caught two passes for five yards as a freshman at Florida, 15 for 179 yards in 2015 for Kansas and then ended his football career with a year of eligibility remaining.

9 – Jake Heaps: Freshman phenom turned sophomore bench-warmer at Brigham Young, Heaps was a bad fit at Kansas because he was not well-suited to facing a steady, heavy pass rush. Ducking for cover became his go-to move. Started his KU career as a starter and was benched, following the same pattern as at BYU.

10 – Dayne Crist: Crist’s robotic nature surfaced when Kale Pick was wide open in the back of the end zone at Northern Illinois and Crist, the anti-Todd Reesing, hesitated before missing him by a lot.

I had to ask: Did it catch you off guard, seeing him so wide open?

“I don’t know if it caught me off-guard too much,” said Crist, who was recruited to Notre Dame by Weis but played for and was benched by Brian Kelly. “I mean, it was a little surprising coming up and seeing it because it shouldn’t have been there.”

But it was there and he was the last one in the stadium to react to it.

As was the case at Notre Dame, his performance turned him into a former starter.

11 – Nick Sizemore: Gill liked him so much at Buffalo he took him as a transfer at Kansas. In three seasons in Lawrence, he caught two passes for 10 yards and rushed for three yards on one carry. He contributed on special teams.

12 – Mike Ragone: Former Notre Dame tight end’s knees were shot by the time he came to Kansas as a graduate transfer. Caught two passes for 11 yards and a touchdown.

13 – Anthony McDonald: Highly ranked out of high school, his development was stunted at Notre Dame because of an assortment of injuries. More of the same in his one season at Kansas as a fifth-year senior.

14 – T.J. Millweard: UCLA won a heated recruiting battle for Millweard, a quarterback blessed with a fertile brain but not enough arm strength to earn playing time, other than as a holder. Spent three seasons in the Kansas program and completed 2 of 4 passes for 14 yards and an interception. Only pass of 2015, against West Virginia, was intercepted. Showed great skill in flashing play-call signs from the sideline.

16 – Joshua Stanford: A talented wide receiver emotionally ill-equipped to play football, Stanford took a four-game leave of absence during his time at Virginia Tech. Kansas turned a color-blind eye to that big, red flag and burned a scholarship on him anyway. The return on that investment that could have been used on a four-year player: Two games, three receptions, 19 yards. He’s out of the program and out of chances to play football.