Six years in advance, Kansas officials gear up for 2022 redistricting 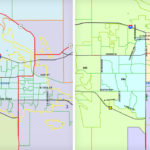 These maps drawn up by a three-judge federal court panel in 2012 show current Kansas Senate, left, and House, right, districts in the Lawrence area.

TOPEKA — Kansas lawmakers won’t have to redraw congressional and legislative district maps for another six years, but state and federal officials aren’t waiting that long to get ready for the process.

Officials from the U.S. Census Bureau met Tuesday with staff from the Legislature’s nonpartisan Research Department to review the process they’ll use and get familiar with the types of data and computer software that will be essential in the next round of redistricting.

“It’s a long process, so we want to get information out early so folks can start preparing whatever material they need — geographic information; software — so they can start thinking about how they’re going to implement the program when it comes time to actually start redistricting,” said Michael Ratcliffe, the Census Bureau’s assistant division chief for geographic standards in Washington.

Article 1, Section 2 of the U.S. Constitution states that, “Representatives and direct Taxes shall be apportioned among the several States … according to their respective Numbers,” and that an actual enumeration, or census, of the people must be conducted every 10 years.

The next decennial census will take place in 2020, and states have two years after that in which to draw new maps for the congressional districts and state legislative districts.

The census not only counts the number of people residing in each state, but maps them down to small geographic units known as census “blocks.” Legislatures then use that data to draw maps that are supposed to be as equal in population as possible.

The process can be among the most intensely political actions that state legislatures have to make, with major political parties jockeying for position and incumbent legislators angling to protect themselves in the upcoming elections.

In fact, following the 2010 census, Kansas lawmakers in 2012 were unable to come up with a redistricting plan of their own, and ended up ceding the process to a three-judge federal court panel, which drew the maps that are now in place.

And there are already indications that the next round of redistricting in 2022 will not be any easier.

According to the most recent annual estimates, there are currently just over 2.9 million people living in Kansas, about 2.1 percent more than the last official census in 2010. But those estimates also showed there has been a steady and dramatic shift in population out of rural areas and into the state’s major urban centers, particularly in the Kansas City and Lawrence metropolitan areas.

Ratcliffe said that trend is likely to continue through the 2020 census, in Kansas and in many other states.

“When you look just at the population trends on the Great Plains for the last hundred years, it’s been a shift away (from rural areas),” he said. “Some of the counties out here in Kansas, Nebraska and the Dakotas hit their peaks in the late 1800s, others in the early part of the 20th century,” he said. “And that’s happening all across the country, really, not just out here.”

The result of that is likely to be that the Kansas City, Lawrence and Wichita metropolitan areas will have more seats in the Kansas House and Senate, while there will be fewer rural legislators whose districts will become much larger geographically.

There may also be significant changes in how the state’s four congressional districts are configured. The “Big First” district, which now covers all of western Kansas and much of central Kansas, including the cities of Emporia and Manhattan, will have to become even larger geographically, while the Second and Third Districts of eastern Kansas, and the Fourth District around Wichita, will become more compact.

The officials who met at the Statehouse Tuesday, however, will not be involved in those decisions. Instead, their job will be to manage the data files and software programs that enable lawmakers and other interested people to draw maps and submit their proposals.

“We provide the data. The states then do the work. We stay out of that,” Ratcliffe said.