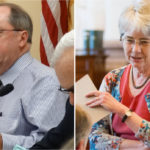 Topeka ? An open rift among Kansas Senate Democrats was exposed recently after a vote on a school funding equity bill that is now being reviewed by the Kansas Supreme Court.

“Marci: I’m done with you,” Hensley wrote to Francisco in a text message obtained by the Journal-World. “You vote to undermine my leadership all the time. To vote ‘pass’ on a bill that is clearly unconstitutional is a travesty to the education community.”

The message was sent to Francisco and two other individuals. It has since been forwarded and copied to a number of others, and was later obtained by the Journal-World. Both Francisco and Hensley confirmed the content of the text message.

“I made it very clear in an open caucus meeting the day (March 24) we voted that I was extremely frustrated that the Senate Democrats didn’t produce eight solid ‘no’ votes on an anti-education and unconstitutional bill,” Hensley said in an email to the Journal-World, when asked about the message.

“He was very unhappy about my vote, which I understood,” Francisco said when asked about the message.”I understand he was angry, and I’m guessing he just said this in anger.”

In her official explanation of vote, Francisco said she wanted to vote in favor of a funding equity bill in order to answer the Supreme Court’s threat to close public schools July 1 if lawmakers didn’t pass one.

But she disagreed with the content of statements contained in a preamble to the bill which, among other things, asserts that overall funding for public schools is constitutionally adequate — a separate issue in the school finance lawsuit which the court has not yet addressed.

“In no way can the Legislature, with this bill, confirm that the total amount of school funding meets or exceeds the Supreme Court’s standard for adequacy,” Francisco said.

Hensley’s message saying, “I’m done with you,” is significant, especially in an election year, because as minority leader, he controls the purse strings of the Senate Democrats PAC, a political action committee that raises money to help elect Democrats to the Senate.

He also serves on the executive committee of the Kansas Democratic Party, which influences how the state party allocates its campaign funds among candidates.

Hensley, however, said he does not intend to withhold support for Francisco, who faces a Republican challenger in this year’s general election.

“In every election since 2004, I’ve strongly supported Senator Francisco for re-election, and will continue to do so as long as she’s a candidate for Senate,” he said.

Hensley’s text message, however, was not the only indicator of the rancor stirred up by the vote, which took place on the final day of the regular session, March 24.

The next day, Hensley filed what is called a “constitutional protest” against the bill, and his protest was recorded in the Senate Journal. Six of the other seven Democrats in the Senate joined in that protest, including two others who also voted “pass” on the bill: Sens. Tom Hawk of Manhattan and David Haley of Kansas City.

Routinely, when any senator offers an explanation of his or her vote to be entered into the record, other senators are allowed to join in those comments, unless the senator making the original comment objects, which almost never happens. But in Francisco’s case, Hensley did.

According to the Senate Journal: “Senator Francisco requested the record to show she concurred with the ‘Constitutional Protest’ offered by Senator Hensley on S Sub HB 2655. On objection, the request was denied.”

“In the event that my constitutional protest were to become evidence in any court hearing involving the school finance bill (Senate Sub. for House Bill 2655), I was only comfortable allowing those senators that I believed actually supported the protest to attach their name to it,” Hensley said.

In addition to his sharp comments to Francisco, Hensley’s text message also reflected his deep suspicion of another Democratic senator from Douglas County, Tom Holland of Baldwin City.

“Tom Holland is in agreement because he wants to be minority leader,” Hensley wrote. “Well, you know what? I want to be the next Senate president.”

In his email response to the Journal-World, Hensley did not directly respond to questions about that comment.

“It speaks for itself,” he said. “However, I’ve talked to all parties involved, said my peace, and moved on. I am focused on the priorities that matter, especially reversing the Brownback agenda by getting more Democrats elected to the Kansas Senate.”

However, Tim Graham, Hensley’s chief of staff, said in a separate interview that the rift between Hensley and Holland dates back to two earlier attempts Holland has made to unseat Hensley as minority leader.

The first occurred shortly after Holland’s unsuccessful run for governor in 2010, Graham said, when the Democratic caucus had to reorganize following the resignation of former Sen. Janis Lee, who’d been appointed to the Board of Tax Appeals. The second occurred when the caucus reorganized again following the 2012 Senate elections.

For his part, though, Holland said he has no desire to run for minority leader now, and he strongly supports Hensley in that position.

“I fully support Anthony Hensley as our Senate minority leader and will continue to do so,” he said.