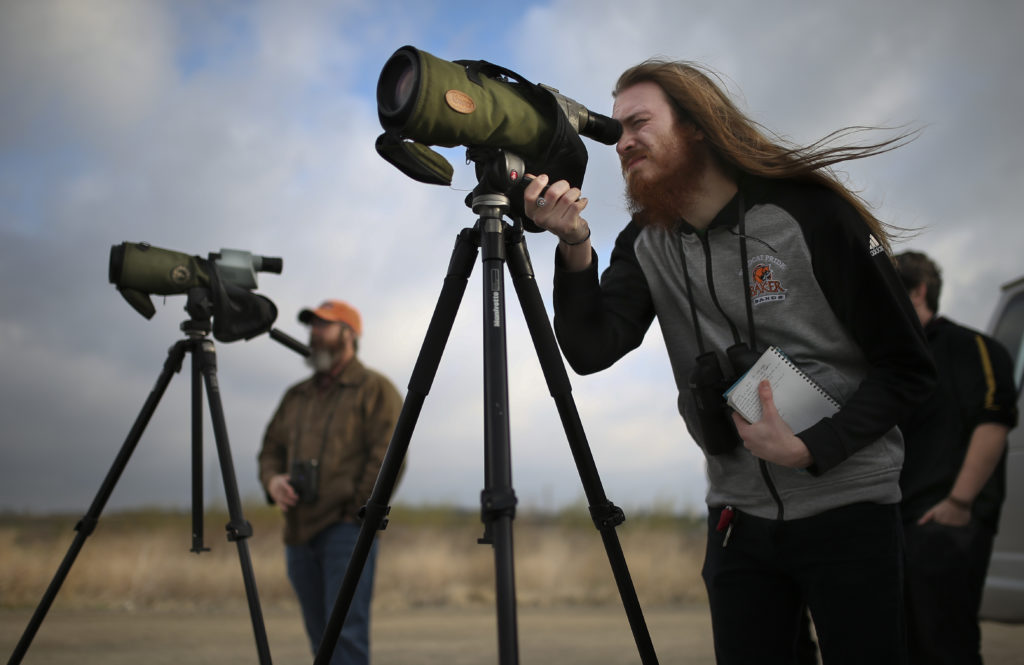 Baker University fifth-year senior Mike Sturm, Baldwin City, steadies a scope as he looks across a pool of water to spot a nest of shore birds during a Baker biology class trip with Scott Kimball, assistant professor of biology, back left, on Thursday, March 31, 2016 at the Baker Wetlands. The class, which has taken several trips to the Baker Wetlands throughout the semester, spent part of the morning observing various bird species and their nests at the wetlands.

It was a good sign the frogs were singing so loudly early in the morning in the marsh to the north of the viewing lot, Kimball said. They would soon be laying eggs, which would provide food for the growing number and diversity of birds living or visiting the wetlands.

It wasn’t at the frogs’ marsh that Kimball and six students trained their binoculars and three scopes, but at the pool of open water to the south. Soon, Kimball started pointing out and naming species for his students and explaining the differences between divers and dapples and challenging them to identify a bird among the ducks.

“That one is not a duck. What is it? That’s what you’re going to have to figure out,” he said before identifying the bird as a coot.

Coots aren’t the only thing getting discovered at the wetlands. Thousands of visitors — more than three times the number projected — have come to the new Baker University Wetlands Discovery Center since the center’s opening in September. The number of people discovering that hundreds of acres of man-made wetlands have been built just southwest of 31st and Louisiana streets is growing each day.

The growth of the wetlands was made possible through Baker’s agreement with the Kansas Department of Transportation to extend the South Lawrence Trafficway through the school’s wetlands property. In exchange for 58 acres of wetlands KDOT needed along 31st Street, KDOT agreed to develop another 410 acres of new wetlands and provide the $1.5 million to build the Baker University Wetlands Discovery Center.

The enlarged wetlands has made the Baker property a greater resource for migrating and native birds.

The viewing site on the newly realigned section of County Road 1055 and just south of the South Lawrence Trafficway was a good spot for bird watchers, Kimball said. ?

“It’s an opportunity to see a lot of great birds without going on a big walk,” he said. “Walks are great, too. The trails give great access to the wetlands.”

The new wetlands plus the existing wetlands total 927 wetland acres immediately south of Lawrence. The property is a unique resource for nature lovers because it provides multiple wildlife environments in a relatively small area, Kimball said.

“There’s riparian areas along the river, forest, wet meadows, tall-grass prairie, marsh and some swamp,” he said. “We’re going to burn the grass soon. We’re hoping that will bring hawks from all over Kansas to feed. We should see a variety of hawks we don’t typically see in this part of the state.”

“We do bimonthly bird counts,” Kimball said. “The number of species have almost doubled. Where we used to see about 40, we now have 70.”

Roger Boyd, director of natural areas for Baker University, said there was a number of reasons for the increased number in bird species and populations beyond the wetlands’ expansion. Improved water quality, the end of most onsite or nearby construction associated with the SLT and the replenishing of pools from the 2011-12 drought years were also factors, he said.

There is little doubt, however, birds flocked to the newly opened areas. Kimball said he and others at Baker were amazed to see birds on new pools east of County Route 1055 that filled up rapidly with their completion last fall after a 3-inch rainfall.

“The first day they were filled with birds,” he said.

Birds are not the only visitors flocking to the wetlands. Boyd said the Discovery Center has had 3,500 visitors since it opened in September. He doesn’t know how that compares with years past because there was no way to count visitors before the center opened. But Boyd does know the number is exceeding expectations.

“We were estimating 1,000 visitors,” he said. “Numbers were down in January, but we started having a lot of visitors with the mild weather in February.”

That number counts only those who visit the Discovery Center. Boyd said he saw many more visiting the wetlands, some of whom are regular hikers, bikers or viewers. 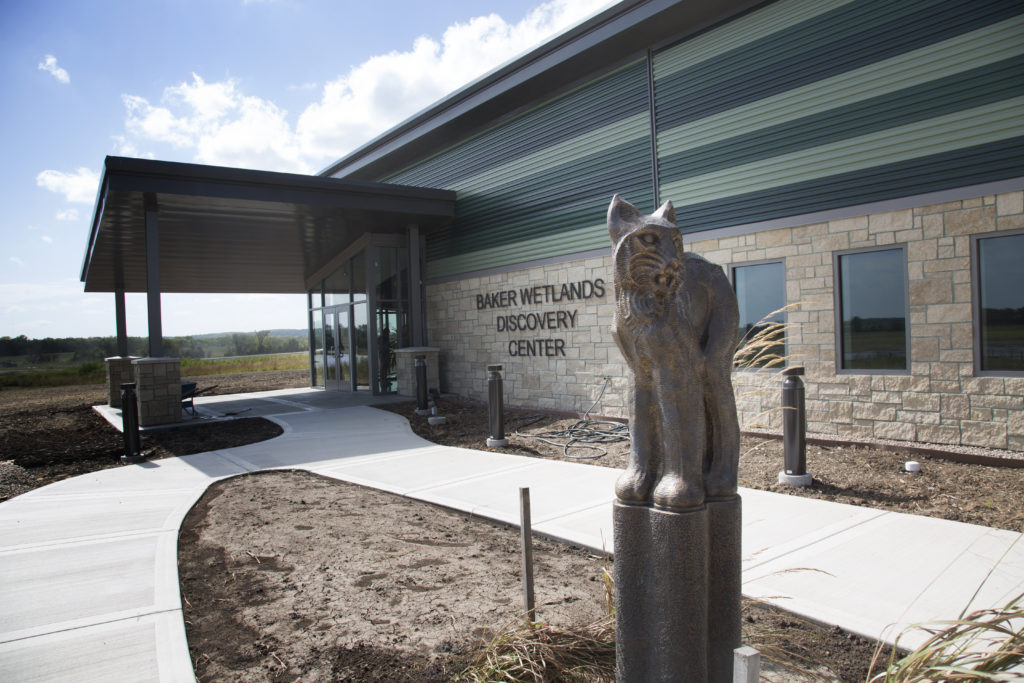 Baker University is adding to the number as it is taking advantage of the wetlands and Discovery Center as recruiting resources. Kevin Kropf, senior director of admissions, said when the university had a high school recruitment day April 2, it bused all 25 visiting juniors and seniors and their parents from the Baldwin City campus to the wetlands.

“We have this amazing facility,” he said. “Students need to see this. We had our admissions visit with the students there. They were able to walk the trails, use scopes that were provided to spot birds and look at exhibits in the Discovery Center. It was a really good deal.

The university plans another wetlands-centered recruitment event April 30 with a BioBlitz. Kropf said area high school biology teachers have been invited to visit the wetlands that day with their best junior students. They will then break into teams to catalog as many of the organisms living in the wetlands as possible

Boyd said the BioBlitz would identify flora, fauna, fungi and even collect samples of bacteria with petri dishes.

The goal is not only to catalog the diversity of wetlands’ life but also recruit some of the bright, young biology students to Baker and help build the school’s brand in ecology, Kropf said.

“Ecology is not the No. 1 interest of many high school students, but for those who do have that interest the fact we do have that out there and an endowment from the state for continuous research support for the wetlands is a tremendous asset,” he said. “It’s important we use that resource as not a shiny new thing but have a commitment to research. If you’re thinking you want a master’s or Ph.D. in ecology, this is the kind of experience you have to have as an undergraduate.”

John McGrew firmly believes young people should get out from in front of TVs and computer screens to enjoy the outdoors.

Rather than just preach that message, McGrew has worked to give Lawrence children options for what he call “nature deficit disorder.” He founded and is now chairman of the board of Outside for a Better Inside.

McGrew said the organization decided to take advantage of the availability of the Baker University Wetlands Discovery Center to have its second annual Family Fun Day at the center. The free event will be from 9 a.m. to noon Saturday, April 16, at the Discovery Center, 1365 N. 1250 Road.

Roger Boyd, director of natural areas for Baker University, said there are a number of events planned to connect children with nature. Baker emeritus biology professor Cal Cink will demonstrate bird banding, scopes will be set up to view birds in the wetlands, canoe trips will be available, walks scheduled to view wildlife from the wetlands’ trails and a variety of snakes, reptiles and amphibians will be on display for the children, he said.

“It should be a fun and education day for children and families,” he said.