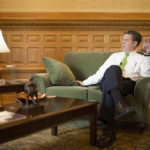 Topeka ? Gov. Sam Brownback’s administration notified the Kansas Public Employees Retirement System on Friday that it would delay a $92.6 million payment into the pension fund that is due to be paid on April 15.

The delayed payment is not expected to impact KPERS beneficiaries, which include teachers and other state employees. Delaying the payment, though, will give the state more flexibility to deal with shortfalls in state funding, but will do so at a cost because the KPERS payment is required to be repaid with interest.

Kansas lawmakers gave the administration authority to delay the KPERS payment as part of the budget bill it passed earlier in the session. But budget director Shawn Sullivan said the administration hasn’t decided yet whether the payment will be made before the end of the year, or carried over into fiscal year 2017, which begins July 1.

“No decision has been made as to whether this will be used as a budget balancing tool for this fiscal year, but this action allows us to maintain the flexibility provided by the legislature through the budget bill as we wait for the Consensus Revenue Estimating (CRE) group to provide new revenue numbers later this month,” Sullivan said.

The money represents the state’s contribution to the retirement accounts for public schools, community colleges and technical schools, but Sullivan insisted the delay will have no impact on KPERS beneficiaries.

Sullivan said that because the payment is due April 15, the administration had to make a decision immediately about whether to take advantage of the budget provision that allows for a delayed payment.

That provision, however, also says any delayed payment must be repaid no later than Oct. 1, with 8 percent annual interest, which is KPERS’s average rate of return on investments.

So far this fiscal year, the state has collected about $81 million less in taxes than was projected in the most recent revenue estimates published in November. Revenue estimaters will meet again April 20 to revise those estimates.