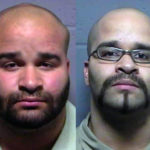 The 15-year sentence a federal judge ordered Los Rovell Dahda to serve on Wednesday wasn’t a big surprise to his attorney, Richard Johnson, whose client had been convicted on July 23, 2014, of marijuana trafficking.

It was the $16.9 million fine that federal Judge Kathryn Vratil ordered Dahda to pay even though he is indigent.

“That is wildly high,” Johnson said after the hearing. “It’s way over the line.”

Dahda and his twin brother, Roosevelt Rico Dahda, 33, both of Lawrence, and Justin Cherif Pickel, of San Lorenzo, Calif., were found guilty last year in a jury trial on several charges surrounding the marijuana trafficking ring.

More than 30 people were indicted in the case on drug charges in July 2012, including several Lawrence residents.

Federal prosecutors said the ring had distributed more than 2,200 pounds of marijuana over at least seven years, and they estimated the value of that was almost $17 million.

On Tuesday, Los Dahda’s brother, Roosevelt Dahda, was sentenced to nearly 20 years in prison for helping orchestrate the conspiracy.

Vratil didn’t impose a fine on Roosevelt Dahda Tuesday because he is indigent.

But on Wednesday, when Vratil was sentencing Los Dahda to 15 years in prison, she learned from Johnson that the federal government had failed to file a forfeiture case on time.

A forfeiture action, common in drug cases, is when the government attempts to recover money or assets identified as proceeds from criminal activity.

Initially Vratil did not plan to assess a fine against Los Dahda.

But Johnson said he had done research and, citing federal statutes, said his client never waived his right to a jury trail for the forfeiture case and that the deadline for that is when the jury is deliberating the criminal case.

Vratil asked prosecutor Terra Morehead if that was true.

Morehead argued that she had talked to the defense attorneys about the forfeiture case and they did waive their clients’ right to a jury trial. But she did not have a transcript of the conversation and did not have any emails to verify it.

Vratil asked Henri Watson, defense attorney for Justin Pickel, if he could recall the conversation. (Pickel will be sentenced in November.)

“I don’t recall,” said Watson, who was sitting with the audience observing the sentencing. “We (defense attorneys) actually talked about it. We were surprised that it wasn’t submitted to the jury.”

Vratil returned to the sentencing telling Johnson, “It looks like you are trying to sandbag the government on this.”

She told Johnson and Los Dahda she “can make (the forfeiture) moot.”

Los Dahda instead would be fined almost $17 million, Vratil said.

“You can research that,” she told Johnson.

After the sentencing, Johnson said he planned to appeal both the prison sentence and the fine.

Although the federal government estimated the revenue the men got from selling marijuana was almost $17 million, the amount seized is probably much lower.

Johnson said the amount doesn’t exceed five figures. He also said a couple of properties the men owned are not worth much. Dahda owned Gran-Daddy’s BBQ and a former fire station in northeast Kansas City that he was renovating.

A spokesman for the U.S. Attorney’s Office District of Kansas said there are no records available to the public that show how much money law enforcement has taken in.