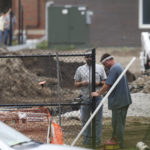 Officials for the city of Lawrence and the Lawrence school district said Thursday they will discuss a plan for the city to take over building inspections for the remaining six schools that are scheduled for makeovers as part of a $92.5 million bond issue.

In addition, Rick Doll, the district’s superintendent, said he had cut short the district’s contract with Combes Construction Co., the contractor at New York Elementary School, where a number of code violations were found, according to a memo from Doll to the school board Thursday.

Twenty schools were slated for renovation last year as part of the construction package.

Thirteen schools are currently or were recently under construction, and State Fire Marshal Doug Jorgensen announced Thursday that his inspectors would begin joint inspections of the schools as soon as next week. Construction is complete at only one school, Langston Hughes Elementary, said Julie Boyle, the school district’s spokeswoman.

Jorgensen said his office on Thursday had contacted the school district to get the names of the inspection companies the district has contracted with. Inspections will be done jointly with the fire marshal’s office inspectors and the third-party reviewers.

“Our office will continue to work with the school district, the city, the private inspection companies and the contractors to the best of our ability and as the codes allow, to make sure that all of the school buildings in Lawrence are safe and are being constructed and maintained to the current codes,” Jorgensen said.

The school board will consider the inspection plan at 7 p.m. Monday, and the City Commission will consider it at its meeting at 5:45 p.m. Tuesday. The plan must be approved by both the board and the commission, a Thursday news release from the city said.

Under the plan, the school district will pay 50 percent of the cost of the city inspections. It’s not yet known how much that will amount to.

The announcement follows an investigation by the Lawrence Journal-World that found the county inspector charged with overseeing a large portion of the construction was not authorized to enforce building codes for the school projects.

In addition, the school district did not have an inspector overseeing safety on construction sites, but left that responsibility to the contractor.

Last month, an 8-year-old boy was seriously injured when a 350-pound gate fell on him at New York Elementary School.

Combes Construction, the New York school contractor, has not returned phone calls for a month requesting an interview.

Doll said in memo Thursday that the final piece of Combes’ contract was removed. That piece required the company to connect the school to the city sewer.

“This work will be performed by a yet-to-be-determined contractor,” Doll wrote.

The district did not elaborate Thursday on why the Combes’ contract was cut short, but said further detail might be available at Monday’s school board meeting.

Doll also said the district would re-inspect the school using a private inspector and conduct a “thorough walkthrough with architects, the contractor and school personnel.”

The city usually has jurisdiction for enforcing building codes but had declined to do the inspections because the district wanted the city to waive $280,000 in fees that pay for the inspectors to do the work. Douglas County worked out an agreement with the district to have its inspector do the work for free but only in an advisory role.

The schools that would receive city inspections under the new plan include Broken Arrow, Deerfield, Pinckney, Schwegler, Sunflower and Prairie Park elementary schools.

Diane Stoddard, acting city manager, said the city was agreeing to issue building permits and conduct the inspections on the six schools because city staff would be involved from the beginning of construction.

Unlike the other school projects, the six schools would be issued building permits, have regular city inspections and receive occupancy permits, something that likely will not be done now at the remaining schools.

“Inspections are a process with a number of different steps,” Stoddard said. “We believe with these six projects, we can be involved in all those steps from the beginning.”

Jim Sherman, the county’s codes director, had done school inspections for a year before he left in July for a chief building officer position in Ottawa.

After he left, the district hired third-party reviewers to do the inspections.

Brenda McNorton, chief of the state fire marshal’s prevention division, said the fire marshal’s inspectors who have the authority to enforce building codes would be conducting fire and life-safety inspections, and the district’s third-party reviewers would be inspecting mechanical, plumbing and electrical work at the other 13 schools.

“Our office will do joint inspections with the private inspectors to make sure both groups are on the same page going forward,” McNorton said.

“I think it is definitely a step forward and a good idea,” Amyx said.

Herbert said he wished that the discussions they were having had happened a year ago. He said that there wasn’t a lot anyone could do for schools that did not have proper inspections.

“A lot of the inspections are done before you complete the work,” Herbert said. “The only way to do that now is to tear apart the structure, which I don’t think anyone is calling for. I hate to use a cliché, but I think we have the ship on the right course now.”

Vanessa Sanburn, board president, and Marcel Harmon, board vice president, did not return telephone calls seeking comment for this story.

“The district will not have any further comment about inspections until the school board considers the agreement at its meeting on Monday night,” Boyle said in an email.