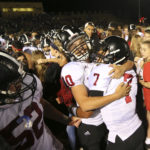 Lawrence High football players have prided themselves on their defense all season long.

In the final two minutes of the City Showdown on Friday, the Lions needed their defense to step up on the biggest drive of their season.

In a playoff-like atmosphere, the Lions kept Free State out of the end zone throughout a 19-play drive, snapping a three-game losing streak to their crosstown rivals with a 14-12 victory at FSHS.

Free State quarterback Bryce Torneden’s final pass from the 20-yard line was broken up in the end zone by LHS senior cornerback Ivan Hollins, who was held up in the air afterward by his teammates.

Once the final horn sounded, the LHS student section rushed to the middle of the field to celebrate with the Lions following their postgame handshakes.

“He’s been a three-year starter for us,” LHS coach Dirk Wedd said of Hollins. “He’s so unselfish. The things he went through this spring … losing his mom … lesser people would give up. But he just reaches down and finds something inside of him. He’s got a huge heart. He’s a special young man.”

The Firebirds (0-3) targeted LHS sophomore cornerback Dante’ Jackson on their final drive with five straight pass attempts. Jackson, 5-foot-7 and 150 pounds, allowed a few short completions and was given new life when Free State receiver Zack Sanders ran past him but couldn’t hold onto a likely go-ahead touchdown.

Eight plays after Sanders beat him on a deep ball — “a learning moment, really,” Jackson said — Jackson knocked a pass out of Sanders’ hands in the end zone with 30 seconds left, saving a touchdown.

“As a sophomore, I lived here before, and I always dreamed of playing Free State,” Jackson said. “I didn’t know it was going to be anything like this. I was just here to help out the seniors, really. They hadn’t had a win against Free State, and I just needed to show everybody that I could step up.”

On the next play, LHS senior defensive end Amani Bledsoe sacked Torneden when the FSHS quarterback tried to escape the pocket. That gave the Firebirds fourth-and-13 from the 20-yard line with 20 seconds left when Hollins knocked away a pass to seal the victory.

“I was going to get that ball no matter what,” Hollins said. “I wasn’t about to let them get that touchdown.”

The Lions (3-0, ranked No. 5 in the coaches’ poll) took a 14-6 lead early in the fourth quarter on a 13-play, 85-yard drive, all running plays by running backs JD Woods and Trey Moore, and quarterback Alan Clothier. Woods finished the methodical drive with a five-yard touchdown.

Woods, the explosive and speedy senior, was held to just 30 yards in the first half before finishing with 142 yards and two touchdowns.

“For the most part we kept them inside,” FSHS linebacker Jay Dineen said. “(Woods) is a great runner when he gets in space. But we knew going in that if we don’t let him get speed, if speed doesn’t pick up, you can’t do much with it.”

Free State immediately answered with a touchdown in the middle of the fourth quarter with strong runs by Torneden, before he dove over the goal line on a one-yard plunge. Trailing 14-12, Torneden tried to find Sanders on the two-point conversion, but overthrew him on the right side of the end zone.

“We had an opportunity to make a play, but we didn’t make it at the end,” FSHS coach Bob Lisher said. “But we didn’t beat ourselves. Lawrence High’s a good football team, and we went toe-to-toe with them the entire night.”

The Lions trailed 6-0 in the first quarter — the first time they’ve allowed a touchdown in the first half this season — when Free State running back Sam Skwarlo busted through the middle of the field for a 31-yard touchdown run.

But the LHS defense was strong for the remainder of the night with big tackles in the backfield by its quick and physical linebackers and linemen.

“This was definitely huge,” Bledsoe said. “We stuck together until the end. We’re a family. Blood, sweat, tears. Just a very emotional game for us.”