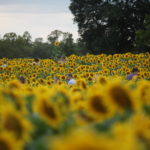 Visitors take photos and pick sunflowers earlier this month at the Grinter Farms sunflower fields between Lawrence and Tonganoxie. Ted Grinter estimated that 25,000 people visited the farm this year. Social media has helped make the fields a growing attraction.

Sunflower farmer Ted Grinter has seen the license plates or chatted with folks from across the United States and the world.

Thanks to the power of social media, the Grinter Farms sunflower fields have gained global notoriety.

The Grinter Farms Facebook page boasts 22,990 followers and includes updates from Ted’s wife, Kris, photos from visitors and even videos that professionals have produced.

The BBC did a segment on the fields, while people from Guatemala actually made their way up to pay the famous fields a visit.

During one of the busier travel times of the year — Labor Day Weekend — it makes sense that one might get some traffic outside the standard Topeka, Lawrence and Johnson County visitors, but this year’s crowd exceeded expectations.

“It was more than I expected,” Grinter said. “I thought I had enough parking with the field in front of the house and the grass strip I planted, and that didn’t even begin to cover it. And then the rain messed things up.”

The mud, though, didn’t seem to deter the visitors from the fields a few miles southwest of Tonganoxie.

Grinter figured the visitors helped the local economy, whether it was a stop for overnight lodging in Lawrence or visit to a local restaurant.

For the Grinters, the ability to keep planting the sunflower fields year after year is perpetuated with donations from the many visitors.

Kris and Ted Grinter suggest a $1 donation for each sunflower visitors pluck from the field where 1 million sunflower seeds were planted weeks and weeks ago. Red collection boxes were set up in the corners of the fields to make dropping in a donation easy.

Grinter would not say how much he collected. Of his estimated 1 million sunflowers, about 50,000 were taken or damaged by visitors making their way through the field.

Grinter also sells corn to local consumers and in the coming weeks will harvest the sunflowers for seeds he sells as bird feed.

But those sales don’t really offset the $10,000 it takes to plant and care for the sunflowers each year.

Per normal farming practices, Grinter rotates his sunflower crop annually. That means next year’s picturesque attraction likely will be back to its spot right along U.S. Highway 24-40. That means very limited parking for a destination in high demand. This year’s fields were along Stillwell Road just west of U.S. 24-40.

The bottom line for the Grinters, though, has been the opportunity to share something special with many, whether it’s an opportunity for families to capture photos, photographers to take senior or engagement photos or even a wedding party.

Dressed to the nines, a wedding party actually made a stop for photos Labor Day weekend, Ted said. The muddy conditions didn’t stop them from making more memories.

How many people actually visit and where they all come from still isn’t an exact science.

Asked whether he had guest books at the fields, Grinter said he didn’t, but that it might be worth doing.

“I should do something like that and I never have,” Grinter said. “It would be kind of neat to see how many people showed up.”