Topeka ? A Shawnee County judge on Thursday granted an emergency stay of an order that threatens to cut off all funding for the entire judicial branch of state government.

That order appeared to calm fears, at least for the time being, that the entire state judicial system could be defunded immediately. But officials throughout state government spent much of the day focused on how to keep the court system open in the long run if Wednesday’s ruling is upheld.

Judge Larry D. Hendricks granted the stay at the request of the Kansas Attorney General’s office, and lawyers on the other side of the case supported that motion. 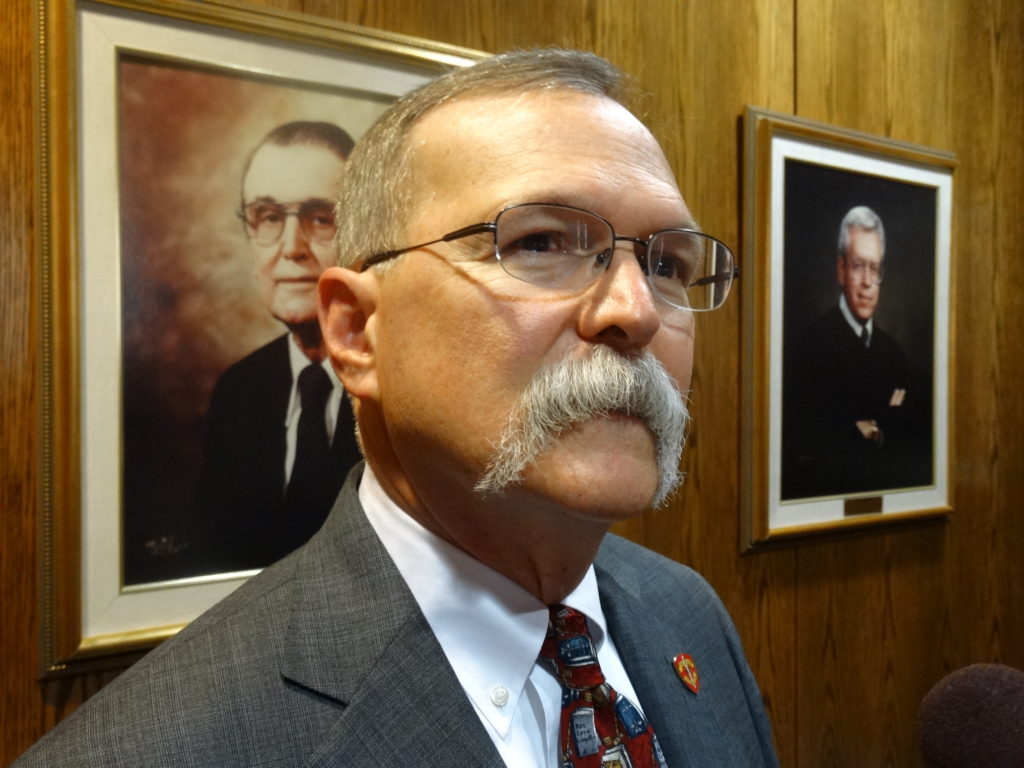 Kansas Chief Justice Lawton Nuss says he plans to monitor developments in a lower court case that threatens to cut off funding for the Kansas judicial system.

Wednesday’s ruling, which sent shock waves throughout the court system, dealt with the relatively obscure issue over how chief judges in district courts are selected.

But in a move thought to be unprecedented in the Kansas Legislature, lawmakers this year passed a separate budget bill just for the judicial branch and inserted a “nonseverability” clause that tied back to last year’s change in the selection process of chief judges.

That meant that if the new law on selecting chief judges was overturned, as it was Wednesday, all funding for the court system would be cut off.

The law was challenged by another judge, Larry T. Solomon, chief judge of the 30th Judicial District, who said it violated the separation of powers doctrine as well as Article 3 of the Kansas Constitution, which says, “The supreme court shall have general administrative authority over all courts in this state.”

Solomon’s attorneys said Thursday that they would file a separate action seeking to overturn the 2015 nonseverability clause, which was not addressed in Wednesday’s decision.

“We have never seen a law like this before and it is imperative that we stop it before it throws the state into a constitutional crisis,” said Matthew Menendez of the Brennan Center for Justice at New York University, who served as co-counsel on the case.

Kansas Chief Justice Lawton Nuss, speaking with reporters during a rare news conference Thursday, was cautious about responding to questions about the case.

“That case is still at the district court level, and it’s been our practice not to comment on cases that are still there because they may eventually come before our court and we want to look at things while they’re here with a fresh eye,” Nuss said.

“That said, I’ve also been paying attention to some reports which suggest that the Attorney General and indeed one of the lawyers involved in this case at the district court level have indicated they are going to try to take steps to make sure the courts remain funded,” he continued. “In addition to that, I’m sure my colleagues and I will be discussing that funding issue and developments at the trial court level just to see what our options are.”

Nuss had originally set up the news conference to discuss the launch of a new project called e-courts that will eventually allow for electronic filing of all documents, motions and decisions in court cases through a web-based system that will be available to the public.

But as it turned out, funding for that project is also threatened by Wednesday’s court ruling.

The 2014 bill that included the language on selecting chief judges was part of a supplemental spending bill for the courts that included several other provisions. One of them established the “Electronic Filing and Centralized Case Management Fund” and authorized the use of $3.1 million a year from docket fees to fund the project.

But that bill also included a nonseverability clause that said if any part of the bill was declared invalid, all other provisions would be invalid as well.

As the judicial committee working on that project got together for its first meeting Thursday, Justice Dan Biles quipped about whether or not funding for the project would still be available.

“I guess we’ll find out whether that’s true over the next few days,” he said.

Wednesday’s ruling dealt only with that 2014 appropriations bill. Judge Hendricks specifically did not address the 2015 funding bill that tied back to last year’s bill, saying that because this year’s bill “exceeds the scope of this Memorandum Decision and Order, the Court declines to address it.”

Hendricks did, however, finish with a general observation about how the legislative, executive and judicial departments of government are often referred to as “branches.”

“But what is all too frequently lost in the metaphor, without going too far out on a limb, is that branches must, ultimately, remain connected with one another on some level in order to survive and thrive,” Hendricks wrote. “A sundered branch is a dead branch, lifeless and ineffective. In the view of this Court, our state Constitution is not so inflexible — or so wooden.”