Two Republican state lawmakers said Thursday that Gov. Sam Brownback’s veto threat is the only thing preventing the Legislature from rolling back at least part of the sweeping tax cuts enacted in 2012.

Sen. Jim Denning and Rep. Melissa Rooker, both Overland Park Republicans, said that at the very least, lawmakers would repeal one element of the 2012 plan, the total exemption granted to more than 300,000 business owners who receive “pass-through” income from their business operations.

“I know we had enough votes in both chambers last year to fix it,” Denning said. “But with a veto threat, nobody’s willing to make a vote that doesn’t succeed.” 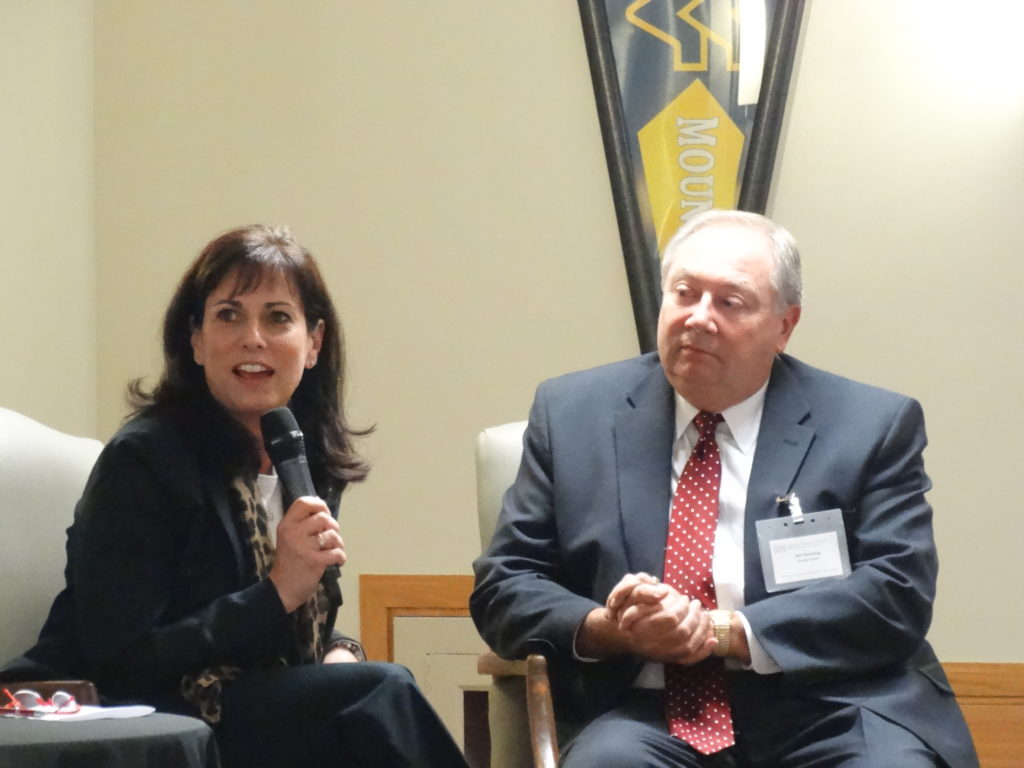 Rep. Melissa Rooker, left, and Sen. Jim Denning, both Johnson County Republicans, speak at the 2015 Kansas Economic Policy Conference at Kansas University. Both favor repealing at least some of the tax cuts enacted in 2012, but say Gov. Sam Brownback's veto threat prevents that from happening.

Rooker, a moderate Republican, said she believes there is enough will in the House to revisit the entire tax code.

“I think that if the veto threat were off the table, we could have a pretty honest discussion of how we can re-balance the tax code,” she said. “We’ve got to bring business back into the equation. Businesses are consumers of state services and ought to be paying something into the system.”

Denning and Rooker spoke Thursday at the Kansas Economic Policy Conference, an annual event at Kansas University. This year’s conference focused on wealth and income inequality in Kansas. The event was sponsored by the Institute for Policy and Social Research and the Kansas Health Institute.

In 2012, at Brownback’s urging, Kansas lawmakers passed a package of sweeping tax cuts. Part of that package exempted so-called “pass-through” income derived from certain kinds of businesses — limited liability corporations, limited partnerships, sole proprietorships and “sub-chapter S” corporations — in which the business income is also the personal income of the business owner.

But Denning said the law went much further than legislators intended. He said the intent was to exempt only the “working capital” of the business, not all of the business income entirely.

Analysts in the Legislature’s nonpartisan Research Department have estimated the pass-through exemption is costing the state about $200 million a year in revenue it would otherwise receive.

But the costliest part of the tax cuts, now estimated at more than $500 million a year, involved eliminating the top income tax bracket altogether, and then dramatically lowering tax rates on the remaining two brackets, with future rate cuts programmed into a formula that is intended eventually to eliminate state income taxes altogether — what Brownback and his supporters have called a “glide-path to zero.”

Rooker said she thinks there is willingness in the House to reconsider that concept, but she said the governor’s veto threat prevents that from happening.

“There’s a group of us that think scheduling future rate cuts into the system five years in advance is not appropriate,” she said. “It takes legislative power away from those future legislators. We’re grabbing that power at this level, and we’re not letting future legislatures determine whether the economy warrants tax rate cuts.”

“The Governor will not support raising taxes on small businesses,” Hawley said in an email statement. “He is focused on holding the line on spending. If we are able to hold (State General Fund) spending in (Fiscal Year) 2016 to the same level as FY 2015, the budget will be balanced without raising taxes on anyone.”

Denning, however, said he does expect the 2016 Legislature to debate the business tax exemption again.

“I look for a bill to be introduced to close the loophole down, and to take the money and apply it to food sales tax, and bring that thing down to below 6 percent,” he said. “I think that would be very hard to vote against.”