And he said that within the next week, he will start utilizing another tool Kansas lawmakers gave him this year, the power to prosecute people for voting illegally.

“We will be filing the first cases within the next week,” Kobach said during a symposium on the Kansas University campus. 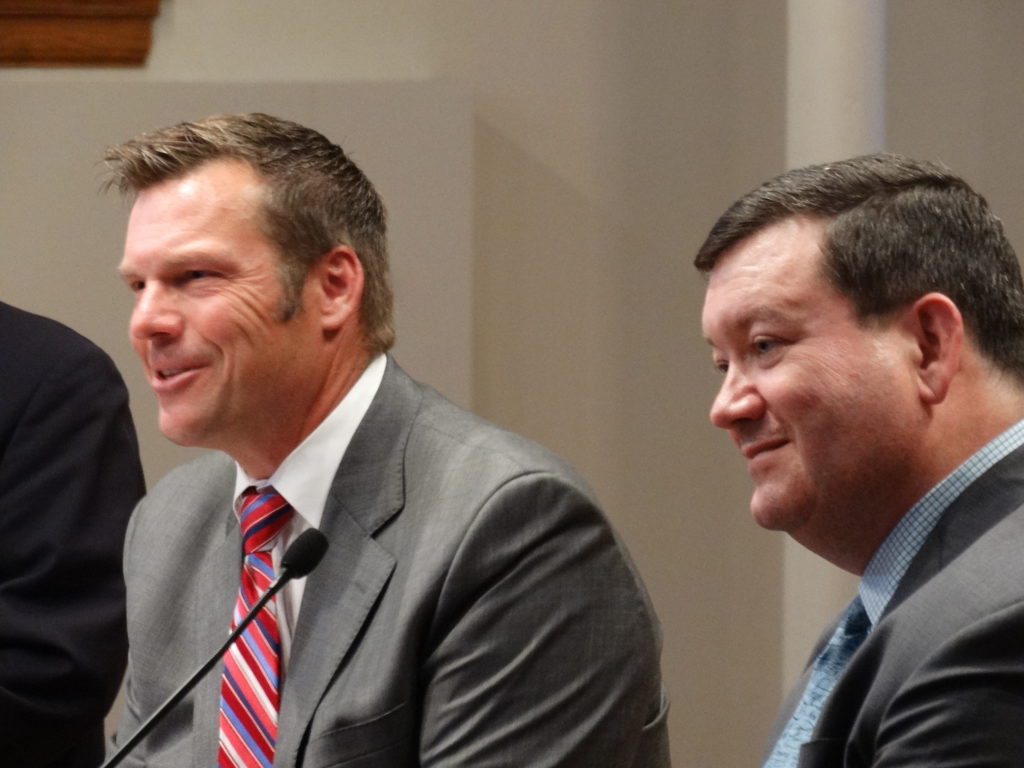 Kansas Secretary of State Kris Kobach, left, and Kansas University law professor Stephen McAllister respond to questions from an audience on the KU campus during a symposium on voting laws entitled Protecting

The symposium, entitled “Protecting the Vote,” was jointly sponsored by several KU departments to mark the 50th anniversary of passage of the Voting Rights Act of 1965, which is considered to be one of the landmark pieces of legislation to emerge from the civil rights movement.

But the U.S. Supreme Court recently struck down one key provision of the act, requiring states with histories of voter discrimination to get federal approval before making changes in their voting laws.

Kansas is one of a handful of states that have begun enacting new restrictions on voting rights. The laws Kobach pushed through during his first year in office require new voters to show proof of U.S. citizenship in order to register and all voters to show photo ID at the polls in order to cast a ballot.

The proof of citizenship law is now being challenged in both state and federal courts. But Kobach said he believes the laws are needed to protect the integrity of Kansas elections.

“It’s amazing how easy it is to double-vote,” Kobach said, referring to the practice of one individual casting multiple ballots from different locations in a single election. “No state in America has the power to stop you from double-voting before it happens. There is no live update of who’s voted and at what time. … But we can detect it after it occurs.”

Kobach also noted that when those laws were enacted, they passed both chambers of the Legislature by wide bipartisan margins.

During the program, Kobach was first interviewed about the laws by KU law professor Stephen McAllister. He then took questions from the audience, many of whom were sharply critical of Kobach and his policies.

One man questioned Kobach’s assertion that during a 15-year period, from 1997 through 2011, there were 237 cases of suspected illegal voting in Kansas that went unprosecuted, calling that a “petty” amount compared to the many millions of ballots that were cast in all elections in Kansas during that period.

But Kobach replied, as he has many times in the past, that such an argument is a “red herring.”

“The question is, ‘Are there enough illegal votes cast to sway any particular election?'” Kobach said. “And the answer is yes, all the time.”

He noted that over a recent 10-year period in Kansas, 24 congressional and state legislative races were decided by 50 votes or less, arguing that in such races, even a tiny number of illegal votes could make the difference.

Moments later, however, Kobach brushed aside criticism that the photo ID and proof of citizenship requirements have an even bigger impact by preventing otherwise qualified voters from being able to cast ballots.

In 2012, for example, Kobach noted that out of 1.2 million ballots cast, 838 people filed provisional ballots because they could not produce photo IDs at the polls.

“That’s .07 percent, or seven one-hundredths of a percent,” Kobach said. “Fewer than one in a thousand.”

Of those, he said, 306 people presented their photo ID before the deadline when the final canvass was taken. That left 532 people in a single election whose ballots were not counted because they could not produce a photo ID, more than double the number of allegedly illegal ballots cast in Kansas over a 15-year period.

“The evidence just isn’t there” to show the laws are suppressing voter turnout, Kobach said.

Several people also questioned why Kobach has opposed giving Wichita State University mathematician Beth Clarkson access to the paper records of electronic voting machines in Sedgwick County, where she alleges there were unusual patterns that might suggest the machines had been tampered with.

Kobach said current Kansas law requires all ballots to be sealed after the final tallies are certified, a law he said protects the privacy of voters in very small precincts where one could look at such records and determine how an individual person voted.

The American Civil Liberties Union of Kansas is suing in Shawnee County District Court, seeking an order that would force Kobach’s office to accept federal voter registration forms, which do not ask for proof of citizenship. That case threatens to weaken the law substantially because if the plaintiffs win, any voter could circumvent the state law simply by registering with the federal form.

A federal lawsuit filed by Lawrence attorney and former Democratic legislator Paul Davis seeks to overturn the proof of citizenship law entirely as unconstitutional. It also seeks to block a new administrative rule Kobach enacted that automatically cancels a person’s voter registration application if they do not provide the proof of citizenship documents within 90 days.

A federal district judge is expected to announce a schedule for briefs and arguments in that case soon.