Sebelius chimes in on Medicaid expansion debates in Kansas, Missouri

Kansas City Mo. ? Former Kansas Gov. and U.S. Health and Human Services Secretary Kathleen Sebelius returned to the Midwest on Wednesday to chime in on growing debates in Kansas and Missouri over whether those states should expand their Medicaid programs, as allowed under the federal Affordable Care Act.

“In Kansas, a hospital just closed,” Sebelius said, referring to the pending closure of a community hospital in Independence, in southeast Kansas.

“The CEO of that hospital said there were a number of financial pressures, as there are in a lot of small towns, but he particularly identified the failure of the Kansas Legislature to push forward the Medicaid expansion as one of the significant cost issues that they just couldn’t balance anymore,” she said. 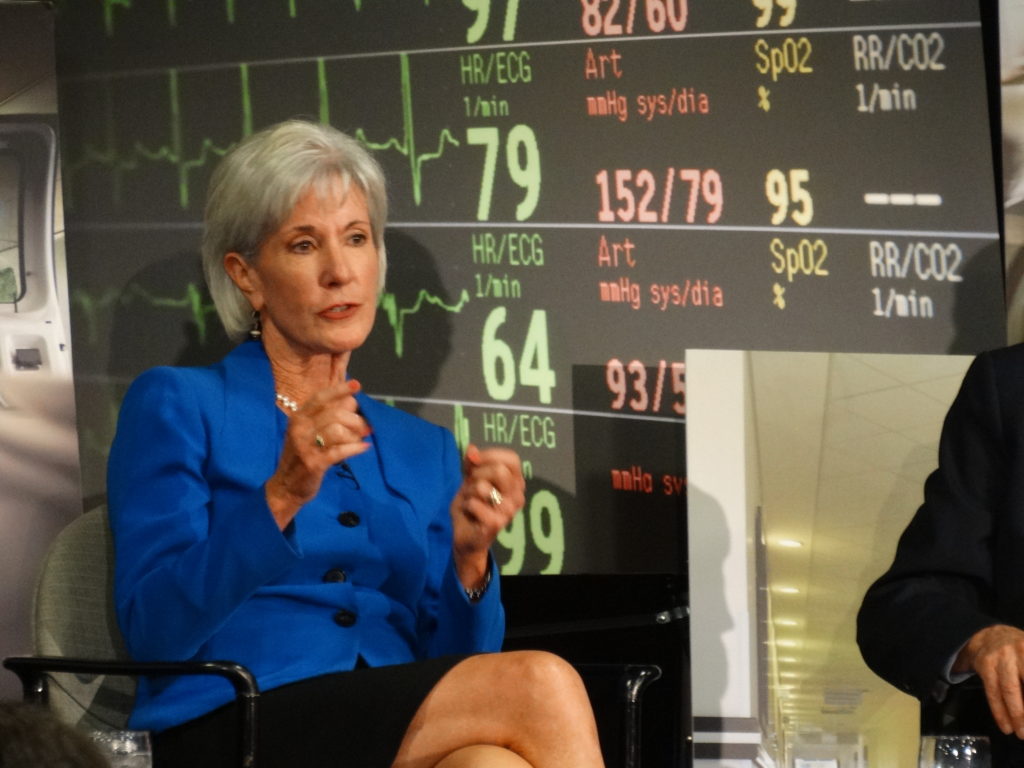 Kathleen Sebelius, the former governor and U.S. Health and Human Services Secretary, speaks during a panel discussion at the University of Missouri-Kansas City, urging both Kansas and Missouri to expand their Medicaid programs as allowed under the federal Affordable Care Act.

But Michael Cannon, a health care analyst for the conservative Cato Institute, said lower-income children and families would fare no better under an expanded Medicaid program and may actually be worse off than they would be in the private health care market.

“We shouldn’t be looking at Medicaid as a jobs program that’s supposed to keep hospitals in business and keep people employed there,” he said. “The point of Medicaid is to provide health care to the poor, to improve the health of the poor.”

“The problem is,” he continued, “that there is not evidence to show Medicaid actually helps the people it’s intended to help.”

Sebelius and Cannon were among the speakers during a panel discussion sponsored by American Public Square, a project of the University of Missouri-Kansas City, that tries to promote “civil discourse” about controversial social and political topics.

Sebelius, a Democrat, served as HHS Secretary when that law was passed in 2009 and continued in that job during the first troubled years of its implementation.

As it was originally written, the Affordable Care Act required states to expand their Medicaid programs to cover all individuals in households with incomes up to 138 percent of the poverty level.

In Kansas and many other states, Medicaid is only available to low-income elderly and disabled residents, as well as low-income parents of dependent children. But the income limit for working-age, able-bodied adults is about one-third of the federal poverty level, or $7,644 a year for a family of three.

To pay for that expansion, the federal law reduced a certain kind of Medicare reimbursement to hospitals, payments that compensated them for treating large numbers of uninsured individuals.

Sebelius said the idea behind that was that Medicaid expansion and other parts of the health reform law were supposed to greatly reduce the number of uninsured people, and therefore the hospitals would no longer need that subsidy.

But the U.S. Supreme Court later overturned the mandate that states expand their Medicaid programs, ruling instead that Medicaid expansion had to be an option for states. Since then, about 29 states have chosen to expand Medicaid; Kansas and Missouri have not.

The forum at UMKC came at a time when the debate over Medicaid expansion is heating up, especially in Kansas, where Democrats have recently vowed to make it a central issue in the 2016 elections and where a spokeswoman for Republican Gov. Sam Brownback recently called the idea “morally reprehensible.”

In an email message to political supporters this week, Brownback’s deputy communications director Melika Willoughby claimed that expanding Medicaid would divert health care resources away from the elderly and disabled, in favor of people who are less needy.

“Medicaid expansion creates new entitlements for able-bodied adults without dependents, prioritizing those who choose not to work before intellectually, developmentally and physically disabled, the frail and elderly, and those struggling with mental health issues,” Willoughby wrote. “This isn’t just bad policy, this is morally reprehensible.”

“It’s just nuts,” Sebelius said in response to that statement during a separate phone interview before Wednesday’s panel discussion. “I did see the statement, and it is just flat-out wrong.

“I think what the governor is probably talking about is that they have built an incredible waiting list because of budget shortfalls,” she said. “And to somehow suggest that this is the moral high ground, to leave people without health care is, to me, just an unbelievable argument to make.”

Since resigning as HHS Secretary in 2014, Sebelius has launched her own consulting firm that manages what she calls a “portfolio” of activities.

She serves on the boards of four different companies and does consulting work for a few others. She also does health policy analysis for the Aspen Institute.

Sebelius said she plans to be active supporting Democratic candidates in the 2016 elections but has not yet endorsed a presidential candidate.

She also emphatically ruled out the possibility of running for elected office anytime in the foreseeable future.