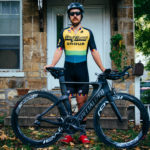 As the sun hit the eastern edge of Kansas early Friday morning, Ashton Lambie felt a burst of energy.

That spark was a welcome feeling, Lambie said. After all, he already had been cycling in the dark for more than 12 hours, traveling hundreds of miles.

“I was a little more with it after the sun came up,” he said. “I was kind of rebooted. It’s a huge motivator, that’s for sure.”

Thursday morning, Lambie began pedaling his Specialized bicycle along the side of a highway at the Colorado-Kansas border. His goal: To cycle east across the state of Kansas faster than anybody before him.

The record time to beat for the more-than-400-mile trip was 29 hours and 52 minutes, set by Tim Parks of McPherson in July 1993. Lambie’s hope was to complete the journey in 24 hours.

Friday morning, he rolled over the Kansas-Missouri border after 23 hours and 53 minutes of near-constant pedaling, shattering the old record by nearly six hours and even beating his personal goal by several minutes.

“I was super stoked when I crossed the border,” Lambie told the Journal-World on Friday night. “I knew I was going to beat it, but I set that benchmark for myself with 24 hours, and I knew it was going to be close.”

Consistency was the name of the game for Lambie’s successful ride, explained Andy White, who like Lambie works at Sunflower Outdoor & Bike Shop, 804 Massachusetts St. White was one of two people who officiated the ride. The two officials and Lambie’s crew — made up of his wife and parents — drove behind him for the entire route.

“He was motoring the whole time,” White said. “He’s just a machine. Unstoppable.”

Only stopping for flat tires — of which there were several — and bathroom/snack breaks every few hours, nothing dampened Lambie’s spirits, White said.

Lambie even kept his positive attitude when he found out his ride, originally planned to span 417 miles, was going to be a little longer than expected because of a road construction detour.

“He was all smiles,” White said. “He was tired, don’t get me wrong, but he was pretty much himself the whole time. That’s even with an additional 8-mile detour.”

Throughout the ride, Lambie said, he listened to audiobooks, which he’s found keep him more engaged than music during longer treks. However, nearing the final quarter of his journey, he hit a snag.

“My MP3 player died with like six hours to go,” he said. “So I had nothing for the last six hours. At that point I was kind of zoned out. Just cruising.”

Sunflower owner Dan Hughes and another shop employee met up with Lambie and his crew as they approached Ottawa, handing off a few spare inner tubes in case he encountered more flat tires. Hughes said flats are inevitable in the cycling world, but it can be tricky to estimate how many you’re going to have on such a long ride.

After the hand-off, Hughes helped cheer Lambie on for the last leg of the journey.

“You could tell he was tired, his eyes were red, but he was remarkably lucid,” Hughes said. “He was really focused.”

Lambie kept that focus even after he rolled into Missouri territory, White said, noting Lambie didn’t collapse or fall asleep once he finished — he was as sunny as ever.

“By the time we got done, he was perfect,” White said. “We loaded up and went and ate breakfast and talked about it all.”

With just a quick nap after his ride, Lambie said he was sore but feeling good Friday evening.

“There are all sorts of weird ailments you get after riding that far,” he said. “It’s not so much that my legs hurt, but my joints hurt from repetitive motion.”

White said the officials still have to submit the paperwork for Lambie’s ride to the Ultra-Marathon Cycling Association before his new record is finalized, a process that likely will take a few weeks.

But now that Lambie has accomplished his goal and is officially on the mend, he’s ready to relax for a while before tackling his next challenge.

“I’m pretty well on break now, I’ll just be eating more pizza,” he said. “There are a couple of races I want to do next year, but there’s a lot to happen between now and then.”

20 miles down. 20mph average. And it's flaaaaaaat out here. pic.twitter.com/6hotPqNB8O

Leg warmers off. Wheels swapped to a shallower Zipp 202 bc the wind is really picking up. #crossingkansas pic.twitter.com/sukeYToRZC

HALFWAY! The sun has set. Approaching the Flint Hills. Now it gets tough. #crossingkansas

Tired dude. After a quick break he's back on the bike and crushing it. The headwind has died down. #crossingkansas pic.twitter.com/FdmgZM4vgW

Road closure forcing a route change.
We are rerouting around a portion of hwy 50. Adds 8 miles to the total distance. #crossingkansas

Yo Emporia! We're 20 miles away! #crossingkansas

Just had an incredible moral boost from the fine folks of @DirtyKanza200 and @Drink_Mulreadys in Emporia! Nice to see friends at 3:00am!

Ashton was just cheered on by a storm trooper ringing a cowbell in the middle of the country. It doesn't get much better. #crossingkansas

358 miles down. He's in the homestretch. If he maintains this avg for the next 4 hours he's gold. #crossingkansas pic.twitter.com/MjrjXTNYUj

NO SLEEP TILL LOUISBURG. #crossingkansas

The traffic has been insane the last few miles. Def not helping with the stress level.

To clarify, the current record is 29+ hours. Ashton's goal is 24… And it's going to be damn close. 12 mi to go. #crossingkansas

That would beat the current record by more than 5 hours. Results pending official review from the UMCA, of course.

We cannot thank you all enough. To all the people who followed along, sent encouragement and cheered from the roadside– THANK YOU!