Topeka ? Republicans on a legislative committee that will oversee the state’s implementation of a plan to reduce carbon emissions from power plants said Thursday they would prefer to see those regulations overturned by federal courts.

“The EPA is out of control and they’re shifting a very costly program onto the users,” said Sen. Rob Olson, R-Olathe, who is vice chairman of the Legislature’s special Clean Power Plan Implementation Study Committee.

Lawmakers established that committee earlier this year in response to the EPA’s proposed new Clean Power Plan which, as currently drafted, will require all states to reduce carbon emissions from power plants 32 percent below 2005 levels by 2030. 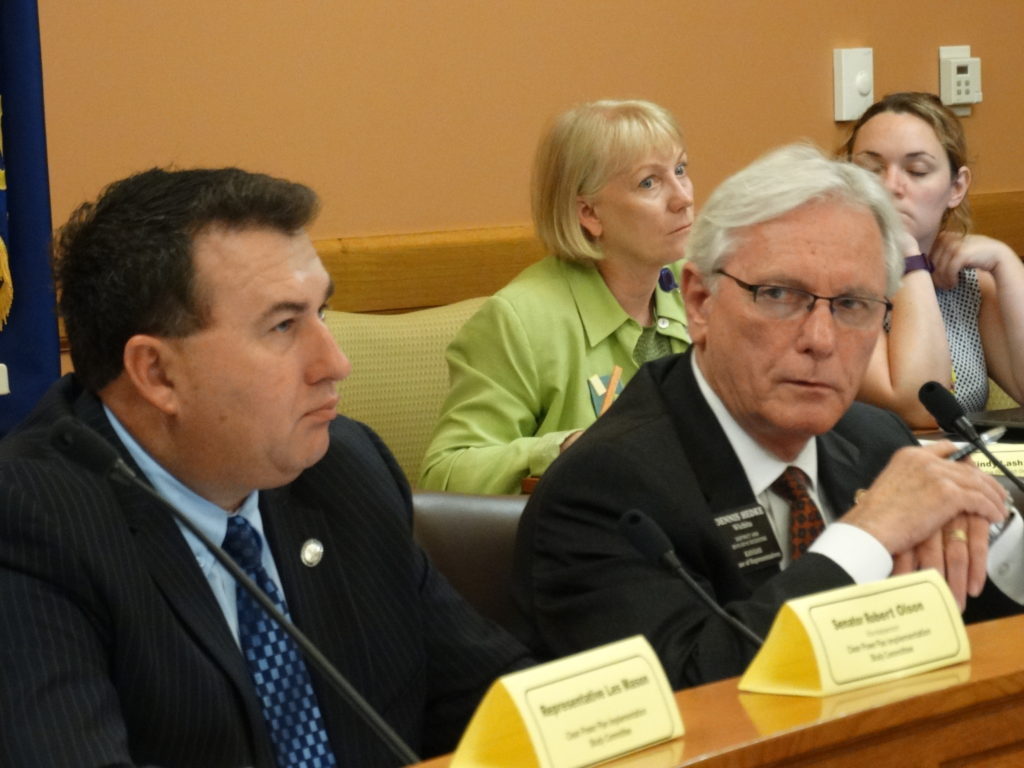 Sen. Rob Olson, of Olathe, left, and Rep. Dennis Hedke, of Wichita, both Republicans, head a special legislative committee that has authority to approve or reject any plan Kansas adopts to reduce carbon emissions from power plants. Both reject the scientific evidence that carbon emissions are contributing to global climate change.

The Clean Power Plan is intended to address the threat of global climate change, which has been linked to greenhouse gas emissions in the atmosphere, including carbon dioxide.

Under the new state law, however, the Kansas Department of Health and Environment is responsible for developing a plan for Kansas, but it must be approved by the committee before it can be implemented.

Olson and the committee’s chairman, Rep. Dennis Hedke, R-Wichita, have both stated publicly that they do not accept the scientific evidence linking carbon emissions with climate change.

The committee held its first day of hearings Thursday, with testimony coming almost exclusively from power industry officials who oppose the new rules, and from state agencies including Kansas Attorney Derek Schmidt’s office, which is joining several other states in challenging the proposed new rules in federal court.

“One of the things that is of great concern to our office,” Deputy Attorney General Jeff Chanay said, “is the fact that … the Environmental Protection Agency said (the Clean Power Plan) is designed to transform the domestic energy industry.”

“So essentially (the rules) manifest EPA’s policy judgement that’s never been enacted or authorized by Congress, that coal-fired power generation should be systematically disfavored in this country,” he said.

Chanay said that the attorney general’s office has joined with other states in challenging the new rules. But the U.S. Court of Appeals in Washington has refused to take the case until EPA finalizes the regulations, which it hasn’t yet done.

Sen. Marci Francisco, of Lawrence, one of only two Democrats on the 11-member panel, said she was glad state regulators were going to move forward with a plan, despite skepticism on the committee over the science of climate change generally.

She did, however, express concerns that the latest draft of the Clean Power Plan focuses almost exclusively on replacing fossil fuels with renewable resources such as wind and solar power to generate electricity, and no longer allows states to use conservation as a way of meeting the lower emission targets.

“My understanding is that’s because that would have been the hardest to defend, why the EPA should have any ability to regulate energy efficiency,” she said. “So we need to find another way to get to that place. Because if we simply had to build new generation and new transmission to meet the lower levels, it would be costly.”

The committee is not scheduled to meet again until after the start of the 2016 legislative session.