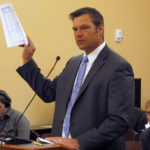 In this file photo from November 2014, Kansas Secretary of State Kris Kobach testifies during a meeting of a legislative study committee on election issues.

Since the law took effect in 2013, more than 32,000 Kansans have had their registrations placed “in suspense” because they failed to provide the required citizenship proof.

And now, under a new regulation by Secretary of State Kris Kobach, state and county election officers are actively purging the suspense voter list of any applications that have been pending for more than 90 days.

On Dec. 4, a federal judge in Kansas City, Kan., will hold a hearing in a case seeking to block election officials from doing that.

Meanwhile in state court, Shawnee County District Judge Frank Theis could rule at any time on a lawsuit filed by the American Civil Liberties Union that challenges Secretary of State Kris Kobach’s policy of holding “dual” elections for different categories of voters.

Under that system, first used last year, the only people allowed to vote in state or federal elections are those who registered using a state form and showed the required proof of citizenship, and those who were already registered before that law took effect in 2013.

Those who register using a federal form, which does not ask for proof of citizenship, are only allowed to vote in federal elections.

“In both of these cases, these are liberal organizations bringing lawsuits to challenge Kansas’ proof of citizenship law,” Kobach said. “These organizations represent a position that lost resoundingly in the Legislature. … It appears that some on the left end of the spectrum, even though the Legislature and people of Kansas are against them, they want a court to go the other way.”

But attorneys who are behind the lawsuits see it differently.

Mark Johnson is the lead attorney in the federal lawsuit seeking to block Kobach from purging the list of suspense voters. He also teaches at the Kansas University School of Law.

“What we’re going to be doing there is try to persuade the judge to stop the state from enforcing that rule because it interferes with people’s rights to vote in federal elections,” he said.

But some analysts say the more interesting case to watch, at least in the short term, is the Shawnee County lawsuit seeking to block the dual election system.

“In that case, we’re challenging the bifurcated election system that Kobach implemented, we say without any authority to do so,” said Doug Bonney, legal director of the ACLU of Kansas, which filed the case.

If his side prevails, Bonney said, it could render the whole proof of citizenship requirement on the state registration form meaningless because anyone would be able to fully register using the federal form, which does not ask for such proof.

The federal lawsuit also seeks to overturn the proof of citizenship law in its entirety on the claim that it is “overly broad and infringes on the rights of U.S. citizens to vote in local, state and federal elections.”

They also argue that the state law is superseded by the National Voter Registration Act of 1996, also known as the “motor voter” law, which requires states to recognize the federal registration form.

Johnson said, however, that the court will not consider that element of the case until sometime next year.

Kansas is one of only three states in the nation that divides the electorate into such categories, according to the National Association of State Legislatures. Oregon and Arizona are the others. And it’s an issue that neither state courts in Kansas nor the federal courts have yet addressed.

In 2013, the U.S. Supreme Court ruled in an Arizona case that states must accept the federal voter registration form for federal elections. But it did not directly address the question of whether states can demand proof of citizenship in order to register for state and local elections.

It did say that states could request the federal Election Assistance Commission to provide them with federal forms that comport with their particular laws. But when Kansas and Arizona made that request, the EAC refused. An appeals court later sided with the EAC, and the Supreme Court refused to review that decision.

Justice Antonin Scalia, who wrote the opinion in that case, noted that the U.S. Constitution is murky on the subject.

While the federal government can regulate how federal elections are held, he wrote, it cannot regulate who votes in them. And, “it would raise serious constitutional doubts if a federal statute precluded a State from obtaining the information necessary to enforce its voter qualifications,” he wrote.

In 2014, a survey by the Republican-leaning Rasmussen Reports found that 78 percent of respondents favored requiring voters to show proof of U.S. citizenship in order to register.