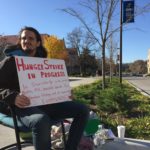 The fallout from this week’s Kansas University town hall forum on race — which brought overflow crowds and high emotions — continued into the weekend, with a call for KU Student Senate’s top three officers to resign and the initiation by one alumnus of a hunger strike on campus.

Wednesday’s forum drew a crowd of 1,000 to take part in a wide-ranging racial discussion — moderated by KU Chancellor Bernadette Gray-Little — that included faculty, staff, students and community members. During the forum, a student-led group calling itself Rock Chalk Invisible Hawk took the stage to read a list of 15 demands related to diversity and inclusion that have become central to the debate that has followed.

After the forum, the Senate’s Student Rights Committee passed a resolution in support of Rock Chalk Invisible Hawk’s demands, and the Student Executive Committee did the same at its meeting Friday. At that meeting, the committee also voted to demand the resignations of three of the Senate’s top officers.

On a 6-3 vote, with one committee member abstaining, the executive committee adopted “a motion of no confidence in the leadership of Student Body President Jessie Pringle, Student Body Vice President Zach George and Chief of Staff Adam Moon,” according to documents from Friday’s meeting.

As part of its motion against the Senate’s top officers, the committee demanded their resignations by 5 p.m. Wednesday, asking the full Senate to take up impeachment measures if Pringle, George and Moon refuse to step down.

Shegufta Huma, vice president of the University Senate and a member of the Student Executive Committee, told the Journal-World on Saturday the no confidence motion was the result of months of inaction that culminated in the officers’ reluctance to support Rock Chalk Invisible Hawk’s demands.

“This is part of a larger pattern and some much bigger issues that (the) Senate has been dealing with in terms of our relationship with marginalized communities at KU,” Huma said, arguing recent issues the Senate has addressed — such as concerns about voting hours, increases in the campaign spending limit for student elections and the use of gender-neutral pronouns — have been made without adequate collaboration with marginalized campus communities.

According to committee members who voted in favor of the motion, Pringle and George did not “stand in solidarity with their black peers and proclaim that Black Lives Matter” at Wednesday’s forum.

“Black students do not feel that the Student Senate provides adequate representation, funding and support for their needs,” the committee wrote.

On Saturday morning, the Senate released a statement signed by Pringle, George and Moon saying they plan to continue serving despite the call for their resignations.

But Huma was unimpressed with the officers’ statement of support, saying it came only after the threat of impeachment.

“This is the first time that they mention the lives of black students mattering, and that’s only after being directly called out,” Huma said. “The bottom line is that this is too little, too late.”

Madeline Dickerson, Student Senate Rights Committee chairwoman, characterized the call for resignations as an effort to focus instead on multicultural students who feel they are not being represented by the Senate, rather than a personal attack.

“Too many times students are asked to wait — ‘We’ll get it later, we’ll get it later’ — and that’s the issue,” Dickerson said Saturday. “It has been four months of this already, and things have not been done. They are not engaging in a conversation that is critical, and that is why there is a vote of no confidence.”

The student group Rock Chalk Invisible Hawk takes its name from a Twitter hashtag created in the wake of the August 2014 death of unarmed black teenager Michael Brown in Ferguson, Mo., and the decision not to indict the white police officer who killed him. KU graduate Cassie Osei created the hashtag last December, in response to what she called a lack of response to students’ concerns surrounding racial issues on campus. Osei told the Journal-World many of the demands made by the Rock Chalk Invisible Hawk student group are not new.

“Some of them have been in discussions for over two years — it’s not as if they are addressing this for the first time by getting up on stage,” she said Saturday. “People ignored it before.”

Osei said what is happening on KU’s campus is part of state and national events, such as the recent protests at the University of Missouri in Columbia, that have given more visibility not only to police brutality but micro-aggressions against people of color.

“College doesn’t exist in a bubble, so a lot of those things come to a head and manifest within the university students,” she said.

A lack of administrative support and a hostile environment negatively affect the educational opportunities of students of color, and recent events have brought wider attention to those issues, Osei argued.

“I think that now (it’s) becoming clear to more people who didn’t know those things, either because they didn’t really talk to their fellow students of color or they chose to ignore it,” she said.

Though the executive committee’s motion of no confidence has a Wednesday deadline, any change in leadership could be slow to develop.

According to the Senate’s rules and regulations, a bill of impeachment must be signed by one-fourth of the voting members of the Senate. It then proceeds through a potentially lengthy committee process that leads to an official hearing with majority support. A two-thirds majority vote, on roll call, is required to formally discipline the impeached party.

Dickerson thinks the officers need to step down so leaders who are focused on coming up with solutions to the concerns of marginalized students on campus can take charge.

“The end result would be having leaders in office who are not just there to please the majority of students and the administration,” she said, “and people in office who want to be on the right side of history and want to do what’s right for the students they are representing.”

In their statement, Pringle, George and Moon apologized for their failure to respond to the university forum in a timely manner and thanked Rock Chalk Invisible Hawk for presenting its demands. The student body leaders said that through collaboration, substantive and impactful change could be created.

“We have heard the call for action, and early next week we will publish our plan to address these demands and push for change,” they wrote.

In an email Saturday, Pringle told the Journal-World she saw the increased attention on minority student issues as a positive opportunity.

“This attention provides space for collaboration to address injustices of students on campus,” she said.

Sometime before the Student Executive Committee voted Friday, recent KU graduate John Cowan began a protest measure of his own — a hunger strike on campus.

In what he called a symbol of solidarity with student activist movements and the recent protests in Columbia, Cowan said he hoped to bring more attention to the issues of racial discrimination and sexual violence within the KU community.

“It’s my way of showing what I’m calling ‘starvidarity’ with the Invisible Hawks and September Siblings,” he said Saturday, seated in a chair at Wescoe Beach. “I like what they’re doing, and I’d like to see their demands met.”

Cowan, who began his strike at 10:30 a.m. Friday, said university officials told him he was allowed on campus as long as he wasn’t sleeping there, so he had neither eaten nor slept since the strike’s start. He had, however, brought along some coffee and juice.

If the activist groups’ demands are not met or if a plan of action is not issued by KU, “then I die or go to the hospital,” Cowan told the Journal-World, echoing the sentiments of Mizzou hunger striker Jonathan Butler, who held out for more than a week before his university’s president recently stepped down.

“I haven’t signed a ‘do not recuscitate’ letter yet, but I would not hesitate if one was put in front of me,” Cowan added.

Cowan, who is white, said his hunger strike was one way he could express support for others who are suffering.

“I’m kind of at an advantage because of my white privilege, so my suffering is self-inflicted,” he said. “Others don’t have that choice, it’s inflicted upon them.”

Cowan was arrested last November when he disrupted two KU classes while wearing a Guy Fawkes mask. He was released from jail about three hours later after posting a $1,050 bond.

KU’s Chancellor Gray-Little said in a message to campus Friday that her administration will begin sharing information “early next week” about how KU will move forward on the issue of racism.