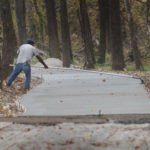 A worker from Classic Concrete smooths out new pavement Thursday for the path between Burcham and Constant parks, near the Kansas River. The new concrete path will connect to the paved Outside for a Better Inside Trail in Sandra J. Shaw Community Health Park, making it possible to walk along the Kansas River on a paved surface from Lawrence Memorial Hospital to City Hall.

City staff hopes to gain approval from the Lawrence City Commission on Tuesday to seek state funding for segments of the “Lawrence Loop,” an incomplete circumferential trail that’s been more than 20 years in the making.

The Kansas Department of Transportation announced in September that it would award an estimated $14 million for alternative transportation projects in 2016. The state is looking to fund projects that are pedestrian or bicycle related; include preserving historic transportation structures; offer safe routes to school; or improve scenic and environmental assets.

According to a memo from City Engineer Dave Cronin, the city wants to submit an application for a $750,000 construction project to complete four sections of the Lawrence Loop that add up to about 0.7 mile.

City staff is recommending applying for the funds to “continue with the ultimate goal of a completed loop,” the memo states.

The estimated construction cost is $750,000. If the city’s attempt to receive KDOT funding were successful, the city would pay 20 percent, or $150,000. The city would also be obligated to pay the estimated $100,000 in design costs.

The Lawrence Loop, when complete, will be 22.4 miles. Thirteen miles of the 10-foot shared-use path are already complete, and there are two areas currently in the works: the half-mile path between Constant Park and Burcham Park and a longer stretch along the under-construction South Lawrence Trafficway.

If the city’s proposal is approved and the four sections complete, the entire eastern half of the trail would be finished except for the half-mile between the BNSF Depot and City Hall.

With some of the grant funding, city staff would conduct a study for that segment that would include seeking public input on a preferred route.

Other unfinished areas in the northern and western sections stretch from Woody Park to Peterson Park; from Stonegate Park to East 1000 Road; and through Sports Pavilion Lawrence.

The project to create the trail started in the 1990s with the construction of the original west leg of the South Lawrence Trafficway. Through the years, more sections have been added, some using grant funding.

The city lost out last year on KDOT funding for the Lawrence Loop. That application asked for funds to continue the trail between Hobbs Park and Constant Park. It wasn’t funded because of uncertainty of the trail’s alignment, the memo states.

The four sections that would be included in this year’s application are already mapped out.

Part of the project, from City Hall to Constant Park, includes routing a path underneath the Massachusetts Street and Vermont Street river bridges, which could include a scenic river overlook between the bridges. To use the route, the city would have to gain right-of-way approval from BNSF Railway and construct a retaining wall.

The project also includes constructing a trailhead and parking lot near the BNSF Depot.

In a separate request for the same KDOT funding pool, the city wants to seek $200,000 for the second phase of its Safe Routes to School program.

In 2014, KDOT approved a grant application for the first phase of Lawrence’s Safe Routes to School program. The grant, $15,000, is being used to establish a plan to make paths to school more walkable and bikeable for kids.

A working group, along with school district staff and a survey of parents, determined sidewalks and crosswalk beacons surrounding Liberty Memorial Central Middle School and Woodlawn Elementary School would be the program’s first priorities.

According to a memo from project engineer Nick Voss, the city’s application would call for adding sidewalks where there are now gaps and installing 10 flashing beacons at school crossings that don’t have crossing guards.

The City Commission will consider Tuesday allowing city staff to move forward with the application. Commissioners will also decide in what order to rank this and the Lawrence Loop project when requesting the funds from KDOT.

Another transportation-related item the City Commission will consider Tuesday is providing a local match of $50,000 for Kansas University’s “streetscaping” project along Jayhawk Boulevard.

If approved, the $50,000 would come from KDOT funds annually provided for coordinated efforts between Lawrence Transit and KU Transit. KDOT allocated $1,054,945 to the fund in 2015.

KU plans to seek the majority of the funding for the project from the KDOT alternative transportation fund — the same grant opportunity the city hopes to apply to for the construction of the Lawrence Loop and Safe Routes to Schools.

According to a proposal, the project includes constructing a bus shelter between Strong Hall and Bailey Hall that would be modeled on a historic trolley shelter at the location in the early 20th century. There would also be kiosks installed that would display information about the historic trolley loop and the evolution of campus transit.

A new bus monitor would display bus arrival times, and the area would feature commissioned art.