Kansas City Connection: Don’t be a stranger to this pie social

After her grandfather passed away last year, Lawrence resident Tara Sloan decided to honor his memory by supporting a cause he was especially passionate about: the restoration of Little Stranger Church, a nearly 150-year-old wooden building just southwest of Leavenworth.

Although Sloan now lives in Seattle, she began working with Leavenworth resident Carry Ritchie to create a new website for the church and outline a series of goals for its restoration. Their efforts led to the church’s addition to the National Register of Historic Places last year, and a fundraising effort to restore the structure is currently underway.

From 1 p.m. to 4 p.m. Saturday, the church grounds will be open to the community for a pie social, which will include live music from area folk/bluegrass outfits The Kemps and The McKinney Sisters band (and, of course, plenty of pie).

The event is free to the public, but donations will be accepted toward the church’s restoration.

Little Stranger Church is located on the corner of Tonganoxie Road and Stranger Road, about 35 minutes from Lawrence. For directions and more information, visit facebook.com/LittleStrangerChurch.

If you haven’t been to First Fridays in the Crossroads neighborhood for a while, consider coming out this weekend to see exhibits from dozens of galleries and event spaces, including Glenn Kaino’s “Tank,” a visually stunning exhibit on display at Grand Arts through Saturday, June 6.

“Tank” presents dozens of species of coral growing and developing in 10 different aquariums, which are illuminated from above in an otherwise darkened gallery. Kaino has worked with marine biologists over the past year to develop the coral colonies, which are situated on pieces of decommissioned M-60 Battle Tanks. 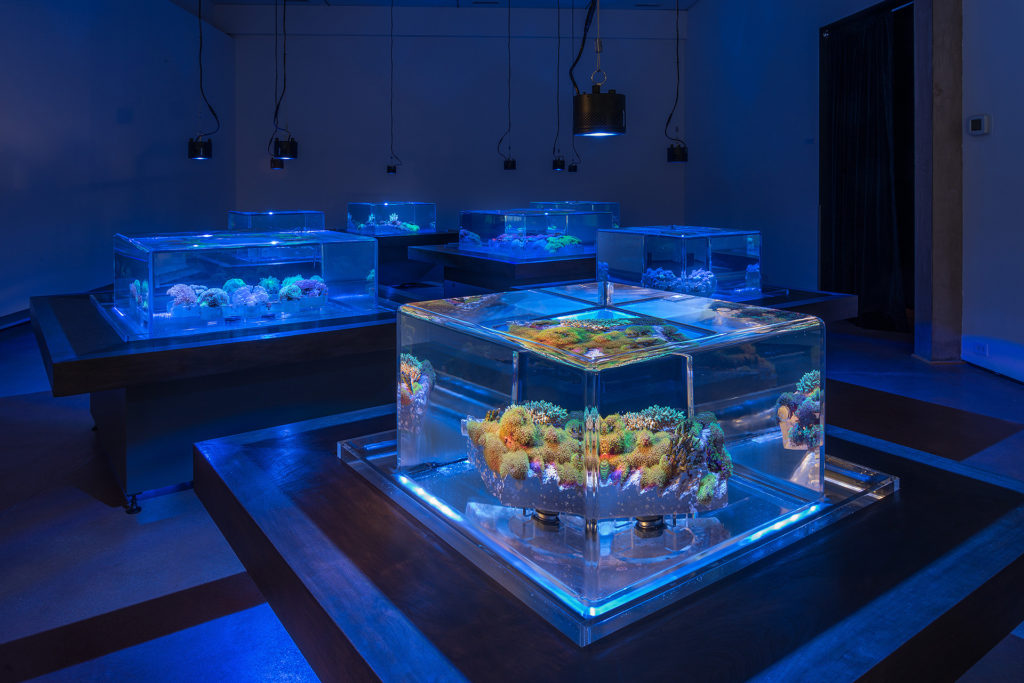 In addition to the contrast of tiny organisms growing on fragments of large instruments of warfare, the coral species themselves are competing for light and survival right before the viewer’s eyes, making this an exhibit that can be appreciated on several different levels.

On Friday, June 5 at 7:30 p.m., the Kansas City Zoo will hold its biggest fundraiser and the city’s wildest black-tie event. Jazzoo draws about 5,000 guests and volunteers each year, with live entertainment, food from over 65 restaurants and libations served at 10 different bars spread throughout the zoo grounds.

Tickets to Jazzoo cost $175 and are on sale at jazzookc.org.

Next weekend at the Kauffman Center for the Performing Arts, the Kansas City Symphony will present an especially romantic, brooding program, opening with the tragic strains of Richard Wagner’s “Prelude to Tristan und Isolde” and closing with Maurice Ravel’s luscious, passionate “Daphnis et Chloe.”

Tickets start at $23 for performances at 8 p.m. Friday and Saturday and 2 p.m. Sunday. Visit kcsymphony.org for more information.

Every time I hear the opening strains of Jimmy Buffett’s “Margaritaville,” I get out of earshot as soon as possible.

But on a road trip a few years ago, while stopping in a small cantina outside Pontchartrain, La., I sat with a few locals and watched Jimmy perform a live telecast to raise funds for those affected by the 2010 oil spill. “Some people say there’s a woman to blame,” he sang. “But I know that it’s all BP’s fault.” For one brief, magical moment, I was a Parrothead.

More committed Jimmy Buffett fans will want to visit the Sprint Center this Saturday for his 8 p.m. concert with special guest, Huey Lewis & the News.

— Lucas Wetzel is a writer and editor from Kansas City, Mo. Know of an upcoming event in Kansas City you’d like to see featured in Kansas City Connection? Email us about it at kcconnection@ljworld.com.