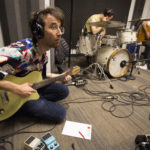 Lawrence musician Chris Luxem of the band CS Luxem works through the chorus of a song about the 17-year cicadas as he records in the sound and vision studio at the Lawrence Public Library with Mark Rockwell, drums, also with CS Luxem, and Jared Scholz of the Greenhouse Culture band. Both CS Luxem and the Greenhouse Culture band accepted an invitation from Lawrence Magazine to collaborate on the song and record it within a three-hour timeframe at the sound and vision studio without having practiced it beforehand. To see a video about the making of the song, please visit: ljworld.com/cicadasong

The thought of millions of cicadas emerging from the ground after 17 years under our feet — to breed and then die within weeks — is both fascinating and eerie. Two local bands have managed to capture those sentiments in a collaborative song honoring the burrowing insects.

The two bands — The Greenhouse Culture Band, an Indie-rock Christian group; and CS Luxem, described variously as psychedelic and punk-oriented — were invited by Lawrence Magazine, which is owned by The World Company, to participate. The task: to walk into the Lawrence Public Library’s Sound + Vision recording studio and come out with an original song on the theme of the periodic cicadas.

The bands, which had never worked together before, wrote and recorded the song in about four hours on Wednesday, with each musician contributing ideas. Christopher Luxem — vocals, guitar and bass for CS Luxem — wrote most of the music. Luxem said the time crunch had positives and negatives.

“It’s both invigorating and challenging,” he said.

The cicadas, which have already begun emerging throughout northeast Kansas, have one goal to accomplish in their short time above ground: to breed. To that end, the male cicadas cluster in huge groups to amplify their buzzing mating song — their own form of collaboration.

Jared Scholz — vocals and guitar for Greenhouse Culture — wrote most of the song’s lyrics. Scholz said the two bands seemed to find the balance between group consensus and individual vision.

“Striking that balance is a powerful thing,” he said.

Touching on the cicadas’ ephemeral existence above ground, one verse of the song goes:

“You can rip your wings, take a ride, pull the shades and hope to die.”

But the upbeat song is far from fatalistic. The chorus builds toward a kind of reverence for the insects, saying:

“Wake up, wake up. Rise up, rise up. You’ve got breath, so breathe. You’ve got song, so sing. You’ve got her and me. The choir agrees, find your part and sing.”

In all, six musicians worked on the song. For CS Luxem, in addition to Luxem, Mark Osman — on drums and shaker — took part. For Greenhouse Culture, in addition to Scholz, there was Addison Sauvan, guitar; Kalah Sipp, vocals; and Matt Baldwin, tambourine and bells.

Matt Pelsma, the audio engineer for the collaboration, said group efforts aren’t always easy; he thinks this one worked because of honest communication and respect for each contributor’s musical talent.

“None of us really knew each other, so it’s kind of cool that we were able to make a song within such a short time frame,” he said.

The song will be posted, likely by next week, on the Lawrence Music Project website, which is organized by the library.