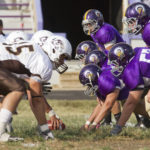 In this file photo from Oct. 8, 2011, the Haskell defensive line lines up across from Quincy University during a game at Haskell.

In a move that stirred up emotions across campus, Haskell Indian Nations University on Thursday announced that it has suspended its football program for the 2015 season, citing a lack of funding as the main reason.

The initial announcement came early Thursday afternoon on the school’s Facebook page for its athletics programs and included no explanation.

“Football suspended for the 2015 season…” read the post, which was eventually removed.

A few hours later, in a news release sent out from the president’s office, Haskell officials detailed the reasons behind the decision, and Stephen Prue, executive assistant to the president, talked with the Journal-World about all that went into it.

“This isn’t a decision that was arrived at easily,” Prue explained. “This has been something that previous (Haskell) presidents have looked at and we’ve come to that point, like a lot of small colleges, where the amount of money to put on a sport like football and be able to compete at a high level is more than we have available.”

Prue, a 2002 Haskell graduate himself, said Haskell President Venida Chenault takes the safety of the school’s athletes very seriously and emphasized that the cost of maintaining a football program goes well beyond uniforms and road trips.

Haskell Stadium, which both Free State and Lawrence High used for years — and even made an offer to turf the field a little more than six years ago — is nearly 100 years old and in drastic need of upgrades.

“We have to be very realistic about the football program,” Prue said. “Our president has great concern about the equipment and the safety of the players and the training table and all the things that go into fielding a highly competitive program.”

For now, Haskell officials determined that’s just not possible. However, that does not mean it will remain impossible in the future. At this time, the suspension of the program is for the 2015 season only, and Prue said he hoped that those who might be hurting today but have pride in the rich history of Haskell football will step up to help keep the program alive.

Three of those people, all current Haskell football players, made themselves known Thursday afternoon through a visit to Prue’s office.

“We feel so bad for our student-athletes,” said Prue, referencing last season’s 61-man Haskell football roster. “There’s just never a good time to come to a decision like this. But I was really appreciative of those young men because they were respectful. You know they’re upset, you know they’re hurting inside, but they stepped up and said we want to do something.”

With the university currently searching to fill its vacant athletic director’s office, plus funding issues, both in athletics and academics, continuing to pose challenges year after year, Prue said school officials remained hopeful but realistic about the future and the need for help.

“I’m sure we’ve got students and parents that are upset,” Prue said. “But one thing we’d encourage folks who love athletics here at Haskell to do is make a donation to the (Haskell) Foundation. That’s something people can do that’s both positive and can have a significant impact on our athletic department.”

Given the current landscape, he admitted that envisioning football returning to Haskell without the help of some kind of third-party funding seemed far-fetched.

Because federal funding allows Haskell to not charge tuition, the school does not give out athletic scholarships. Student-athletes do sign letters of intent, but they’re not filed under the same rules as the NCAA. Because of that, Prue said any current Haskell football players who would like to transfer to another school would receive help in the form of support and letters of recommendation.

Those members of the team who were still on campus for summer school were told about the school’s decision at a meeting in the auditorium on Thursday.

“We wanted to tell people to their face,” said Prue, adding that Haskell football coach Rich Brewer left the program a couple of weeks ago to pursue what he called “a career move.”

Those players who could not attend the meeting, received the news via email, from friends on the team or social media, which revealed just how outraged several members of the current team and their families were.

“What a joke,” wrote one current Haskell football player on Twitter. “I’ve put in three years of non-stop hard work for nothing.”

Haskell has compiled a record of just 3-35 during the past four seasons, but there was no indication whatsoever that performance on the field had anything to do with Thursday’s decision.

“I’m sure some people feel like this is a dark day,” Prue said. “But we want to make a positive out of this. It’s a pretty tall hill we’ll have to climb, but native people are resilient and always have been in the past.”

Haskell will conduct a review of nine other athletic programs and said in the news release Thursday that it expects to support only six.