Topeka ? Kansas lawmakers are threatening to cut off all funding for the judicial branch of state government if the Kansas Supreme Court strikes down a law enacted last year spelling out how chief judges in the district courts are selected.

House and Senate budget negotiators agreed to the language Monday in a bill that would fund the judicial branch for the next two years. 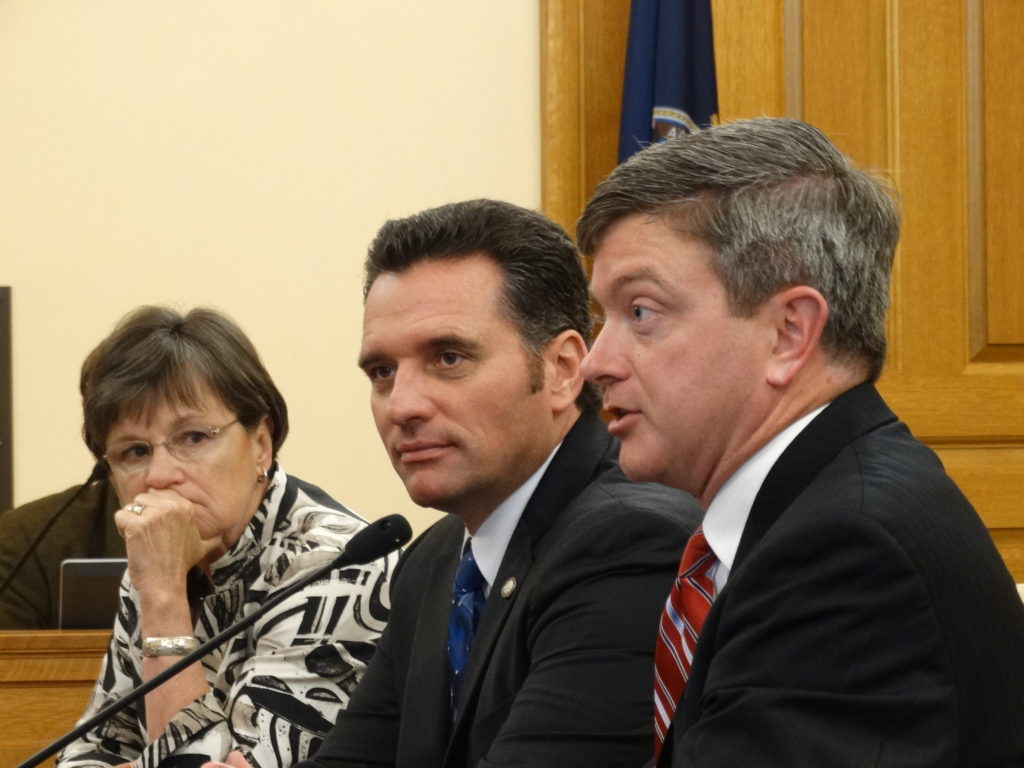 Sen. Jeff King, right, R-Independence, leads the Senate negotiating team over a budget that ties funding for the judicial branch to the outcome of a pending lawsuit. Also at the table are Sen. Ty Masterson, R-Augusta, who chairs the Ways and Means Committee, and ranking Democrat Laura Kelly, of Topeka, who opposes the plan.

The language is similar to the judicial funding bill enacted last year. In that bill, lawmakers inserted a provision that says chief judges must be elected by the other judges in the district. It abolished the previous system in which the Kansas Supreme Court appointed the chief district judges.

Both last year’s bill and the one being considered this year would contain a “non-severability” clause, meaning if one part of the bill is struck down by the courts, the entire bill, including its funding provisions for the courts, would also be struck down.

Sen. Jeff King, R-Independence, who chairs the Senate Judiciary Committee, said the issue about how chief judges are named is a matter of “local control” over district courts because chief judges have a great deal of discretion in allocating district court funds, hiring staff and even assigning cases to other judges.

“Having funding decisions decided at the level of government closest to the people is something I personally believe in, and was a policy behind the block grant bill we passed this year for schools,” King said.

In February, Judge Larry T. Solomon, chief judge for the 30th Judicial District in Kingman County, filed a lawsuit seeking to strike down the new selection system as a violation of the separation of powers doctrine.

Article 3 of the Kansas Constitution gives the Supreme Court, “general administrative authority over all courts in this state.”

Rep. Boog Highberger, D-Lawrence, who serves on the House Judiciary Committee, said he opposed the language.

“I think the judicial branch should be funded according to its needs, and not tied to any opinion or court decision,” he said.

Rep. John Carmichael, of Wichita, the ranking Democrat on the House Judiciary Committee, said he believes the language is meant to send another message to the courts.

“It leads me to only one conclusion, and that is that the Legislature is attempting once again to hold a gun to the head of the courts in an attempt to intimidate the courts into ruling in the school finance case in a way that pleases some members of the Legislature,” Carmichael said.

Carmichael, an attorney who practices in Wichita, said the selection of judges has been a hot issue in the Sedgwick County District Court, where judges are elected in partisan races. For several years, he said, the chief judge of that court was a Democrat while the majority of judges on the bench were Republicans.

King denied the suggestion that the bill threatens to close down the court system if the Supreme Court strikes down the new selection policy.

“We’re saying that the policy and the budget pieces are interlinked,” King said. And if the Supreme Court should strike down the policy on naming chief judges, “then we would have to re-evaluate the budget based on knowing that we don’t have that policy provision.”

The bill now goes to the floor of both chambers. And because it is a conference committee report, lawmakers can only vote yes or no on the bill, and they cannot offer any amendments.