Topeka ? Kansas Board of Regents members and other higher education officials expressed outrage Wednesday at a higher education budget proposal now before the Senate Ways and Means Committee that shifts millions of dollars in funding between two of Kansas University’s campuses and makes direct cuts to Kansas State University.

That plan, which was approved last week by the panel’s education subcommittee, shifts $9.4 million over two years from Kansas University’s Lawrence campus to the KU Medical Center campus in Wichita to increase the number of doctors who can take all four years of medical school there.

“I think the action taken by that subcommittee starts the state down the wrong path. It starts the state down a really disastrous path,” said Regent Fred Logan of Johnson County. “On the surface it appears to just be a cut to KU and Kansas State University. But I would argue that the kind of attack made on those two research institutions is really an attack on all of the universities.”

Sen. Tom Arpke, R-Salina, who chairs the education subcommittee, said the shift in funding for KU was intended to help KU’s medical school train more doctors who practice in rural areas. He said the cut to Kansas State was an extension of Gov. Sam Brownback’s allotment cut to the universities in the current fiscal year.

But Regents Chairman Kenny Wilk, a former legislator from Lansing and a former chairman of the House Appropriations Committee, said the idea of shifting money between universities, or even between campuses of a single university, sets a dangerous precedent. 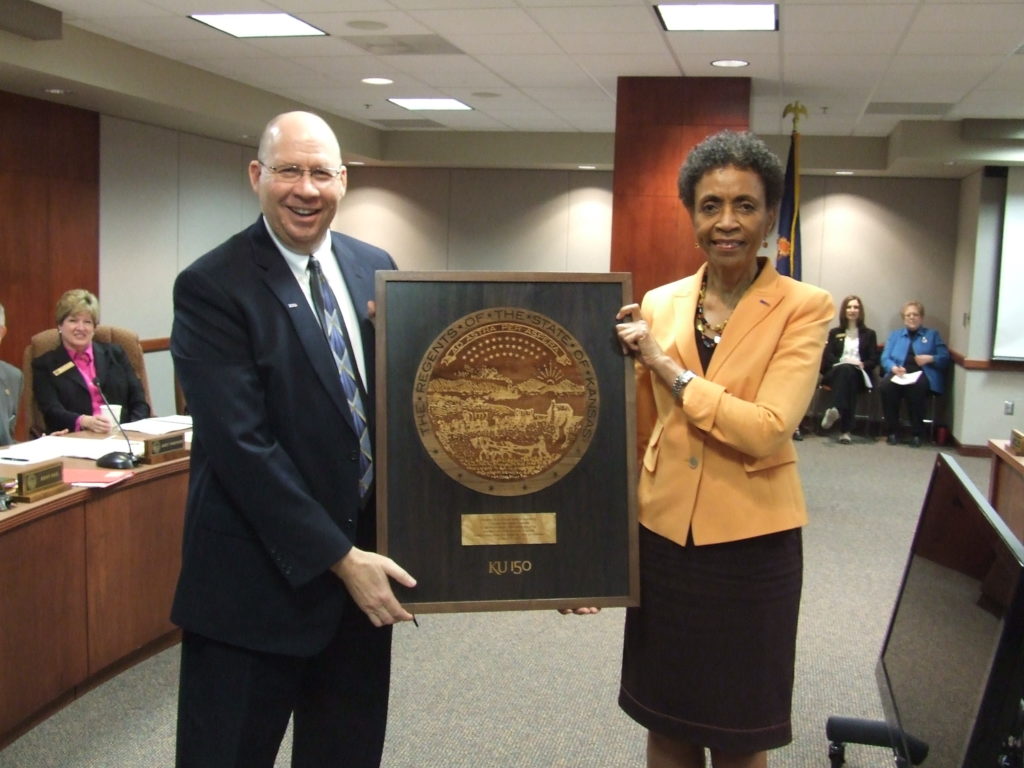 Kansas University Chancellor Bernadette Gray-Little, right, presents a woodcut plaque of the Board of Regents seal to Regents chairman Kenny Wilk during the board's monthly meeting Wednesday. The plaque commemorates the 150th anniversary of the founding of KU. Gray-Little said the woodcut was crafted at the Visual Art Studio Technology lab at KU using a precision laser cutting system. The work was created by Garrett Brown, resource lab coordinator, and Haley Crouch, a senior industrial design student.

Since the 1990s, Wilk said, universities have been funded on a block grant system in which the Regents decide how state funding for higher education is distributed among institutions.

“What this board does, how we go about looking at the dollars, is strategically driven,” he said. “It’s driven by our strategic plan, and I would invite anybody — and I would especially invite the media — if they have questions about strategic direction, ask us. Ask the six university presidents here. Ask any one of the community colleges.”

KU Chancellor Bernadette Gray-Little and Kansas State President Kirk Schulz both said legislative tinkering with the allocation of higher education funding will make it difficult for them to make long-term plans.

Gray-Little noted as an example the fact that KU received $35 million in additional funding in 2011 to expand its engineering school as part of an effort promoted by Gov. Brownback to increase the number of engineering graduates.

“In order to do that, we need to hire, I believe it’s 30 new faculty members over a period of time to accommodate those new students,” Gray-Little said. “Being able to make that hire depends on being able to count on resources. This kind of change makes it very difficult so that even the commitment that we made to the state, with the state’s help, makes it harder and harder when we can’t plan on what our funding is going to be.”

Schulz said the Senate proposal could make it more difficult for Kansas State to hire and retrain top faculty for any program.

“I’m very, very concerned about the long-term implications of me trying to get outstanding leadership and faculty and staff to move to Kansas and Manhattan when they’re going to say, ‘Well, what if the Legislature reaches down and decides to cut my program right out of the block grant,” Schulz said.

The full Senate Ways and Means Committee accepted the subcommittee report last week. That report will become just one part of the overall budget bill that the committee will begin debating next week.