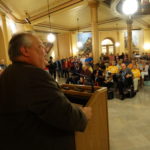 Tom Witt, director of Equality Kansas, speaks to a throng of gay rights supporters in the rotunda of the Kansas Statehouse moments after the U.S. Supreme Court declared same-sex marriage to be legal in all 50 states.

Topeka ? Gay rights activists in Kansas were elated Friday at news that the U.S. Supreme Court had declared same-sex marriage legal in all 50 states. But conservatives who support the state’s 10-year-old ban on gay marriage decried it as an “activist court” trampling on states’ rights.

“Today is a day we cease to be second-class citizens in the state of Kansas,” said Tom Witt, executive director of Equality Kansas, a gay rights advocacy group.

Witt was in the Statehouse in Topeka Friday for a previously scheduled rally that coincided with the Legislature’s “sine die” ceremony to officially end the 2015 session. He said it was poetic justice that he would be in that building on the day the court decision came down.

“I didn’t get involved in politics until the marriage ban started getting moved through this building back in 2004 and 2005,” he said. “So to be here at the moment they overturned that ban was a great moment.”

But Sen. Susan Wagle, R-Wichita, who was one of the lawmakers who was instrumental in passing the 2005 constitutional amendment in Kansas that outlawed same-sex marriage, was less thrilled about the decision.

“I’m deeply disappointed in our activist Supreme Court. They’ve made two bad rulings two days in a row,” Wagle said, referring also to Thursday’s decision upholding a key part of the Affordable Care Act. “They’re overruling the will of the people and rewriting the law in both instances.”

Republican Gov. Sam Brownback, who was serving in the U.S. Senate in 2005, issued a statement condemning the decision.

“Activist courts should not overrule the people of this state, who have clearly supported the Kansas Constitution’s definition of marriage as being between one man and one woman,” Brownback said.

Kansas lawmakers passed a resolution in 2004 to put a constitutional amendment on a statewide ballot defining marriage in Kansas as a union between one man and one woman only.

The amendment passed in April 2005 with 70 percent of the vote statewide. Douglas County was the only county in which a majority of voters, 63 percent, said no to the amendment.

Topeka attorney Pedro Irigonegaray, who was also in the Statehouse Friday for other business, was among many civil rights lawyers in Kansas who lobbied against passage of the amendment.

“I was here during those debates, and I told them what they were doing was wrong, bigoted and absolutely against the Constitution,” Irigonegaray said.

Since then, the tide of public opinion on gay marriage has shifted dramatically, and courts quickly began to reflect that cultural change,” Irigonegaray said.

Don Haider-Markel, a Kansas University professor of political science who has studied the issue, said he has been “amazed” by how quickly and how dramatically the courts and public opinion have moved on the issue of same-sex marriage.

Less than 10 years ago, Haider-Markel was operating under the notion that a move to legalize same-sex marriage “would not be successful in any reasonable amount of time,” he said. After years of lower-court rulings that had limited success and attracted limited public excitement, he said, on Friday “the whole slate has been wiped clean.”

In October, the U.S. Supreme Court refused to hear appeals in several cases in which appellate courts had overturned state marriage bans similar to the one in Kansas. Two of those cases, from Utah and Oklahoma, came out of the 10th U.S. Circuit Court of Appeals in Denver, which has jurisdiction over federal district courts in Kansas.

Within days, the Johnson County District Court began issuing marriage licenses to same-sex couples, only to be halted by the Kansas Supreme Court. But then the American Civil Liberties Union filed a federal lawsuit in Kansas City on behalf of same-sex couples in Douglas and Sedgwick counties.

In November, U.S. District Judge Daniel Crabtree granted a temporary injunction, ordering the court clerks in those two counties to issue marriage licenses to same-sex couples, saying the plaintiffs were likely to prevail in the case.

Next steps in Kansas

That case has not yet gone to trial, and an ACLU attorney said Friday that it’s too soon to tell whether the Supreme Court’s latest decision would render the Kansas case moot.

“The court has certainly ruled that marriage equality should be the law of the land, and all couples should have their marriages recognized,” ACLU lawyer Micah Kubic said. “But we have to wait and see how the governor and administration respond to that and what kind of recognition they will afford.”

Still at issue in Kansas are issues such as whether the state will grant same-sex couples the right to file joint tax returns, change their names on driver’s licenses after they marry, or provide spousal benefits, including family health care coverage, to state employees involved in same-sex marriages.

“I don’t know the answer,” Secretary of Administration Jim Clark said when told of the decision. “I know for a fact we’ve not done any planning for it, so obviously we’ll have to do that.”

Lawrence attorney David Brown — who has represented LGBT clients since opening his office in 1992, recently including a couple challenging the Kansas tax code in a Shawnee County District Court case — called the Supreme Court decision a long overdue recognition but said he expects more fighting for “equal and fair treatment.”

“In Kansas, where state government has refused to recognize even those same-sex marriages performed in Kansas under federal court order, the battle has only just begun,” Brown said.

Brown called Brownback’s comments “disrespectful of the legal process” and “despicable when coming from a governor.”

On divisive issues like same-sex marriage, politicians must “put up a public front” for their constituents, said Patrick Miller, assistant political science professor at KU. For example, he said, “Brownback, no matter what he feels, his voters are not fans of same-sex marriage.”

However, Miller said lawmakers’ statements only matter so much in the face of the Supreme Court ruling.

“They really, in the end, have no choice but to comply with it,” Miller said. “If Kansas does anything to resist this ruling it’s just going to lead to a series of federal lawsuits that the state’s going to lose.”

Rep. Boog Highberger, D-Lawrence, said he is confident the Supreme Court ruling on marriage equality will be enforced in Kansas.

“We’ll make sure it’s legal in Kansas too, whether the governor likes it or not,” Highberger said.