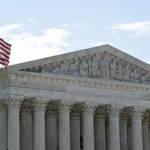 The American flag flies in the wind in front of the Supreme Court in Washington, Monday, June 22, 2015.

Topeka ? While the nation waits for a U.S. Supreme Court ruling on a key provision of the Affordable Care Act, Kansas Republicans are gearing up for the next round of fights over the federal health insurance reform law.

The case challenges a policy of the IRS that allows people in states like Kansas, which did not establish their own state-based exchange markets, to receive federal subsidies to buy insurance on the federally run exchange.

At stake are the health insurance policies of nearly 70,000 Kansans who bought subsidized policies on the federal exchange, according to the U.S. Department of Health and Human Services. That includes about 5,000 people from Douglas County.

“If those subsidies go away, there’s no way a lot of these people could keep their coverage,” said Sean Hatch, spokesman for Heartland Community Health Center in Lawrence, which serves as a “navigator” site to help individuals sign up for coverage.

According to the Kaiser Family Foundation, the average cost of those policies would increase 231 percent if the federal subsidies were no longer available.

The Affordable Care Act allows the federal government to pay subsidies, in the form of tax credits, to people who buy policies on state-based exchanges. But it also sets up a federal exchange marketplace for individuals who live in states like Kansas that choose not to establish an exchange.

Plaintiffs in the case argue that the law does not specifically authorize the subsidies for customers of the federal exchange.

The high court is expected to rule on the case at any time in the next few days. And as the day of the decision draws closer, leading Kansas Republicans have been staking out positions for what they expect to be the next round of fights.

On Monday, 70 GOP members of the Kansas Legislature sent a letter to Republican congressional leaders, urging them to repeal much of the remainder of the health care law, also known as “Obamacare,” if the Supreme Court strikes down the subsidies.

“Our state of Kansas declined to establish and fund a state-run exchange,” the lawmakers wrote. “We are unwilling to subject taxpayers to the millions in added costs and expanded bureaucracy associated with creating one.”

The letter was written by Rep. Dan Hawkins of Wichita and Sen. Mary Pilcher-Cook, the respective chairs of the Kansas House and Senate health committees.

In 2010, Kansas was awarded a $31.5 million federal grant to establish an exchange. But soon after coming into office in 2011, newly elected Gov. Sam Brownback, a Republican, rejected the grant, and his administration has continued to oppose implementing any part of the federal health law.

Former Kansas Insurance Commissioner Sandy Praeger, a Lawrence Republican, called the letter “political posturing” and said she thinks lawmakers are worried that if the subsidies are overturned, they will come under increased pressure to implement another part of the law, expansion of Medicaid.

That would allow an estimated 180,000 Kansans with incomes up to 130 percent of the federal poverty level to receive free coverage through the state’s Medicaid program, with nearly all of the cost being paid by the federal government.

“I was so annoyed when I saw it,” Praeger said about the letter. “They would put this political agenda above the lives of 180,000 Kansans that are not getting to take advantage of Medicaid expansion.”

Meanwhile, Kansas Attorney General Derek Schmidt is saying the federal government is already pressuring states like Kansas to expand Medicaid, and on Tuesday he joined attorneys general in several other states in calling for a congressional investigation into the activity.

Schmidt and the other attorneys general said HHS has told Kansas and other states that have not expanded Medicaid that they risk losing other federal funding, known as the Low Income Pool, that subsidizes hospitals for treating the uninsured.

Last year, Schmidt filed a friend of the court brief with a federal appeals court in a lawsuit similar to the one now pending before the U.S. Supreme Court. In that case, he urged the courts to strike down the IRS policy that allows subsidies to be paid to people who buy insurance on the federal exchange.