Good as new? KU tissue engineering steps in when injured bodies can’t do it alone 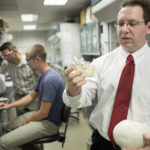 Michael Detamore, director of the biomaterials and tissue Engineering Laboratory at KU, describes how 3-D printing technology is being researched at KU in tissue engineering efforts focused mainly on bone and cartilage regeneration. In background working with a 3D printer at left is Stefan Lohfeld, Marie Curie Visiting Scientist at KU, and incoming freshman Mason Wilde, Louisburg.

“Wouldn’t it be nice if you could just replace it, and it’d be like new?” Kansas University engineering professor Michael Detamore says.

And when he says “like new” he doesn’t mean bionic.

Detamore, a biomedical engineer, specializes in tissue engineering. In his labs at KU, he and students are building various replacement parts designed to transform over time into the real thing.

What is tissue engineering?

Doctors encounter all kinds of injuries and conditions where the body can’t heal itself, Detamore said. “We’re trying to creatively solve those problems.”

Detamore’s tissue engineering projects are in various stages, with some just beginning and others that have shown success in animals and could be tested on people in the near future.

He works with various materials, including human stem cells through the Umbilical Cord Matrix Project at KU. But bone and cartilage are a primary focus.

KU Hospital craniofacial surgeon Brian Andrews, working with Detamore on replacement skulls, said the professor is fast becoming a world expert, particularly in the area of 3-D printing with biomaterial.

“He’s someone who is really going to change medicine someday, without being a medical doctor,” Andrews said.

The idea for the jawbone project, still in early stages, is to use a 3-D printer to create a new condyle — the end of the jawbone that fits into the socket — to match the shape of what’s missing.

The material shooting through the printer is a special combination of plastic and mineral substances naturally found in bone. The replacement part acts as a scaffold to guide new bone growth in the right direction, Detamore said, but the special material is designed to slowly disintegrate over time at about the same speed natural bone fills in.

The new “bone” is also capped with new “cartilage,” made of hydrogel and applied layer by layer using a different 3-D printing method called stereolithography.

Andrews’ patients suffering from traumatic brain injury caused by blunt trauma or strokes require surgery to remove an entire side of the skull, allowing their brains to swell.

During the weeks to months before Andrews can put the skull back, patients’ heads sink in like a divot from a 9-iron and many experience severe headaches and problems with motor function, he said.

In the meantime the bone, which is living tissue, must be “banked,” Andrews said. It’s either implanted in the patient’s abdomen — though in children or thin people there’s not always enough space to do this — or stored in a sterile freezer — and sometimes is no longer viable when it comes out.

He’s researching a paste that could immediately replace the removed skull, remain flexible enough for the brain to swell for a time, then ultimately regenerate into bone.

“It works, but it leaves an area that we have to harvest from that could potentially have problems,” Weatherly said. Pain, infection and the piece not fitting right are all risks.

Detamore’s lab is creating a patch that would start out rigid enough to support the trachea but eventually bio-absorb so natural tissue could grow in its place, Weatherly said.

The patch, which emulates the ridges and curves of a natural trachea, is created with a 3-D printer and another machine that spins fine strands of polymers over the top, Detamore said. Doctors could simply pull the product off the shelf.

Also in the works is a pastelike replacement cartilage derived from organ donor’s natural cartilage, as well as regenerative cartilage plugs for knee injuries, a project that has been successful in sheep and for which Detamore has formed a company to get to clinical trails and ultimately on the market.

Though KU does have a bioengineering graduate program, it does not have a biomedical engineering program. Detamore is a professor in the Chemical and Petroleum Engineering Department.

His students include chemical and mechanical engineering and biology majors.

The research process takes a long time. Detamore said he’s been working on the knee plugs since shortly after arriving at KU in 2004.

He said he hopes his work will inspire the next generation, and hopefully also help some people earlier than that.

“Physicians are limited by the technology that’s developed by biomedical engineering,” Detamore said. “I like the idea of being creative and coming up with new ideas that can help improve quality of life for people.”